(The newest and most cutting edge stuff is at the very bottom, people, so if you don't want to look at all the pictures, skip to the bottom for the video.) 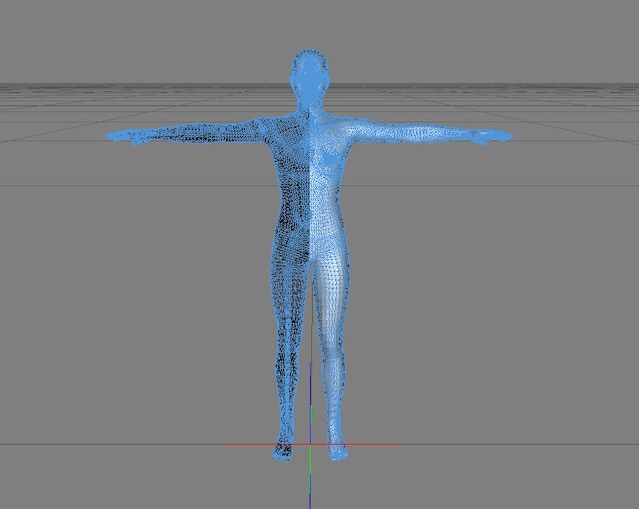 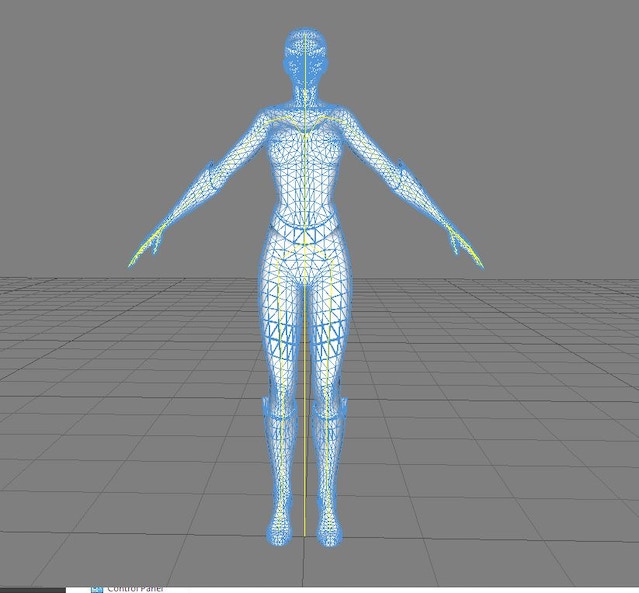 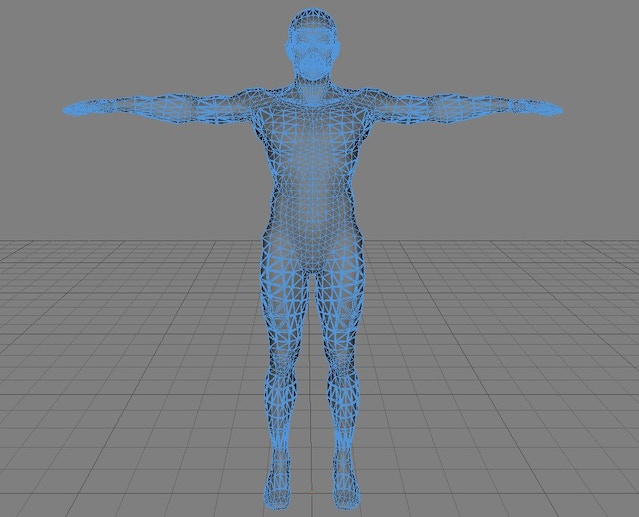 We designed our first body to be androgynous, so it could be used for male or female, and clothes would fit either way.

Our first attempt, we accidentally left half of it inside out. 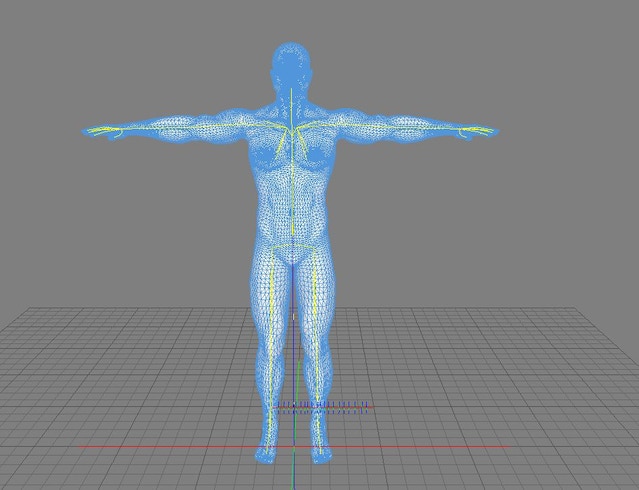 Our second attempt… well, we learned that you can’t convincingly really do that, things bunch and break. But it was a good first attempt. Our second attempt, we went to a professional. We got something that looked okay.

Then we started finding the real problems. Polygons of the wrong shape. Mesh loops that were sliced halfway through. And the professional wasn’t able to fix it. But it’s okay. We learned. We learned a lot. Our third attempt, we did it ourselves. 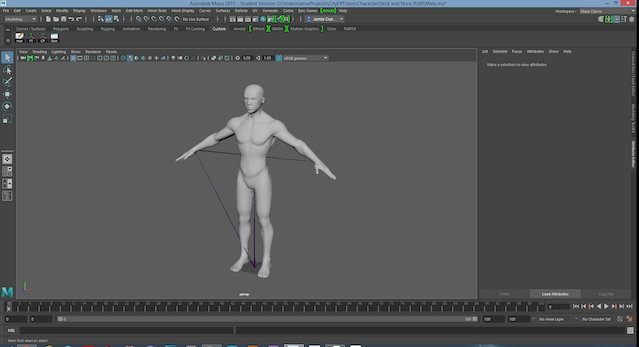 We had some odd demands about how to slice the body up so we could swap out arms and legs without splitting the mesh up - one of our groundbreaking technology attempts. It works pretty well, except that it wound up being pretty rough - basically the end result of a mesh that was swapped that way, wound up having double-faces at every fusion point. Things got messy, so it got put to the side till we had time to spare.

Then we tried to put a skeleton inside the body we’d made. 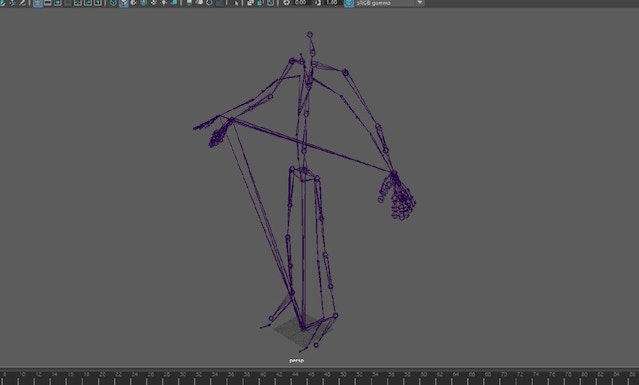 How many joints should it have? Not as simple a question as it sounds - did we want two joints in the spine or three? Four? Did we need articulated toes? Fingers? (Yes, yes, we wanted fingers.) 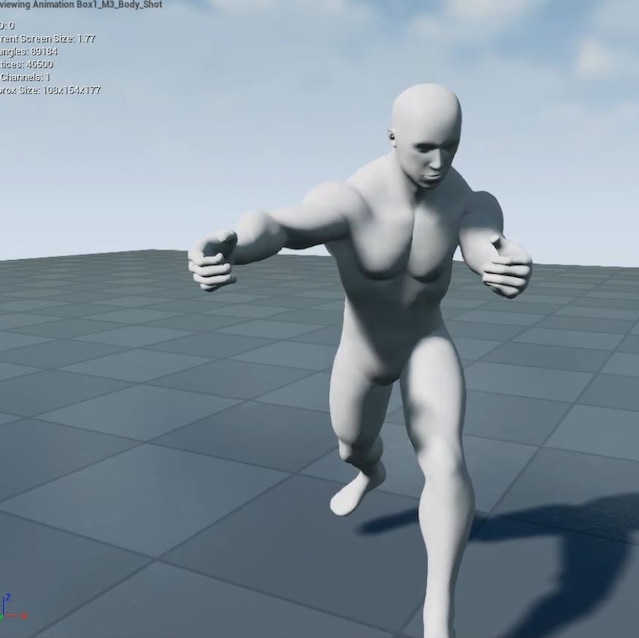 So… we made a new body. Found more problems. 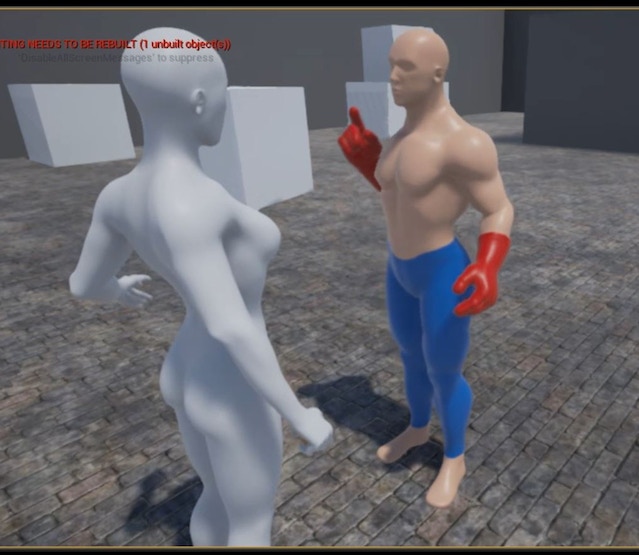 For one thing, every time we do a new body, we have to do a new map-of-the-body. It’s called a UV, because it’s a graph, and XY is used for the mesh, so the UV is proportionate to it. (Technically, XYZ and UVW.) 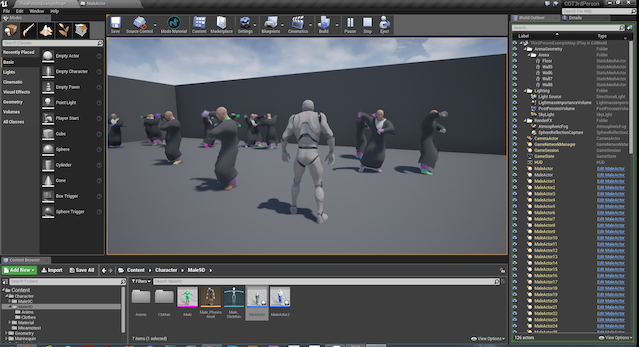 This means every time we decide to change something significantly, we had to redo the way things look - minor changes we could keep the same UV, but anything larger and you got what I can only describe as… smearing. 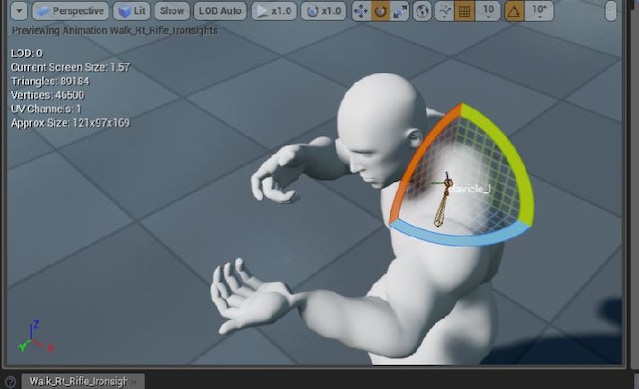 And finally, we made what we thought was our final body. Got our friend Nicolas to rig it up. Then comes weighting.

Weighting is a tricky thing. Ever see an old cartoon? Not just an old one, a super-old one. The kind where everyone moves on super-bendy arms and legs?

Do weighting wrong, and things look like that, if you’re lucky. It’s about telling the body how much can bend and which way. Do it wrong, and you get wrists that twist like a set of hot-dog links, or arms that come out from inside the body, rather than the shoulders.

But things were progressing. This is the body you saw in our old character generation video, the one that showed off the morphs. It was a little blocky - the forearm morph looked like Popeye, and the face looked kinda like a horse. But it was usable.

And then we found a way to kick it in the tail and make it look ten times better. We had problems - I’ve mentioned the elbow problem, the shoulder problem… but they’re all solvable.

And it looks darn good. 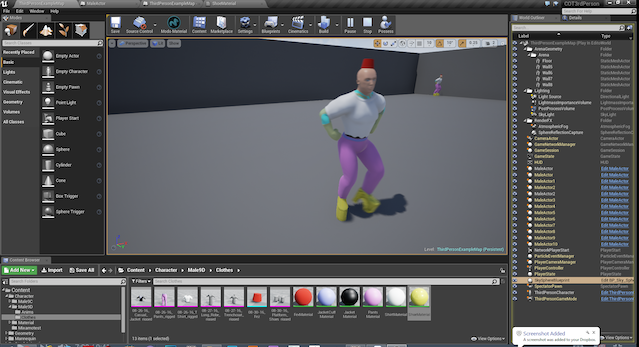 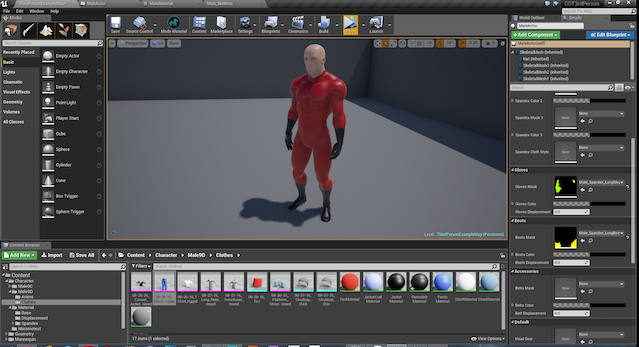 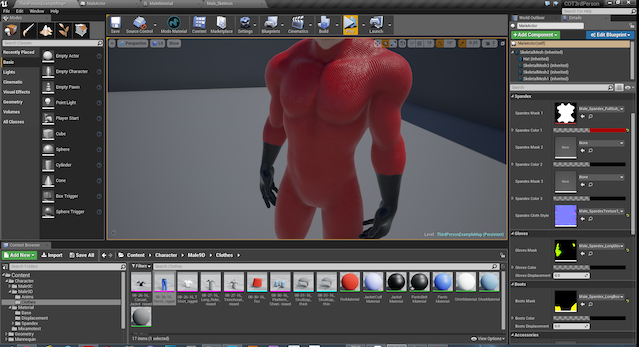 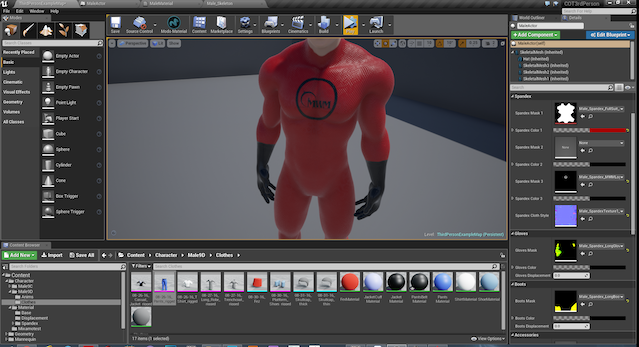 And a little bit of a face. Wait till you see what we have planned for eyes. Spidey, eat your heart out. 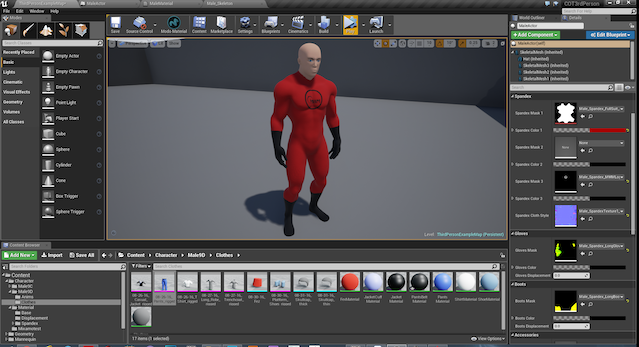 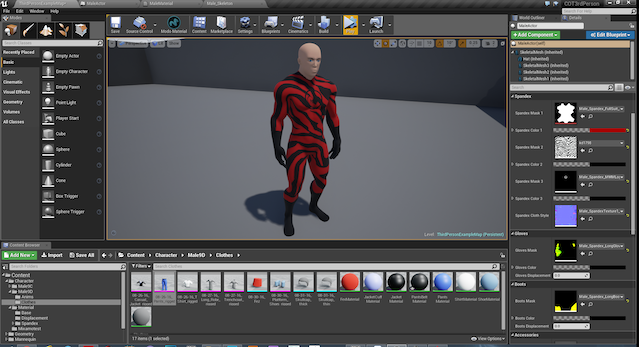 This is a prototype hair - it is not the final hair. But he does look darn good in it. 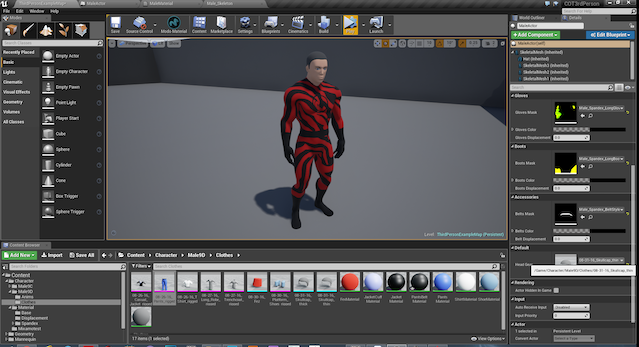 And it's no good if he can't move. ACTION! 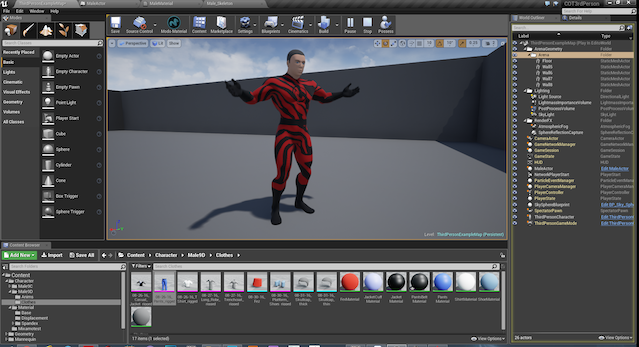 But even more than that, we’re working on clothes. Real clothes that move with you and morph with you as you apply sliders.

....It's harder than you think. Even a normal pair of shoes can go horribly wrong. 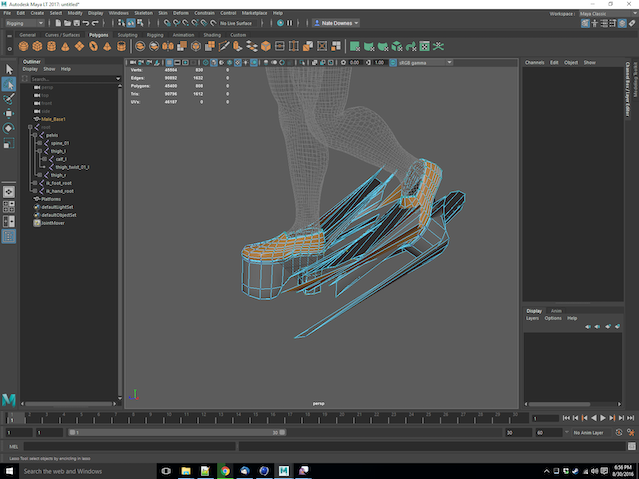 This is an animation challenge: can we make things smart enough to stand on their own feet? 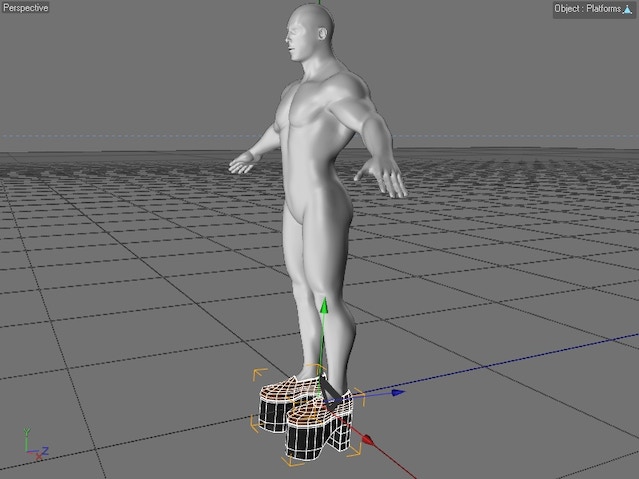 Or will they fall through the floor? 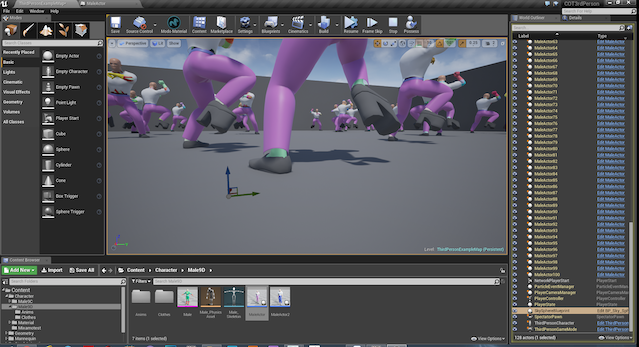 Success. More success than you think. The hair's not part of the body, and neither is the shirt. (The shirt's hem needs some work.) You can wear clothes over your costume and change the colors independently - and if people were wondering, that's how we're handling Superman's shorts - you can have them a dozen different ways - including this Borat inspired concept we're working on.

This video is hot off the devbox - it was finished at around noon today. Sorry about the lack of sound, but we figured you'd rather see it today than in a month. We want to have something better for you by then. I'm thinking capes... wait, plural?

Things are speeding up.

(And guys, if you want it to keep speeding up? Support City of Titans at our webcomic. [urlhttps://www.patreon.com/HiJinx[/url] There's a new page coming tomorrow! And an official Superhuman Citizen ID mid-month!)

Discuss this update at: http://cityoftitans.com/forum/discuss-just-seven-days-i-can-make-you-man

Thanks to Team Prototype and Nicolas at https://twitter.com/_Enter_Reality_