Landmarks, Moguls and Sites of Interest in Downtown District 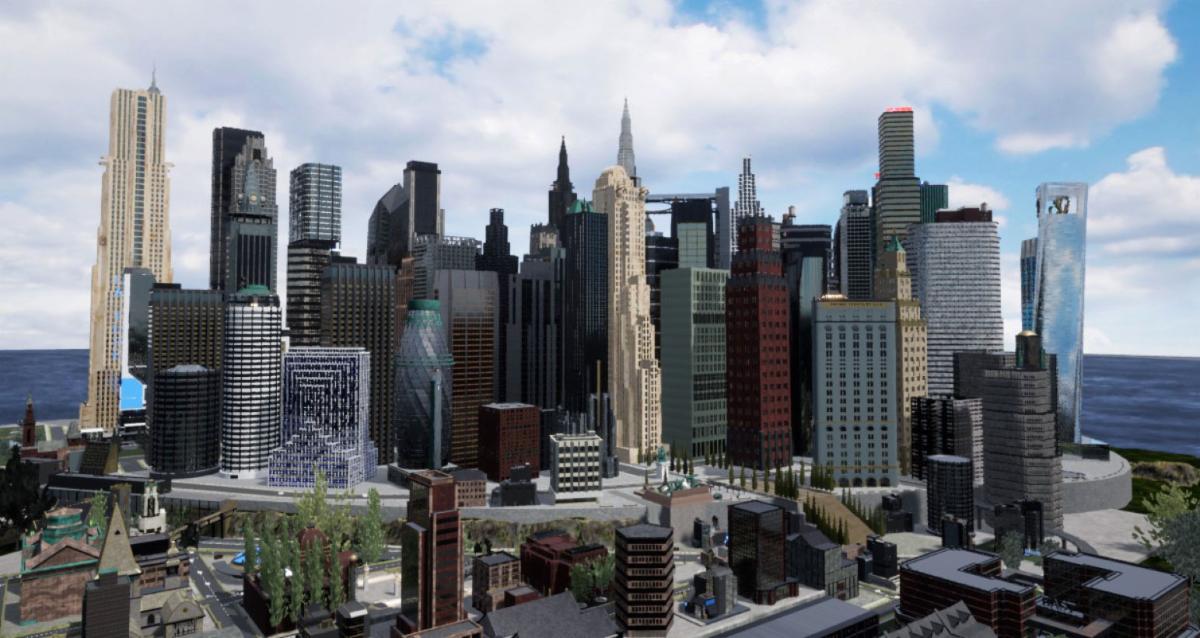 Downtown Titan City is the iconic center of town for commerce, architecture and a concrete jungle for Titans to swing, jump and fly through. With daunting heights and a mix of old and modern city character, Downtown is fascinating to explore. From its plazas, mini-parks and squares on the ground, to its sculptures, sky bridges, and aerial super bases in the sky, it's a vertical wonderland for the sights and senses. Downtown is not only stunning aesthetically - it's where some of the most exciting action happens in Titan City!

The section of Downtown seen above is just a portion of the total neighborhood, representing about a third of its total size built to-date. The light blue streets in the map below (plus a little more area around it) is the built-out area shown in these pictures. When the other two-thirds of Downtown are fully built, it will be a massive area to explore. 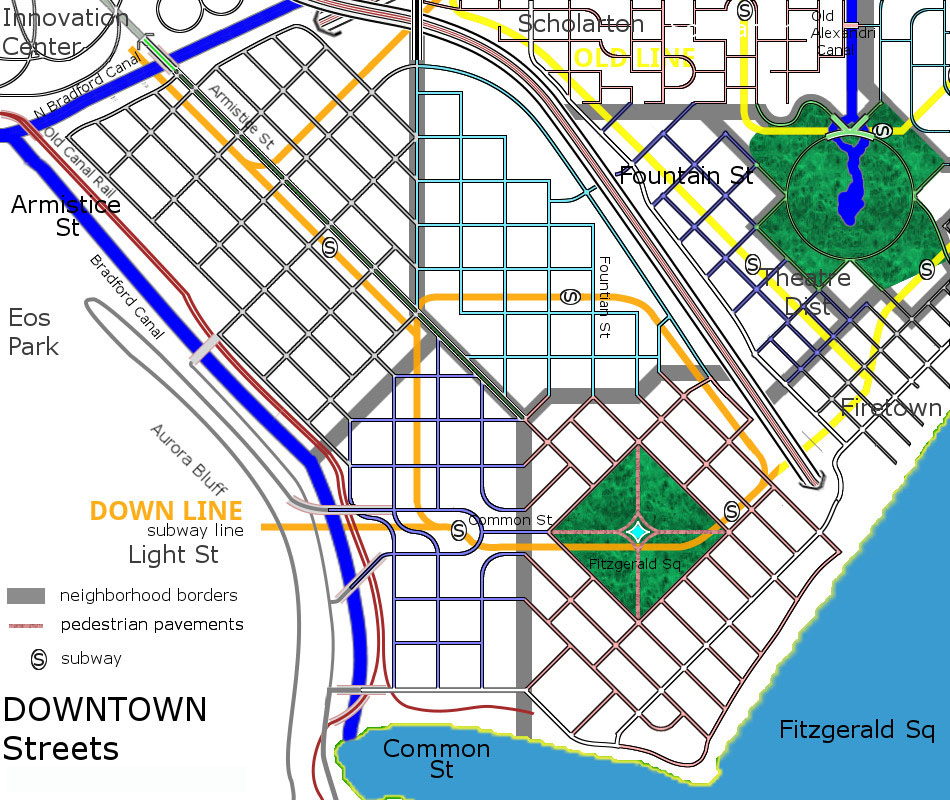 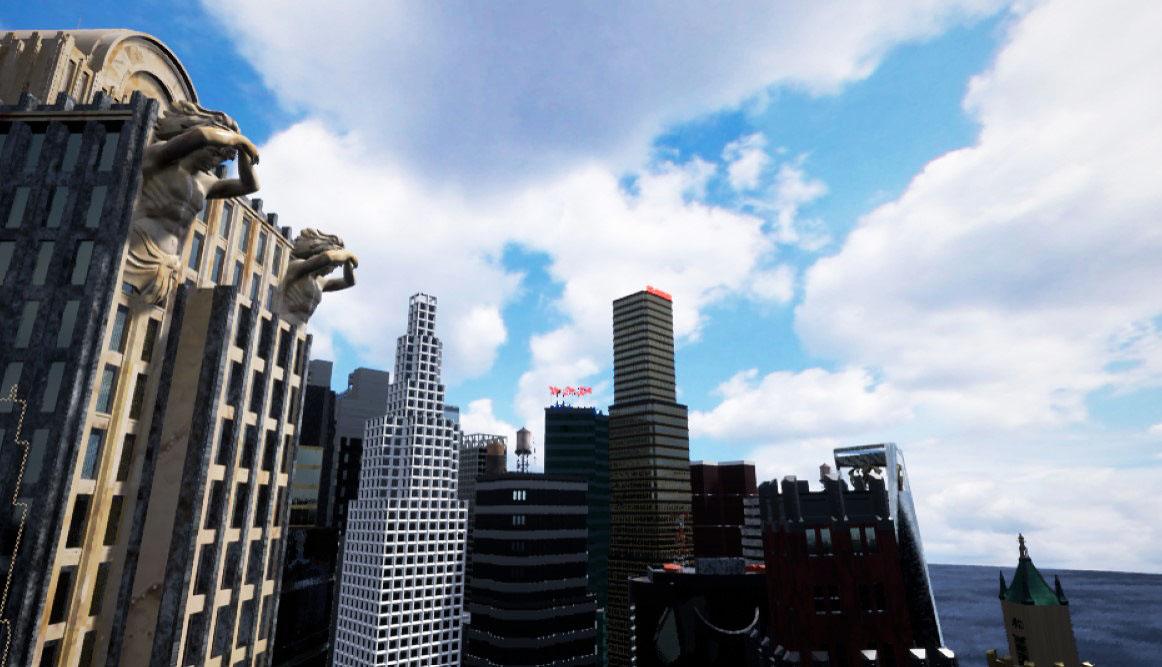 Sometimes known as "the business district," "the Skyscraper District," or "City Center," Downtown is definitely the heart of the action in Titan City. 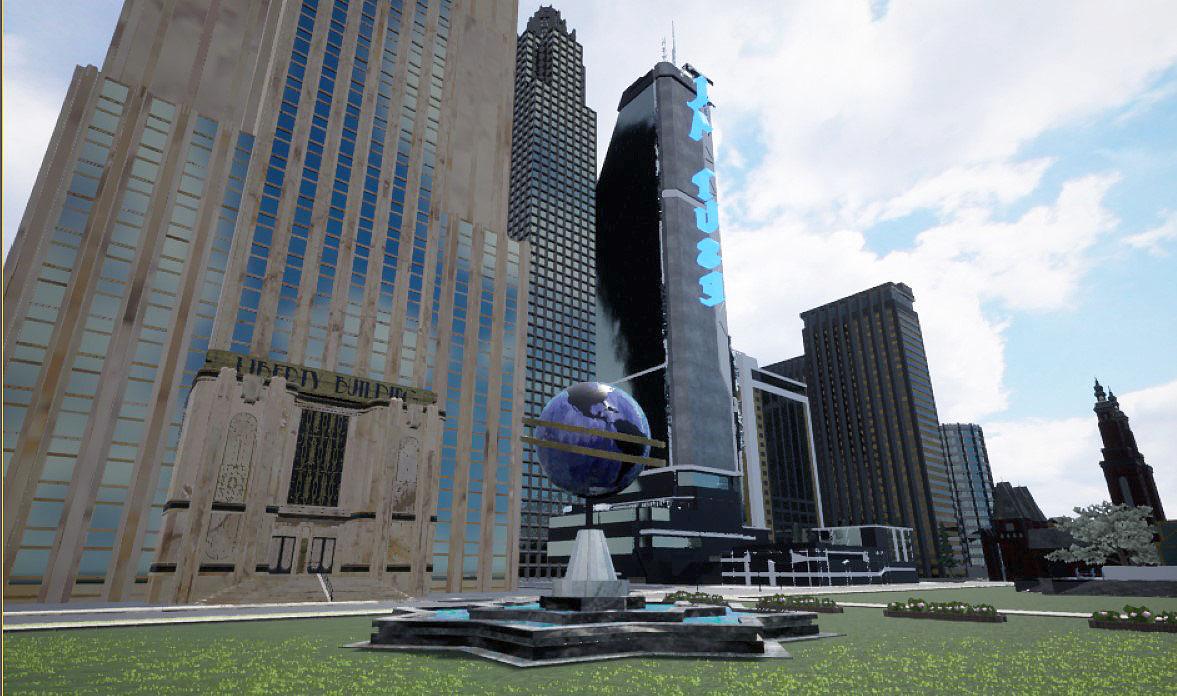 Built over the course of a century, its soaring spires and spectacular towers stand as testaments to the city’s enduring strength. Noted Titanite Chester Gilbertson once described the area:

“This is the beating heart of a city. Even as the city sleeps, the streets are alive and restless. People stride to work full of purpose, or play on sidewalk and skywalk chasing their idle pastimes. Ranks of automobiles throng the streets, and the skies are always full of birds, planes, and super women and men.” 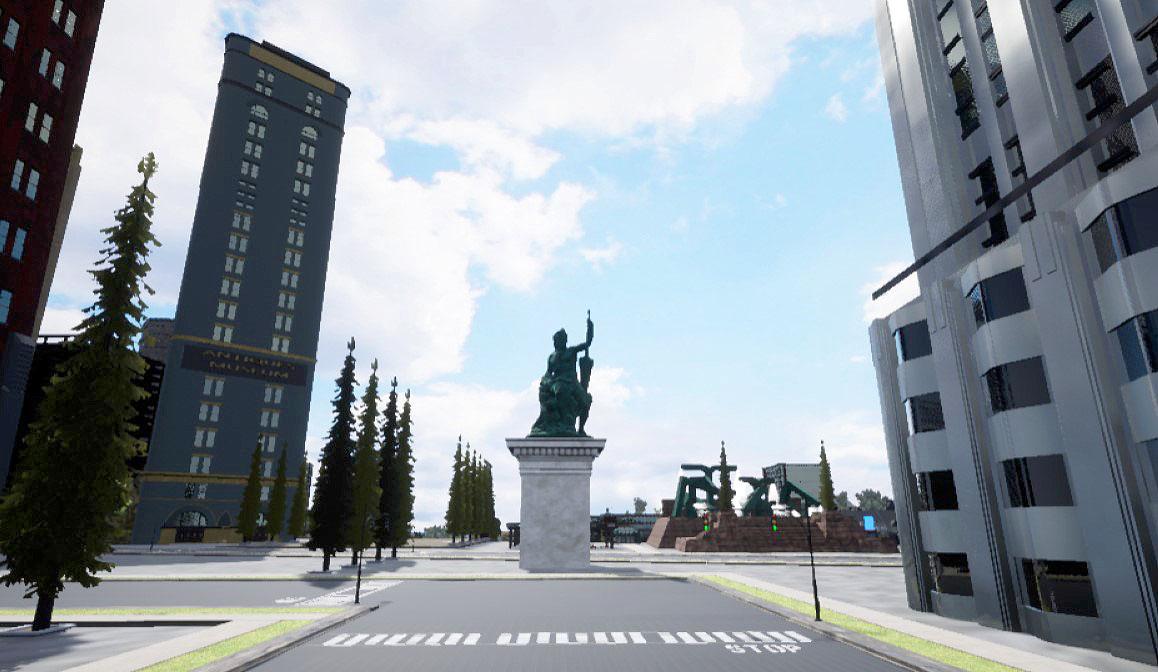 This turned out to be a blessing in disguise. City planners redrew the area’s layout, replacing the tangle of winding, narrow streets with a grid of wider thoroughfares suited to automobiles. More importantly, the demand for new construction lured visionary architects and builders from all over the world. 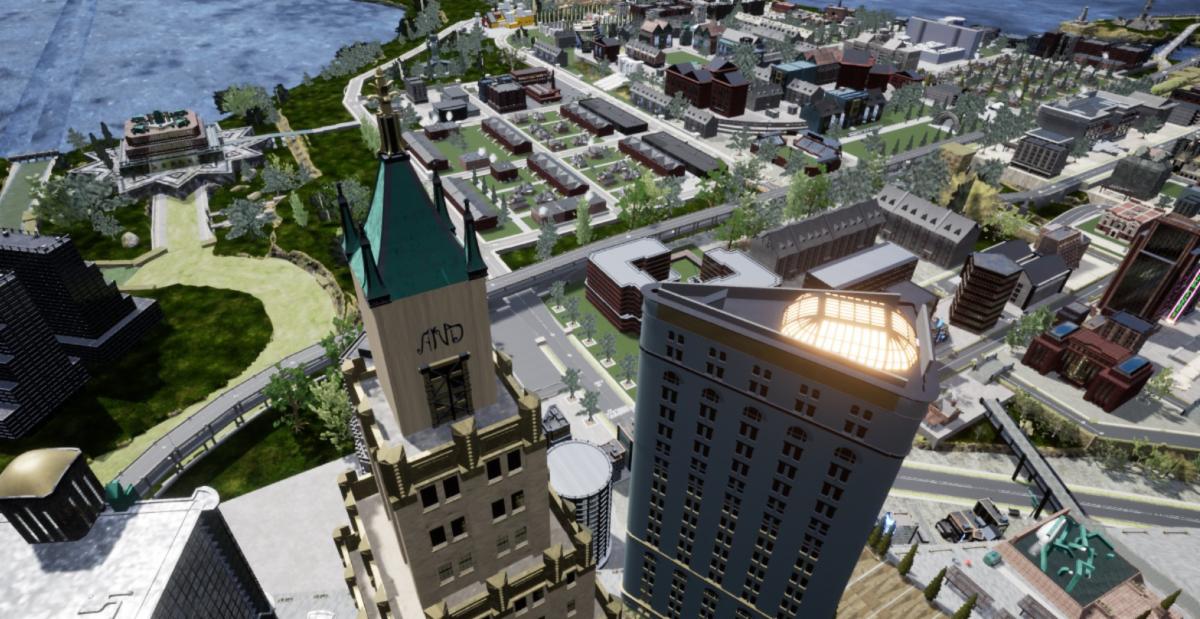 In the 1920’s and ‘30’s, its skyscrapers achieved worldwide renown. The “shining spires of Titan” became as symbolic of the city as its burgeoning hero population. Even today, no image of Titan City is more iconic than that of a hero perched on an elaborately molded skyscraper, standing watch over the city. 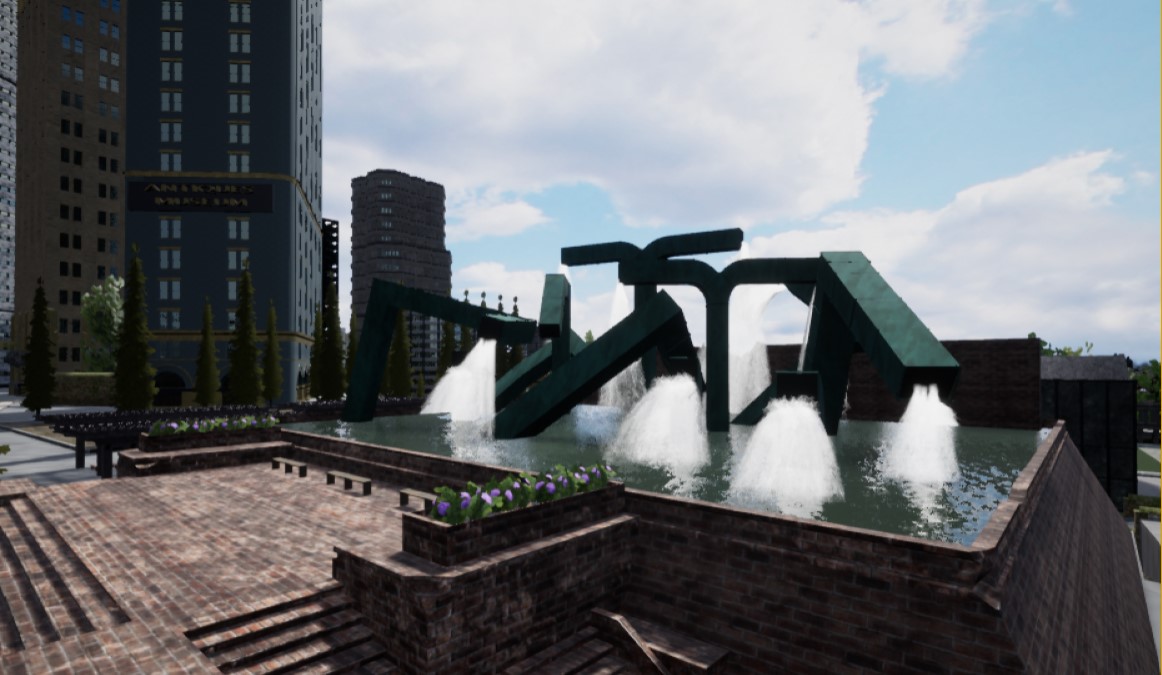 Several buildings suffered serious damages in Hurricane Atlas, and a few even collapsed. Most of them have now been replaced with Postmodern equivalents. The new construction also finally jump-started a project that had been discussed since the 1930’s: an attempt to connect skyscrapers with a network of skywalks and platforms, creating a true “vertical city.” 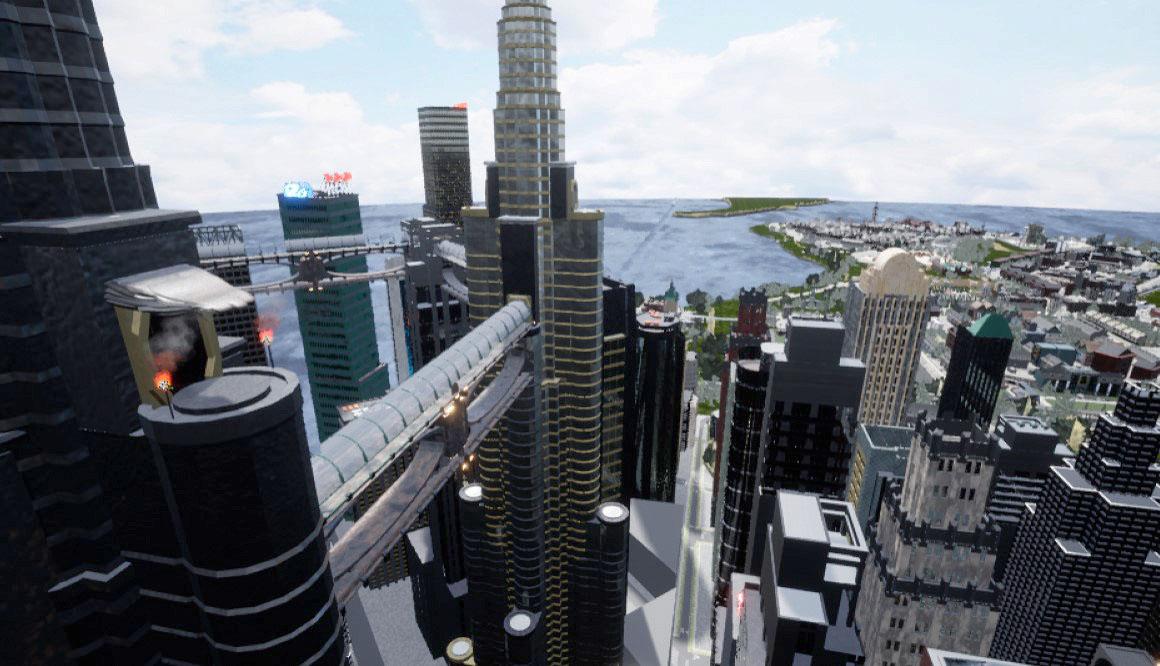 Even more surprisingly, airship traffic, gone since before World War II, has recently returned to the area, with aerial visitors ranging from blimps to more unwelcome ones like the Aether Pirates. The last decade and a half has seen a rebirth of business and tourism in downtown. 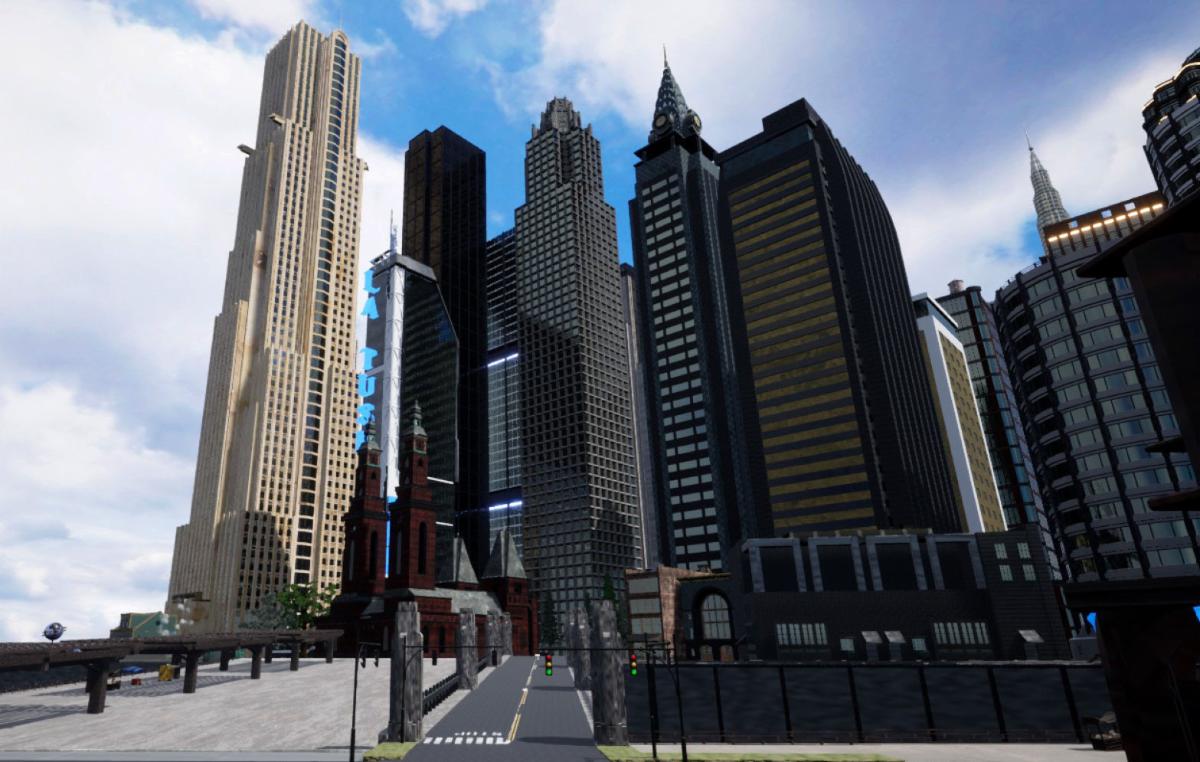 Downtown is home to a number of commonly recognized neighborhoods, including: 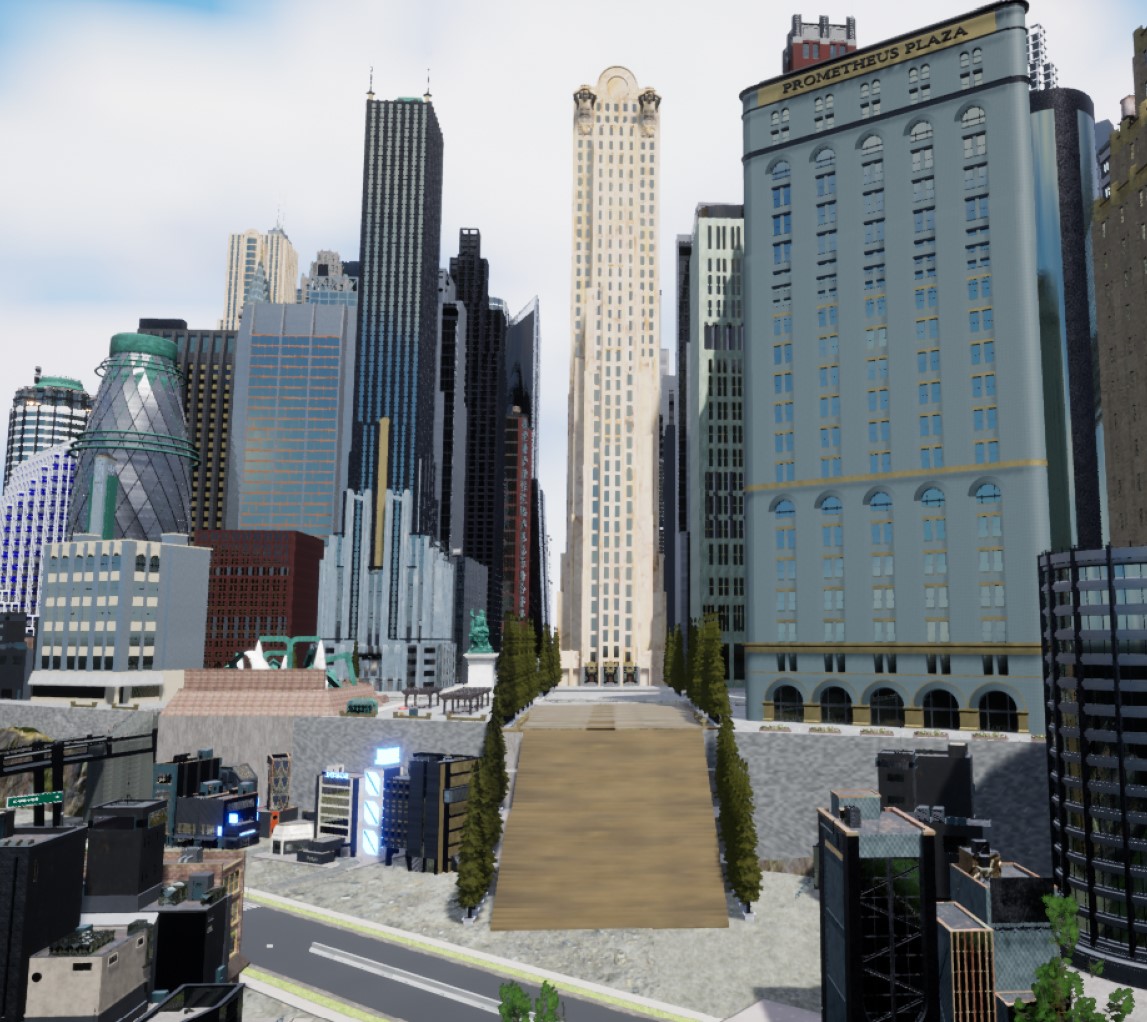 Downtown is home to a huge, wildly eclectic range of superbeings and superpowered groups. Some of the more frequently glimpsed groups include enforcers of the Black Rose, the Aether Pirates, and the ePunk Radicals. Prominent supers often seen in the area include Captain Orbit (who can be found, obviously, at the Orbit Room), the speedster Celerity, and a host of others. Nearly every prominent hero and villain in the city has fought in or at least passed through Downtown on multiple occasions.

Make sure to take some time exploring Downtown, not just running through it on the way to your next mission. There is a whole world to explore here!