Attacks in MMORPGs come in many forms: abilities, spells, skills, attacks, powers, etc. City of Titans is a superhero game so naturally they take the form of powers. You might be used to “powers” as a particular combination of particle effects (which may or may not be customizable) and a mechanical effect (damage, stun, resistance to damage, etc).

City of Titans takes a very different approach, coined Aesthetic Decoupling. Aesthetic Decoupling is exactly what it sounds like: the aesthetics - particle effects, weapons, animations and models - are decoupled from the mechanics - the damage, mez, or protection. This means that any power can have any set of particles, animations, and weapons.

The simplest option is which particle effects go with which mechanics. They come in the form of VFX packages. For example, from the Lethality ranged powerset, Rapid Burst mechanically does physical damage over time and a resistance debuff. By default, this would be bullets from a gun, but you can customize it to use arrows, firebolts, acid bubbles, magic missiles, ballistic missiles, icicles, or even baseballs!

This makes choosing a powerset much more streamlined. You pick a powerset based on what damage type, resistance, controls, or protection you want your character to have, then you can choose any VFX package to go with it. It also allows one character to have many VFX options! Say your hero normally uses energy blasts, but you want to role-play that they’ve been depowered, so now they rely on guns. Maybe your character uses guns on some enemies, but would rather use boxing-glove arrows on others. Aesthetic Decoupling allows you to have all these options on a single character.

The next most important part of power customization is the animation, especially for melee powers. For example, a character who is a well-trained hand-to-hand combatant might choose the Fighting Prowess melee powerset. Forceful Swing mechanically does physical damage to a wide melee cone, but aesthetically this could be a wide hook kick, a haymaker punch, or a series of super fast punches.

Animations for ranged powers are just as varied: from Psychic Blast, Lobotomize might be a character holding their temples before sending a blast out, tracing an arcane symbol in the air to launch a wave, or merely crossing their arms for a moment before the blast is sent.

Below is a very early demo of animation customization mechanics.

A huge part of a hero’s costume and powers might be a weapon: an invincible shield, magic hammer, claws, katanas, or a wizard’s staff. These are called Props, any item that is held by a character while they use powers. For example, a hero that wants to smash hordes of baddies with each movement would take Massive Melee, so Massive Swipe could employ a large broadsword, katana, warhammer, or bo staff (or no Prop). The same goes for ranged powers: from Illusions, Trick of Light might be performed with a wand, staff, sword, or high-tech rifle (or, again, no Prop).

Importantly, animations can also be customized for a given Prop. Using Rapid Burst again as an example: given a revolver, your Titan could shoot from the hip cowboy-style, carefully aim before taking a few shots, or toss the gun in the air before catching it and firing. Below is a very early demo of a character holding two Props and performing wide swings with a sword.

Getting into finer detail, Aesthetic Decoupling also decouples where a particle effect originates. Where a particle effect originates is called an Emanation Point. For example, a character with Force Blast may cast Focused Blast from their hands, from their eyes, from a chest jewel, from a necklace, or from a shoulder cannon. Emanation points can of course also be from a Prop: the barrel of a gun, the underbarrel of a rifle, the tip of a staff, the tip of a sword, the center of a shield, or from the ground after a warhammer has been smashed.

When City of Titans gets to pets and shoulder pets, Emanation Points can originate there too! 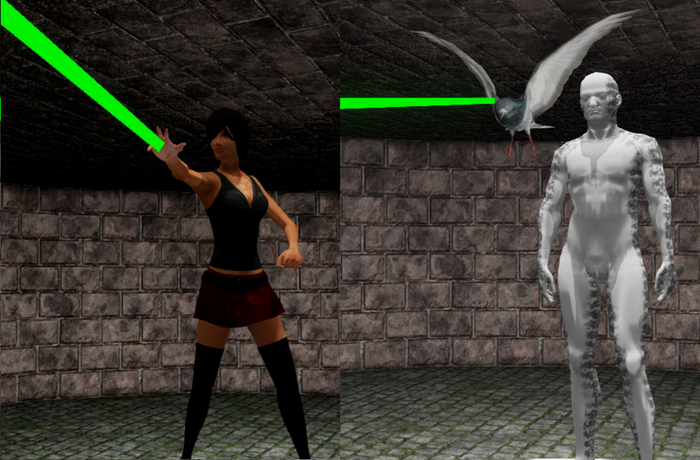