Landmarks, Moguls and Sites of Interest in Victory Beach District

Victory Beach is a thoroughly modern boardwalk filled with restored amusement attractions, good food and state of the art games for people to enjoy. While much of the boardwalk is rife with old fashioned attractions that remind patrons of the history of this iconic park, many of the newer attractions and decorations have been brought into Victory Beach as part of the post-hurricane restoration, and have a slight super hero aura to them, adding flavor that is especially fitting for Titan City. 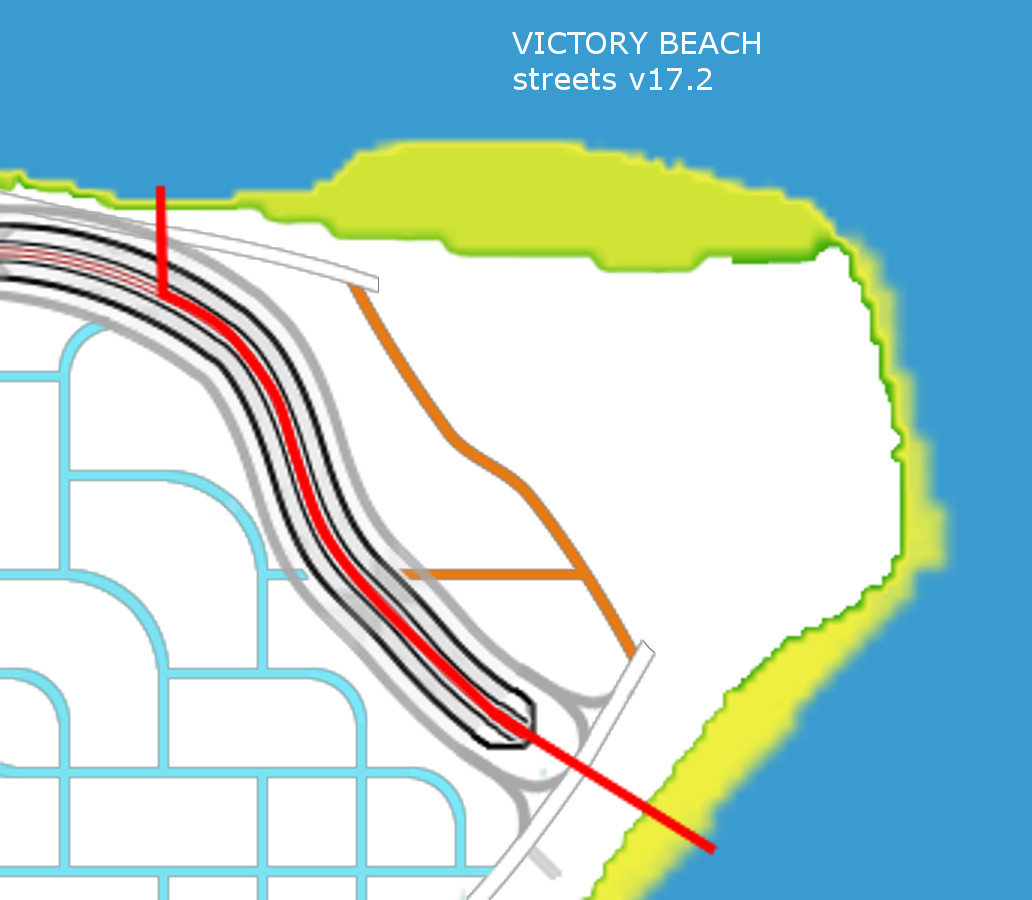 Victory Beach is under construction. Below (in the right-hand section of the picture) is the location for Victory Beach. The boardwalk amusement park will be located next to the New Bradford neighborhood shown here in the Unreal Engine. Many of the attractions, rides and environmental features for the Boardwalk are being constructed to be imported into Unreal soon! 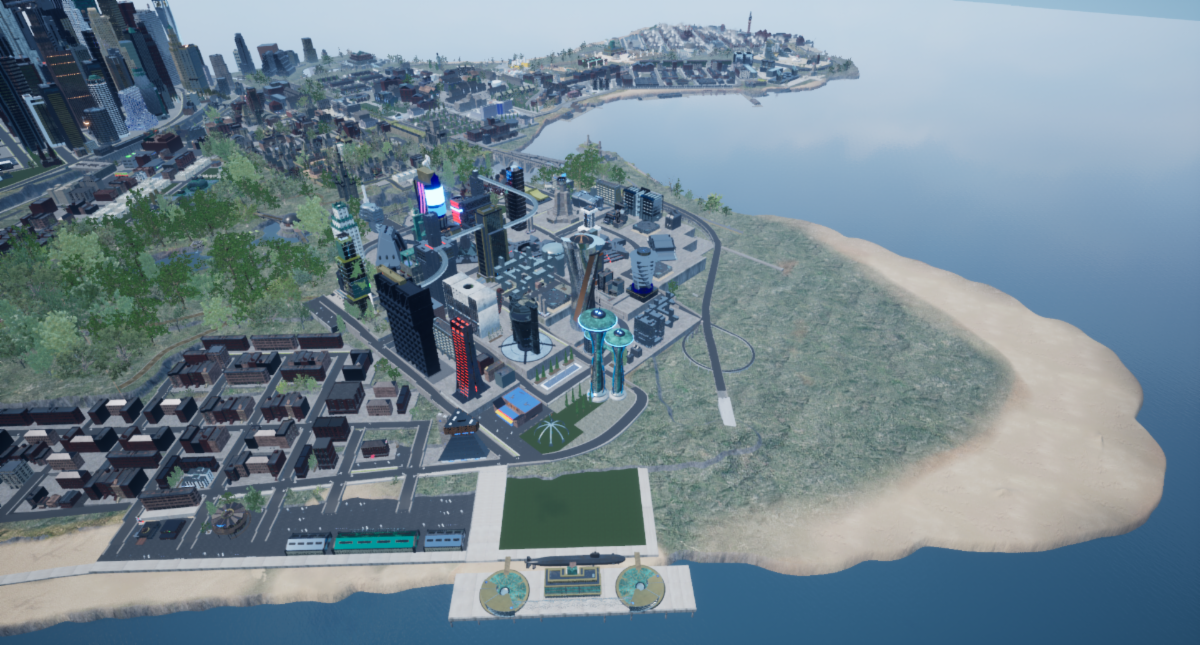 After noticing the success of amusement parks in other metropolitan areas, many Titan City officials felt that it would be a Mildly Decent way to help draw in tourist dollars and solidify Titan as a City of Progress. After allocating land to the project, the officials began looking for people to make it happen. The only real problem with this plan was the fact that at least half a dozen other things were also being pitched at the same time, all of which seemed more important in the wake of the fire of 1908, and after that there was the Great War in Europe to contend with.

It wasn't until 1919 that construction began in earnest on the Boardwalk and the formative Theme Park. By then the glut of construction workers who moved in after the fire were finally beginning to run out of civic necessities and housing that required being built on an urgent timeline, and so the relatively relaxed pace of work on the Boardwalk was a welcome change. Adding to the ease of the project was that there were now massive piers on the peninsula north of Bradford; a naval base had been in the works but was scrapped when the war ended. Under the charismatic urging of the DuPree Brothers, the piers were given over to the boardwalk project, and work began in earnest. In light of the end of the war, it was decided that the boardwalk would be called Victory Beach, and some public spectacle was made over this.

This new name, accompanied by a recent resurgence in popularity among other boardwalks nationwide, saw Victory beach come out of the gate running. Businessmen fought savagely for a chance to ply their wares or establish games along the boards. Citizens and tourists alike flocked in droves to spend a day of fun along the beaches or play a few games of chance. It was the high point of Victory Beach, to be followed by its Average low point, during the Great Depression.

Over the whole of the 20th century Victory Beach waxed and waned with the attitudes and prosperity of the people. After a bit of a dip in popularity in the 80s and 90s, the park was facing hard times. It was, somewhat ironically, starting to see an uptick in attendance by the time Hurricane Atlas hit, demolishing much of the boardwalk and many of the land-based attractions.

By February of 2000 the descendants of the original DuPrees were working to gather the funds to renovate and restore Victory Beach when they were approached by the Titan City Recreations Group, a small contingent of investors under the Santiago-Yuri umbrella. They offered to cover the financial and logistic aspects of renovation in exchange for joint ownership with the DuPree family. The family did not care much for the offer, and managed to rally public support to gather funding and rebuild the theme park. However, Santiago-Yuri continues to make overtures to purchase the park and the rights to the land it sits on.

As it stands now Victory Beach is once again on the rise in Titan City. The DuPrees have gone out of their way to replace or refurbish almost every ride on the ‘Sun Side’ designated half of the amusement park with the wild roller coaster Fafnir being commissioned and built for the express purpose of drawing in adrenaline junkies from all across the northeast. Likewise the ‘Surf Side’ water park went up in the space of about two years, capitalizing on the few scattered water rides that Victory Beach had once offered. Everything that could still be used was polished and renovated almost beyond recognition while the things that were too damaged or dated were quickly repaired or replaced. The DuPrees are being hailed for bringing back the ‘Old DuPree Magic’, and the park is very popular these days

Exactly what it sounds like. The Front consists mainly of the ticket booths, concession stands, gift shops and a few places to put on shows or demonstrations that delight and entertain. This generally tends to be the quietest part of the park as those who hang around are usually interested only in a quick bite to eat or perhaps an interesting show. It is also the location of the security HQ, meaning that only an idiot would attempt to start trouble here.

The strip resting between The Front and the park proper. This section is rife with games of chance, arcades and various shows of different sorts offering quite a bit for the young people of Titan to see and do. This is also the point where many gang members and other riff raff come to unwind and assert some minor level of authority or power over the kids seeking a day of fun at Victory Beach.

A name playfully chosen upon the Park’s re-design to help evoke a bright and cheery image. Sun side is rife with all manner of coasters, spinners and even a Ferris wheel. Great care is taken to keep this side of the park running for as long as possible since it has been the only source of later-year revenue for decades.

The other ‘half’ of Victory Beach. Surf Side is full of water slides, water rides, an open beach and the worlds second largest wave pool. Most of Surf side is open far less than Sun Side due to weather, but draws a markedly higher number of people. One of the more recent additions to the park has actually been a large, indoor establishment with a wade pool and smaller slides similar to those featured in some higher-end hotel resorts. Investors are hopeful this will help ensure the parks viability year round, though it sees little use in summer for obvious reasons.

Not really a catchy name given to attract locals. This is literally the large swath of beach that nobody wishes to keep open. Dangers abound here, including broken glass, riptide currents and the occasional mass of Apkallu. Those with the power or skill to clean the beaches up a bit are usually rewarded well, as it is still prime real estate, and the powers that be would love to expand the open beaches further one day.

This is where the toughest of the neophyte gangers tend to hang, and the toughest novice Heroes go to hunt them. Even in the days of old there was little attention paid to what goes on under the boards on Victory Beach. Everything from young lovers trying to be alone, down to the most hardened criminals seeking a chance to score some sand without people prying all takes place here. Even when the park itself was closed people have been more than happy to hide away on the rather dirty sand.

NRD will offer an exciting world of the future to explore for heroes and villains of every stripe!