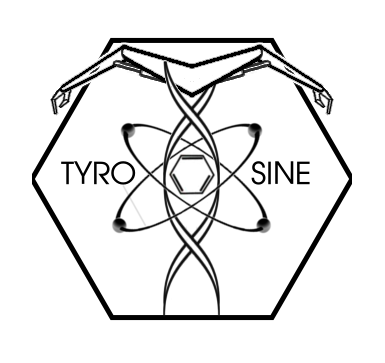 Summary: A corporation that produces a wide array of technologies, Tyrosine always has rumors swirling about them.

Legal status: Tyrosine is a legally incorporated company operating internationally. While charges are brought against the company fairly regularly, nothing ever seems to come of them.

Started in 2004 by owner Florence Gardner and her CEO and brother Winston, Tyrosine has become a titan of scientific ingenuity, but it had relatively humble beginnings. After her previous employers perished in a freak accident involving a plant monster, Florence went to her accountant brother seeking funding to begin an independent biotech research company. Winston was always the more conventional of the two siblings, but he also has a famous eye for investment opportunities, and saw a big future in some of his sister’s ideas. Out of this pairing was born Tyrosine, a company dedicated to the advancement of science for use by the public. Their first official product line was genetically modified plants for use in high-yield crops, which proved so successful that they have become a nationwide corporation.

Location: Tyrosine is headquartered in the Northeastern Research District of Titan City, in a large high-tech facility covered in advertising and sloganeering. The facility offers tours of many of its labs, where students or adults can see demonstrations of advanced science in action – all in carefully controlled conditions, of course.

Next to their headquarters, Tyrosine hosts the “Tyrosine Home of Tomorrow”. This facility seems to be entirely public-facing, and is in a very different style. A retro-futuristic building seemingly crafted from A gigantic piece of molded plastic, the building is dedicated to tours and showcasing Fine Tyrosine Products. Considered a gaudy eyesore by many, the building is nonetheless a popular stop for grade school field trips, along with the tourable portion of Tyrosine’s laboratories.

Notable Members: Winston and Florence Gardner are the main faces of Tyrosine. Florence has given us such breakthroughs as Megawater (“with all the vitamins and minerals”), Conquistador Peppers (“Peppers that will claim your tongue in the name of flavor!”) and the entire line of Mesmerism cosmetics (“they will never know what hit them”). Winston provides the business savvy that has leveraged his sister’s genius into a technological titan. While the company employs hundreds of thousands more people besides, they seldom make the news themselves.

Stated Purpose/Goals/Motives: Tyrosine is dedicated to building a better tomorrow, through SCIENCE! On the surface, they’re a fairly well respected Biotech Corporation, and it’s fairly well known that their "R&D Department" is always on the look out for the latest innovations in science. Tyrosine’s products are mostly biotechnological and chemical in nature; products like Conquistador Peppers, Megawater, cosmetics and synthetic materials are their main products. Occasionally, they will release a more "exotic" product like the Tyrosine Infinite Wardrobe (a subscription service that uses 3D Printing to craft recyclable outfits). Aside from their rare "oddball" releases, they tend to focus on ordinary, commonly used products. Hundreds of items found in Titan City have originated in a Tyrosine lab.

Exploits: Aside from their highly successful product lines and rampant marketing, Tyrosine doesn’t have a very large public footprint. While they have contributed some to city infrastructure (alongside other local tech giants such as New World Technologies), they tend not to get overly engaged in many of the extraordinary happenings in the city, tending to prefer selling to ordinary people. In all fairness, as large as the superhero population of Titan City is, ordinary people are still a larger market.

Combat: Tyrosine has a considerable fear of corporate espionage, which some would say is justified. They have a considerable force of hired security, although this is really nothing out of the norm for a large company in the Northeastern Research District. The stranger thing is the reports from people who tried to infiltrate their facilities and escaped, babbling incoherently about hideous monsters, ghosts, and robots.