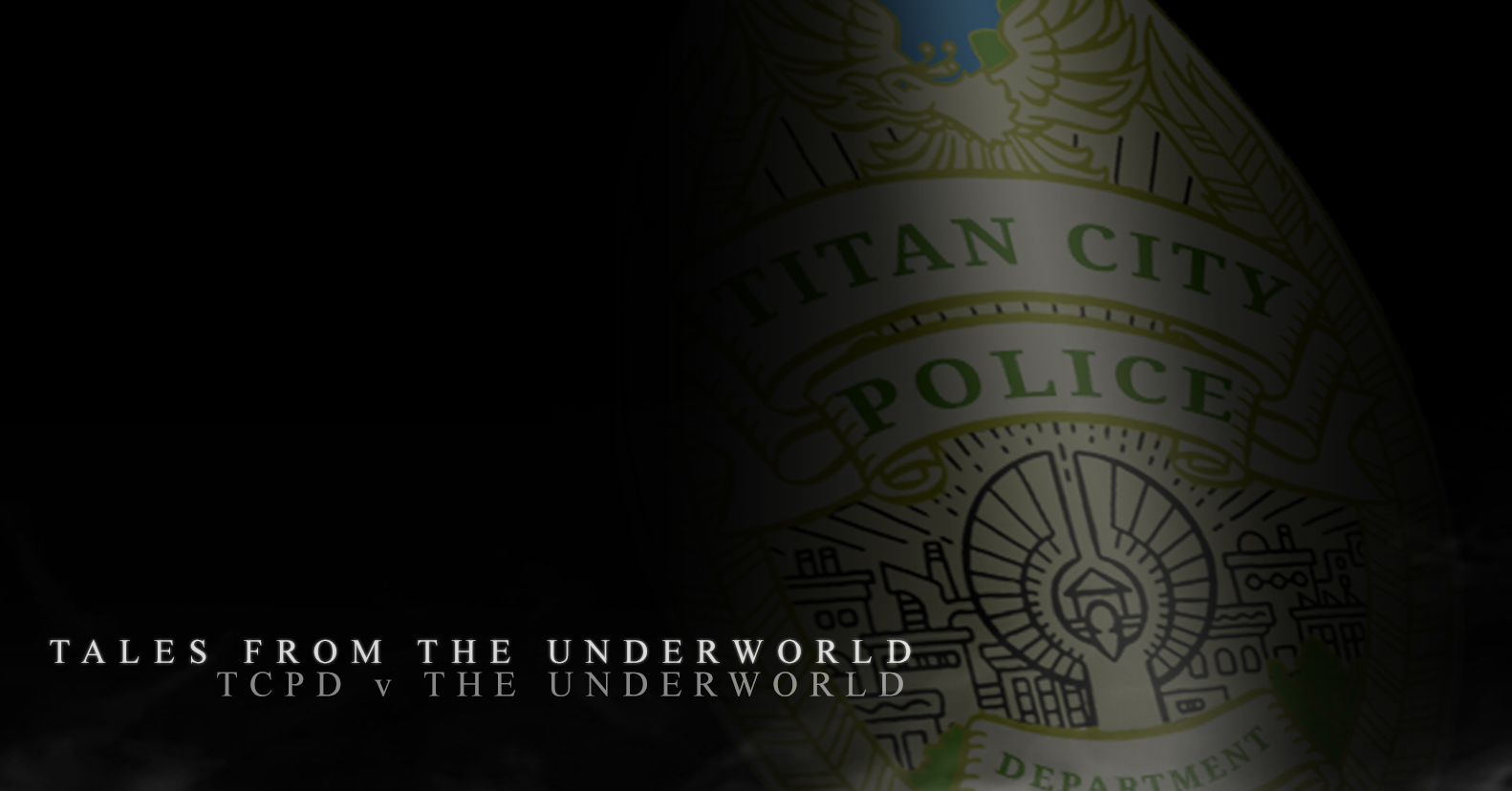 The world slowed down as Castilucci prepared to fire, as he prepared to face a bullet himself. He felt as if he exhaled for a solid minute as he prepared to squeeze the trigger, and he watched the cop do the same. He took in dozens of small details: a bead of sweat running down the woman’s forehead, her short, bitten nails, the nameplate on her uniform shirt that read “Aurelia.”

He heard a crash of glass behind him. Even as he called himself an idiot for doing it, he started to glance over his shoulder. He looked back at the woman—Aurelia—but it was too late. He heard the rasp of another pistol being drawn from a police holster, the rattle of handcuffs on a belt. The TCPD had sent backup.

Castilucci bit back a curse and raised his hands.

“Aurelia, look out!” shouted a deep voice from behind him. Before he could react, a gunshot banged in the small room.

Pain erupted just below his right shoulder. Castilucci dropped his gun. He cursed involuntarily. He felt warmth spreading through his shirt. He looked down to see a spreading, red stain on his upper sleeve. “I been shot!” He fell to his knees, more in surprise than in pain.

“What the hell!” shouted Aurelia. “Why did you do that?” She placed her gun on the dresser, cuffed Castilucci’s hands behind his back, wadded up his jacket, and pressed it against his wound. “He was surrendering! Call the paramedics, now!”

The other cop—Castilucci figured it had to be a cop—paused a moment before answering. “He was getting ready to shoot,” he said. “He would’ve killed you.”

Castilucci felt the first tingles of pain breaking through his shock. It’s just a scratch, he told himself. He shut his eyes and bit his lip, concentrating. Something about the male cop’s voice nagged at him.

“And you could’ve killed him,” Aurelia said. “This isn’t the Dark Age … what’s your name? What’re you doing here, anyway?”

“I’m your backup,” he said. “Your friend Alvarez sent me.”

She shook her head. “Get on the radio and call for medical attention, now.”

Castilucci heard the click of the man’s radio. “Shots fired at the Highpoint Corner SavPoint,” said the man. “Castilucci has energy weapons and cybernetics!” His voice assumed an edge of hysteria.

“What the—“ Aurelia dropped Castilucci’s jacket and went for her gun again, but it was too far away.

“Officer Aurelia is down! Repeat, officer down!” He dropped the radio.

Castilucci turned around. The male cop wore body armor like Aurelia’s, a ball cap, and mirrored glasses. And he was aiming his pistol at Aurelia.

If he hadn’t bothered with those shades, I might not’ve recognized him, Castilucci thought. He’d last seen the man wearing a similar, mirrored visor and an armored costume, crouched in the shadows, watching him.

Fighting the pain in his shoulder, Castilucci thrashed back. He winced as the motion tore at the wound in his shoulder. Off-balance, Arbalest fired wild, into the ceiling. An afterimage of the fireball burned green in Castilucci’s vision.

“Get ‘im, lady,” he said through gritted teeth. “He’s that super-killer, Arbalest!”

Aurelia didn’t waste words. She sprang past him and drew her baton. She brought it down on Arbalest’s hand. Castilucci heard bones crack as Arbalest dropped the gun. Arbalest punched Aurelia in the jaw, but he was too close to put much power behind the blow. Aurelia stepped closer, stomping down on his instep. Arbalest seized her and flipped her onto the bed with some kind of fancy martial arts move. Aurelia rolled out of the way of his follow-up and punched him square in the jaw.

Castilucci watched, impressed in spite of himself. He’d seen Five Dragons martial artists hop around like crazed squirrels and younger Black Rose punch through wallboard with cybernetics, but he’d never seen two trained combatants fight like this. They tried to grapple but evaded each hold. They traded blow after blow. They usually dodged, but a few strikes connected with brutal-sounding crunches.

That was intimidating enough, but the eeriest thing for Castilucci was how each fought in complete silence. He’d gone up against a half-dozen different underworld factions and more capes and black masks than he could remember in his years with the Black Rose. Every single one of them had shouted out slogans and battle cries and flourishes. Heck, he thought, even that mute super I fought back in ‘97 was flashier than this. These two were professionals. They knew this was a fight to the death and took it as seriously as it deserved.

Castilucci just wished he knew who to root for. He stayed flat on the floor, as far out of the way as he could.

Blue and red lights flashed through the darkened room’s windows. “TCPD! Francis X. Castilucci!” shouted a megaphone-amplified voice. “The building is surrounded! Come out with your hands up!” Glancing out the door past his feet, Castilucci saw two squad cars and at least half a dozen cops, all with guns drawn and pointed toward the dark room.

“Back off!” shouted a new voice, also outside. Castilucci vaguely recalled a face to match it—one of Father Omerta’s bodyguards. “He’s a traitor to the Black Rose! He belongs to us! Clear out, and we won’t hurt you!”

Castilucci peered outside, forgetting Aurelia and Arbalest for a moment. Now that he knew to look for them, he spotted at least ten picked Black Rose men in the shadows around the parking lot. He recognized them all. Every one packed cybernetically enhanced muscles and energy weapons. “Oh, nuts,” he muttered.

Arbalest shouted, “I ain’t givin’ up! Come and get me!” He scrambled for Castilucci’s gun. Aurelia wrapped her hands around his and held it away, pointed at the ceiling. Arbalest fired anyway.

“He’s shooting! Fire!” shouted one of the cops outside. Gunshots ripped through the night. Seconds later, the gangsters’ energy weapons unleashed blasts of heat and light. The window shattered. An energy blast scorched the open door black.

As Castilucci watched, the cops and Black Rose turned on each other. They took cover behind cars and benches, taking potshots at each other. A cop screamed into a radio for reinforcements. A wild energy beam struck a car’s gas tank, setting it ablaze with a whoosh of flames. Two SWAT troopers struggled to pin a superstrong gangster’s arms. He flung them aside. He took a shot to the chest and crumpled, dripping blood and some kind of super-science goop. The lot had become a war zone.

Arbalest and the cop, still struggling to turn the gun on each other, threw themselves to the floor alongside Castilucci. Arbalest kicked Aurelia away, tore the gun from her grip, and drew a bead on her. Without even thinking, Castilucci rolled against him, throwing off his aim. The gunshot echoed loudly in the room, even over the firefight outside. Aurelia collapsed.

Castilucci kicked the villain in the back of the knee before he could move. Arbalest sprawled to the floor. Castilucci kicked him again, then again, smashing his head against the solid wood veneer of the dresser. He kept kicking until blood started flowing from Arbalest’s scalp.

“Jeez,” he panted. Gunshots and beam blasts still banged and roared outside. Arbalest’s chest still heaved, but Castilucci had neither the time nor the raw power he needed to take care of the villain permanently. He just hoped he didn’t wake up.

Castilucci crawled over to her. He winced. He had been shot enough times over the years to realize his own wound was little more than a painful, bloody scratch, but Aurelia’s was much, much worse. She’d been hit in the upper chest. The wound looked just barely high enough to miss the vital organs, but he couldn’t be sure.

“Give yourself up, and they’ll …” She slumped on her back and shut her eyes.

“They’ll fill me full of holes, is what they’ll do.” He gritted his teeth against the pain of his own wound. “Either your people or mine. They think I started that fight out there. Now,” he said, “unlock these cuffs, and I’ll get going.”

“And—“ she gasped for breath—“and get hunted down for shooting cops, or worse … your own people.”

Castilucci frowned. She was right. He needed to escape, especially if the Black Rose won the battle outside. But he also needed to be able to clear his name, and for that, he needed this woman. Alive.

“No,” she said woozily. “Not unless you do something for me …”

He glared at her, then glanced out the door. The Black Rose had cornered the remaining TCPD officers. They could be storming the motel room any minute. “Oh, for crying out loud,” he said. “Fine. What’s your price?”

She opened her eyes and stared at him, hard and intense. To his surprise, Castilucci flinched away from that steady gaze. “You have … connections,” she said. “You find Topaz for me. He’s … the key to this whole …” Her eyes rolled back, and she passed out.

Castilucci finally spotted the handcuff key on her belt. With some wriggling, he unlocked it. He scrambled to his hands and knees. For a moment, he was tempted to take his chances with letting the sole witness to his innocence here die.

But she’d mentioned Topaz, the cape who’d supposedly killed that Detective Aragon. It always came back to that murder in Ironport. Find the killer there, Castilucci thought, and maybe you can get your life back. To do that, you need her.

“You owe me for this big time, lady,” he said. He hefted her over his uninjured shoulder. He bit down on a yelp of pain. She was more solid than she looked, and he must’ve been more injured than he’d thought.

As he stumbled made for the open window Arbalest had used to slip in the back, he pondered his next move. Aurelia needed medical attention, but he couldn’t risk a hospital. And his regular underworld haunts were out of the question, with the Black Rose and its allies hunting for him. He had to go to ground, somewhere he could get healing, somewhere no one would notice him or expect him in a million years.

Next time: Tea and Sorcery!

And don't forget we have a webcomic, updated twice monthly.