Every so often, we begin to put things together. You’ve seen parts here and there, in passing, but today, we’re putting a lot of it together for the first time.

A secret data drop, a covert rendezvous in an underground parking garage, called into the police chiefs office, a hidden tip in a classified ad, an overheard comment, a stolen purse - a call to action comes in many ways and forms.

What follows is the heart and soul of the game.

It still needs a little refinement here and there - we wanted one bad guy to run off into the distance after you gave him a right hook and the boss fight isn’t there yet, and the UI is still in the prototype stage. 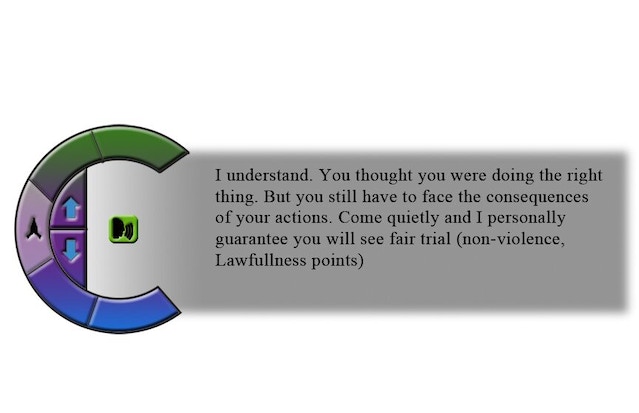 Mockup of dialogue choice UI stage 2, not yet implemented

But we’ve got our missions together. You can now go and save the day. Or ruin it. Your call, your choice.

And I do mean your choice, because we’ve gone further than any game has in creating options for you. We can write missions that wind up leading you on totally different paths - even leading to different mission maps entirely, depending on your choices.

There’s a lot of odd little elements we’ve worked in here that you might not have noticed. Animations galore - the NPCs are actually reacting to what you choose to say. Speech Balloons should be in there, but we just started integrating them with the chat system, so what you say bubbles as well as the NPC chatter. The guards and the undercover agent should both call you over, but it’s not working right now. Annoying, but sometimes you have to move ahead with what you have. And, of course, transitioning from the game world to the mission map while keeping on the same quest - so important to make the game live, but surprisingly hard to do without everything shutting off and resetting. 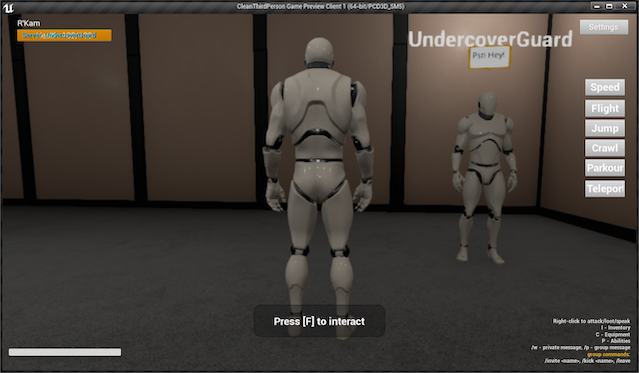 There’s things you can’t have seen, too. For example, every single part of that mission is run off a single spreadsheet that we just import into the game. 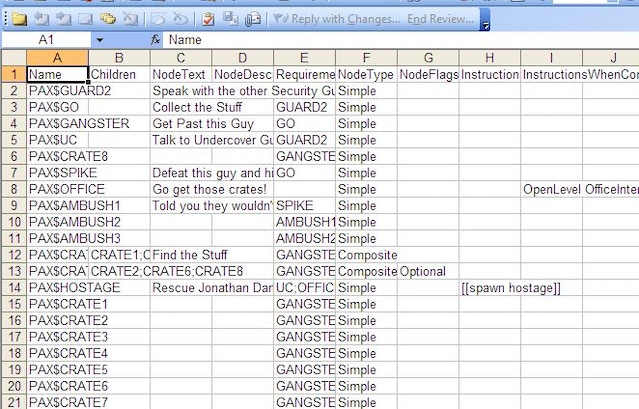 Write a new mission? Import a new spreadsheet. It’ll pick the map, set up the NPCs, and tell them how to behave. We’re working on dynamic maps as well, but they’re not working yet. Imagine it. Every mission map different, not the same map time and time again.

Another thing we’re thinking of adding is expanding objectives. Sure, nobody likes having to get a partner to have two people shut down a bomb at once - but if you’re on a team of 8, what if that kind of objective will appear naturally - and vanish if you’re solo? There’s a lot of things we can do in the future. But this is a good start.

Another thing you couldn’t tell is how that gangster at the door is instanced and phased - he only appears to you while you have the mission, and if two people have the mission, they see different gangsters - so Captain Trouble can beat him up and Sister Danger can talk right on past him without conflicting with each other.

This is all preparation for our player-facing mission writing tool. All we need is to make something that can spit out spreadsheets. Technically, .csv (Comma Separated Value) files, which are even easier. Save ‘em. Load ‘em. Trade ‘em with your friends!

There’s more, though. You’ve seen our building efforts over time. This is the first experiment with our Street Builder and Building Builder - you’ll notice every one of those buildings was slightly different, and those streets were laid out perfectly. They’re both made with our automatic tools. We set rules up, and hit the trigger, and we’re good to go. You might even have noticed they have insides, if you looked through the windows. Not great ones, not yet, but they’re coming.

We’re shifting focus back towards the costume creator now, but today, I can say that City of Titans has gameplay.

Tomorrow’s getting brighter, day by day.

Discuss this update at: http://cityoftitans.com/forum/discuss-should-you-choose-accept-it

Thanks to Team Prototype!