Are you ready for pages of pulse-pounding action? Heroics! Mockery! Aggressive Doughnut Eating! I sure as heck hope you are!

Introducing Missing Worlds Media Publishing! It’s for comics, webcomics, pulp stories, fanfic, fan art, promotion of cosplay and more! Right now we’re starting small, but we intend for it to grow to be a place for all of us to share our art, whatever form it takes.

(You may have questions as you read this. Check the FAQ at the bottom. If you just want to skip to the Patreon, it's right here: https://www.patreon.com/HiJinx) 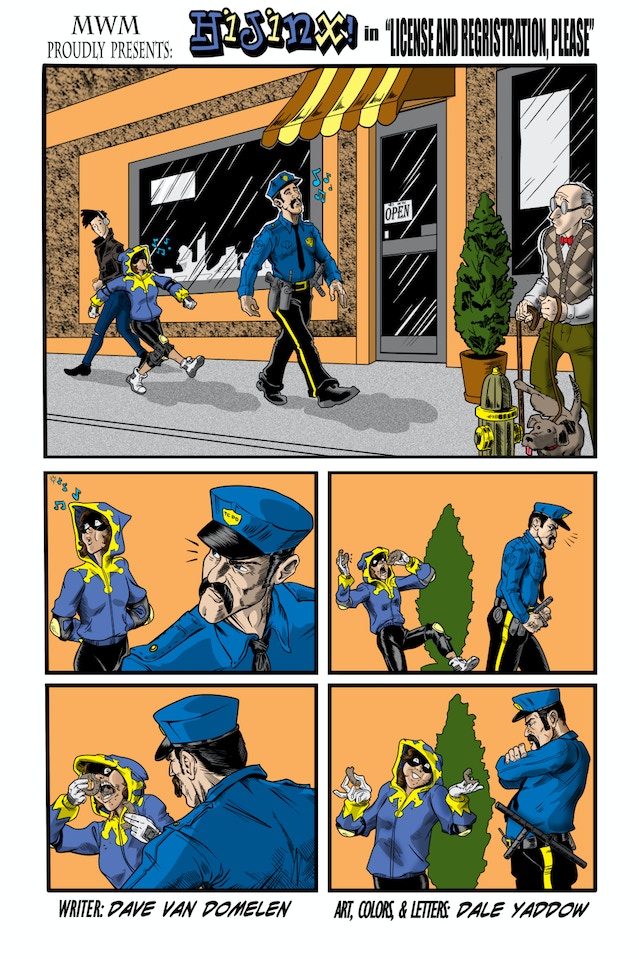 Our first project for MWM Publishing is Hijinx: Bad Ideas, Good Intentions. It’s the story of a teenager with great power and… honestly no sense of responsibility. She’s out to explore the city and see what she can do to make life more interesting for herself and for others.

We’re using Patreon to put it up, because, firstly, every page costs us a bit of money - our artist and writer are both professionals, because we believe in doing quality work, and they need to be paid. (And this is why they’re available for this - they’re not volunteers on the comic, but they believe in the project.)

Secondly, we’re going to use this to fund the project. We’re still doing okay, we’ve still got a lot of the kickstarter money, but the time to start a second funding stream is when you still have cash. Waiting till you’re broke and in trouble is just a great way to ask for trouble! (Where’s the second KS? Where’s the costume creator? Check the FAQ!)

Patreon’s a pretty simple site, you like a project, you say ‘I’ll give you a buck or two a month’ and you get special stuff from them. A lot of webcomics do it, they put the main comic up and have special bonus comics for Patrons.

Hijinx is the first of three titles we have planned, and seriously, I just love the character. The first sketch Dale did was perfect. You don’t get that often, and when you do, you grab it.

Dale (BlackGold) Yaddow is our artist and Tom (Kid Dynamo) Stillwell is our writer - and I’m going to let them talk for a bit. Dale?

Even from the initial concept, to the current interpretation, she’s been a handful, and there are times I feel like Hijinx drags me along kicking and screaming on whatever her latest misadventure is. When I was first approached to help bring this character to life, my mind immediately ran to when I was a kid her age, and to my childhood best friend, who bears more than a few intentional similarities. Being able to draw on real life experience breathed something unique into her. When my friend and I were younger, we were the outsiders. That’s really where I started with Hijinx. I couldn’t see her exactly fitting in which was, in contrast, a perfect fit for the character. All good heroes start with that person on the outside, looking in after all. If you were to ask me what my favorite part of drawing Hijinx is the answer is easily her expressions. She casually straddles the border from cartoony to serious and somehow, it always just works. She lends herself easily to both comedy and combat, and that results in nothing less than a fun and entertaining character to illustrate.

I look forward to witnessing how this character grows as a Hero(?) and seeing how far working on her misadventures pushes me as an artist. In time, as we explore Titan City and Hijinx’s place in it, I’m sure we will cross paths with some of the other heroes that populate the game world that serves as her home--which I find very exciting as well. And while Hijinx may not be Titan City’s “premier” superhero. She is most definitely MY premier Titan City hero. I hope you enjoy Hijinx as much as I do.

Hey guys, Tom Stillwell here. You may know me from my comics Honor Brigade, Toy Boy, Underneath or the upcoming Fangirl. What you probably don’t know is that I’ve been part of the composition team for a while now working to create mission and backstory content for City of Titans. Once the game is live you’ll be running around in missions that I wrote and interacting with characters, landmarks and brands that I helped create. Suffice to say, I’m well versed in the lore of Titan City.

While doing all that writing was a lot of fun, writing comics is my passion. Marrying the lore of CoT and a comic is a no brainer and something I’m really excited to be part of. Hijinx is CoT at its core...someone gifted with powers deciding what their path will be. Now imagine you’re a teenage girl faced with that decision in a city where good and evil battle on a daily basis. Hijinx is going to be a fun ride.

Dale and I really love the character and we want to translate that love to the page for you to enjoy. We can’t wait for you to see what we’ve come up with!

There’s more on the Patreon page! (Just click on the picture below) 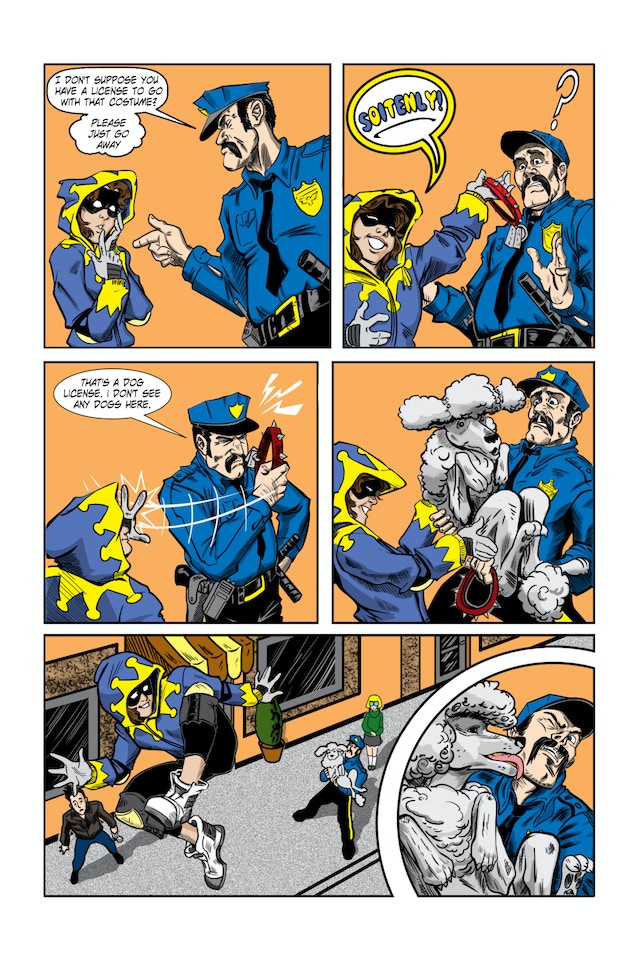 EXCELSIOR! (is the motto of New York State. It means Ever Upwards. It sounds pretty good, too.)

Sneak peek behind the scenes - a body at rest can not be stopped, but these bodies are in motion! 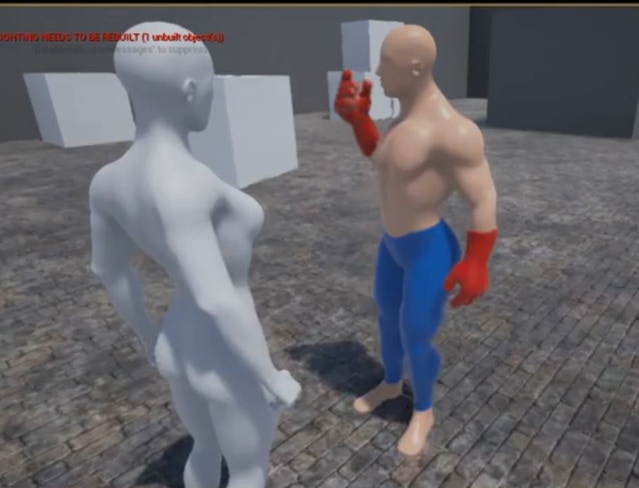 Coming. I was hoping we’d have something solid to show off this week, but we had a skin weighting issue - basically, when the arm bent, it had three elbows and it looked like a tube of rocks. We’re getting close to where we can show it off. You’ve seen samples in the last two updates of our very rapid improvement. That screenshot above looks good, but the back and shoulders are off. (Yes, he is wearing gloves, the fingers are not naturally that large.)

We’ve finally just about got it perfect. Including something new for female characters no other game has done. Now we need to make it look good.

2: What about the second kickstarter! You promised us the chance to purchase more (geocacher badges/Mogul buildings!)

We’ve spent a long time thinking about this. We’re going to run a second chance, slacker backer funding run, with all of the non-unique items from the kickstarter, as well as replacements for the unique items (and a KS package with the replacements so you can just get that), when we’re ready for Alpha. When we’re sure we’ve met our commitments for Moguls and for Geocachers. We’re not going to fall prey to continuing to promise things we haven’t done yet.

In the interest of giving you guys the best experience possible, we’ve been waiting until the building-builder is done to move forward with the moguls, geocachers, and other digital rewards. We know what you want, and we’re going to do our best to give it to you. The problem with building a game like this is that you build the tools along with the game. If you look back, you will see how our buildings have improved dramatically in the last six months. (The 4th of July video features some of our first-gen buildings at the docks. They look very bad compared to everything else, even with the awnings. Our latest generation buildings can be seen in screenshots in the same update.) We’ve also been working on a mass-emailer. We’ve had a problem where a percentage of any mass-mail we send goes to people’s spam folders, and we’re trying to get past that. Our last mass-email seemed to work pretty well. Expect more soon.

4: These guys should be working on concept art for the game! Why are they wasting time on a comic?

Well, these guys couldn’t work on the game - they’re very good, but they needed money to make art. They believe in us - and they’re not charging us full price, goodness knows - but each page of Hijinx does cost a considerable amount of money. That’s why we can’t just go ‘every week, two pages’ until we spike the numbers in the Patreon to a point where we can afford to pay for that many pages. Tom is contributing to the game, but when it comes to the comic, he deserves to be paid for what he does. It’s his day job, after all.

5: Where’s your webcomic site? I don’t like how Patreon puts the pages up!

I want to give Hijinx to everyone for free, and we’re probably going to start posting pages an arc or two behind as we proceed along. But, well, we can certainly use the money, and we’d dearly like it if you supported Hijinx and City of Titans. If Hijinx is successful, we’ll put together a website.

6: Are you running out of money? Why are you asking for more, we gave you lots!

No, we’re doing okay, we still have a decent chunk of cash, but that’s the time to start trying to earn more, before you get desperately low. We want to maintain some cash reserves, in case of disaster, and we want to upgrade and replace some software, hire some extra graphic artists (more costumes!) and so on, and so on.

7: Why should we give you money, there’s no game yet?

We hope you enjoy the comic, and hope you feel it is worth your monthly patron amount, standing on its own two feet, regardless of its connection to the City.

A MMO is a complex thing - and we’ve shown you a lot of the moving parts in the last few months, from AI to combat to an integrated world environment to full worldwide multiplayer chat and interaction to missions and instanced zones. We’re improving them, now we’ve learned lessons from the prototypes, and beginning to work on integration.

The comic and the game together are just one part of the world of City of Titans. We’ve got a big future ahead of us, and we’re all pushing together to reach it. Epic Games continues to amaze us, every month, and every month we get more done. Right now, we’re shoulders deep in building a new DB server from scratch, and this one’s going to take us to Alpha… and beyond!

Thanks to MWM Publishing!