This is Warcabbit coming at you, straight out of Game Tech. It’s one of the hats I wear at City of Titans, and it’s one of the ones I’m proudest to wear.

I’m lucky. I have two guys who are smarter than I am working with me. One’s got a PhD in Industrial Engineering (Complex Systems) and the other’s got a PhD in Physics (Education).

And, every so often, I manage to contribute an idea that they haven’t thought of yet. 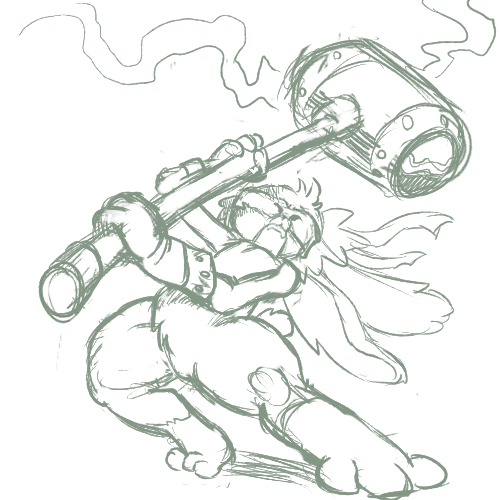 It makes me feel METAL!

Now, when you get down to it, there’s not much _to_ Game Tech when it’s done. If I were to say, “Roll a D20, add some numbers, compare to a target.” you’d know it’s Dungeons and Dragons, and the fact that there’s not _that_ much more to it is what makes it work. Getting there is a lot more hassle. We have the Function and the Lens, and both of those are critically important to what makes the game work. And we’ll tell you about them both… a lot closer to Alpha. (Whoever winds up making the next generation of Mids is going to need to know all about it. We’ll help, if we don’t do it ourselves.)

Right now, I’m going to tell you about some of that ‘add some numbers’ business. Take everything I say here as something less than the final truth. We’ve been working on this a while, and we know the system as a whole will work, but we need to do some play testing on the exact numbers. Any specific item may change a bit before we’re done.

Now, I’m a gamer, and I’ve been gaming long enough that I thought pong machines were a really neat idea. (I still think digital wrist-watches are a really neat idea.) I’ve been playing Dungeons and Dragons and Marvel Super Heroes and DC Heroes by Mayfair and Champions and Superworld and Villains and Vigilantes and Gurps Supers and Mutants and Masterminds. And a thousand other games, other genres, and other styles. (Superhero League of Hoboken, anyone?)

When it comes down to superheroes, I've learned a few things. Number one: It feels best, to me, when the hero is the character you develop, the powers you assign, and the style you choose. Giving a “+6 To Punching Glove” is just wrong. But if you happen to have a Punch attack, giving it 4D6, and NND for a Chi Punch? That feels right.

I have limits on what I can do, on how good I am at balancing, and at how much experience I have, so I can’t promise you custom powers - yet - but there are things I can do to make the game feel more like what you want. One of them is learning lessons from the past. Final Fantasy VII was interesting. It was a step towards a gearless game. It mattered as much what you put into your gear as what your gear was, and you could choose. You could choose thunder, or fire, or water…

So let’s go with that. Your power exists, but how much of what it does, is decided by the things you put in it, like something from SW:TOR.

So! Your power is defined. For now, let’s say it’s an Energy Blast! Single target, decent range, good amount of power to it. It…. oh, let’s say it’s an Electrical Blast, which leaves you weakened and slowed. Seriously, I’ve been tazed and it just left me flopping on the ground not really wanting to move for a bit. (And if you touch Superman when he gets shocked, you get super powers! It’s true! Happened like three-four times.)

Well. You’ve gone up a level, and you want to power it up.

You notice you just got something from leveling up. It’s an Augment Socket. Place the Augment Socket in your power. There you go, one socket, ready to take an Augment. Better find an Augment to put in it. Here’s one. Damage. I like damage.

Hey, what’s this? You put it in the socket, and now there’s another socket below it. That’s a Refinement Socket. Some Augments have no Refinements. Some have one. A very few ones have two or three.

Let’s level up a few more times. Two, three, and that’s four. Four Augments per power. Right now, a base Augment is a 25% boost, so that’s 100% damage if you slot for nothing but damage. This may change as we test things, and certainly, we expect to have more powerful Augments later. Don’t worry, we’ve balanced for it all. (The numbers are not, strictly speaking, exact, due to various formulas involved - that 25% boost is to something called Output you’ll hear more about one day, and not Damage directly.)

But what’s this? There’s something right on my power set. I can put an Augment there. But it won’t take just any Augment. It’ll take a Power Set Augment. What do these do? Well, we’ve talked about how you can customize your attack’s color - red lightning, blue lightning - and its animation - pulse-sharp shocks, a constant stream, a jacob’s ladder - and how you can even use weapons with it or not, if you choose - a magic wand, a ray gun… but what if you want more than we give you?

What if you take this two-blades set and you want it to symbolize the focused totality of your psychic energies? Well, we can’t predict everything, but we can give you a punch dagger. And you can paint it translucent pink. Good start. But it won’t be the same unless it does psychic damage. So… let’s find a Psychic Power Set Augment and put it in. Hey, look. Now your knife does Psychic Damage instead, and your enemies all get headaches when you stab them. Flaming Fists? Freezing Bullets? It’s all possible. No Refinements there, though. This works for primary and secondary and even tertiary power sets.

But sometimes there’s weird things, like a static bonus to regen, or a travel speed boost for all power sets. Those kind of power set augments get to live in your tertiary sets. But you only get one or two per character.

Now, these are just the default types. And they’ve got a limited number of things they can do. Extra damage, extra accuracy, less energy spent, extra secondary power boost, extra primary power boost, extra protection of various types. If you get 49 levels above the place you got it at, it’ll decay to half power, but it won’t fail entirely.

Crafted items? Well… those are another story. And I’ll give you two little teasers. First, you’re not going to be carrying around fifty pairs of fairy pants. The things you make come from what you see and do and think of, not from looting the fallen. Second, remember what I said about mixed sets? Those may not exist, but simple sets will. Slot three of the right kind of augment, and you might just get a little bonus. And they don’t decay at all.

Catch you later, heroes. And villains. Augment yourselves! Read a book!

As always, to discuss this update, catch us over at the City of Titans forum.