Two years ago, we gave you a 4th of July vid. Two years later, we give what you might call a VASTLY superior sequel.

But don’t watch it and wander off - there’s a special treat at the end of this. In fact, there’s four stages to this: Video, Hand, Comic, and Special Treat. Check each of them out.

City of Titans Presents: A Fourth Of July Video!

Two years ago, we gave you a Fourth of July video.

We’ve grown a lot since that old video and I’d like to talk about what you saw today. If you don’t remember, here’s what we had for you back then.

If you look closely, you’ll notice that you don’t even see the ground. We had a static statue, and some camera tricks. Now we’re showing it off, with grass, and plants, and trees, as well as buildings - some even have interiors if you look at the ranger station as you pass by.

Our first zone. Meet Lockharde Island. It’s going to show up a few more times before it’s done, but I like to think this is a credible first start. There’s not much to it on the surface, but rumor says you should beware the Evil That Lies Within. Of course, that’s just rumors. It’s a pleasant place, like Liberty Island in New York City, that holds the city’s trademark Phoenix Lighthouse. (as seen on our logo) (We’re currently trying to decide the precise location for the Lighthouse - it may wind up in Alexandria, Liberty Harbor, or Lockharde. For this video, we’re trying it out here to see how it looks. Same for the plaque - it’s there to show you will be able to actually read the plaques and badges in game.)

A wonderful place for fireworks on the 4th of July.

Now, you’re seeing a lot more than just a zone here. We couldn’t get buoyancy running in time, but we did get not one, but two different kinds of AI.

One is controlling the Ferry. It’s called a spline based pathing system, in which we draw a line, and the AI follows it, unless disturbed, at which point it attempts to return to it. It’s very basic, but it is amazingly suitable for mass movements - like civilians or traffic, as it requires almost no computation.

The other is a behavior-based pathing. We tell the AI where it starts, and we tell it where it wants to go, and it finds its own way between them. This is good for any kind of enemy - and it has a lot of flexibility, because ‘where it wants to go’ can change depending on what happens. “I’m in combat and I haven’t been attacked yet - find the nearest ally group and run for it.” is one example I’m sure we can all remember to hate. Patrolling a map dynamically, working a job from nine to five, going out to a bar, going home, coming to work the next day - these are all behavior based pathing.

One day, we hope to have contacts that behave as intelligently as Skyrim does. Using this kind of AI gives us the power in some post-launch update. (Seriously, we’re not going to promise doing that till we’re working full time.) Getting the base code working now, gives us the power later.

You’re seeing our first ‘wilderness’ zone, as well as our first zone. Our trees, our grass - look at the density, without dragging frame rates down to single digits. Our Park is going to be a-maze-ing. 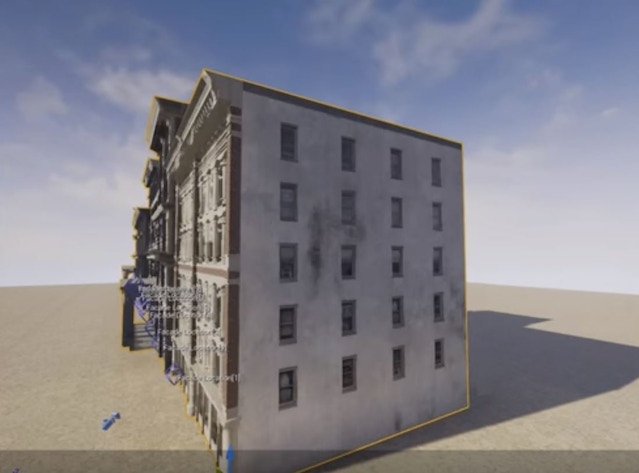 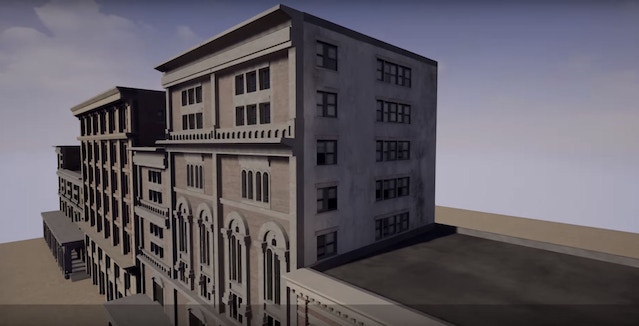 Oh… and look. Up in the sky. Clouds. Some of you asked if we were doing them. I think this answers that. They move nicely, don’t they? I love how the setting sun lights them up.

City of Titans Gives The World A Hand:

We’ve got a lot of talented people in City of Titans. And our Business Manager, Terwyn, is one of those. (You may remember him - he’s the one with the shoulder dragon.) You’ll hear more about this in the next update. But suffice to say, it’s big news, and it’s one that’s been in the works for several months.

As part of gearing up for regular convention appearances, we decided that we’d need effective costumes to support our presence. The first costume we decided to create was for one of our key characters. You all know her as Anthem. Here’s a sneak peak. 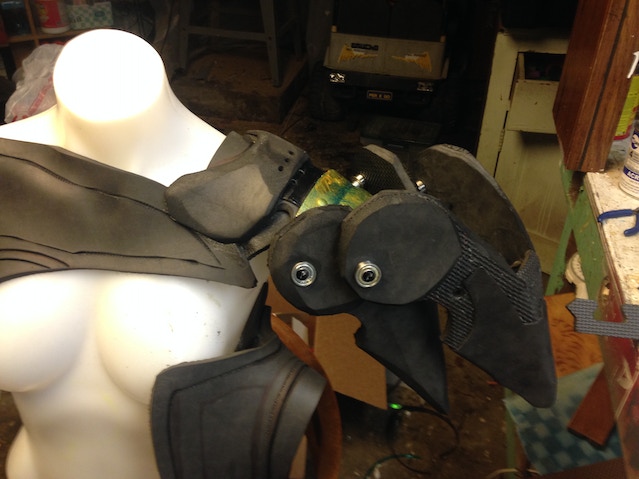 But there’s a bit more to it. Anthem’s been hurt badly - she lost much of her arm saving the city during the Atlas Event. And… well, let’s say that with one thing and another, Missing Worlds Media is actually doing something good for the world at large. We’ll tell you all the details next update. For now, we can say that we’re going to give some people a hand when they really need it.

We’re putting together a webcomic! It’s the best of both worlds - our writers get to test ideas about the game’s story - and your feedback will tell us what kinds of stories you want to play through.

We’ve got a lot of talented writers, and a lot of talented artists. Some of the most talented, though, need a little money in their lives - they’re willing to work for us, but they need the dough. So, we’ve done a fifty-fifty deal with them.

You get a great comic about a fantastic character I’m really pumped about. And the people who wanted to support us after the kickstarter closed get somewhere to put a little cash.

Even better, the constraints of telling the comic’s story will help us design the city better - what parts look right, what parts don’t. Basically, everything you see is concept art for us.

If the first comic does well, we’ll start a second, and a third. Maybe we might even do special issues in print one day.

The core point is, your support for this comic - we’re going to be using Patreon to run it - will get us artists and writers who normally wouldn’t be able to work for MWM. And it’ll get MWM a little extra spending cash to use for bandwidth, updated hardware, more space in the colo where the servers live. Maybe even the ability to hire outside artists to do more costumes for us, and you.

So, without further ado, meet the Sensational Character Find Of 2015, HIJINX! (why, yes, we have been working on this a while) 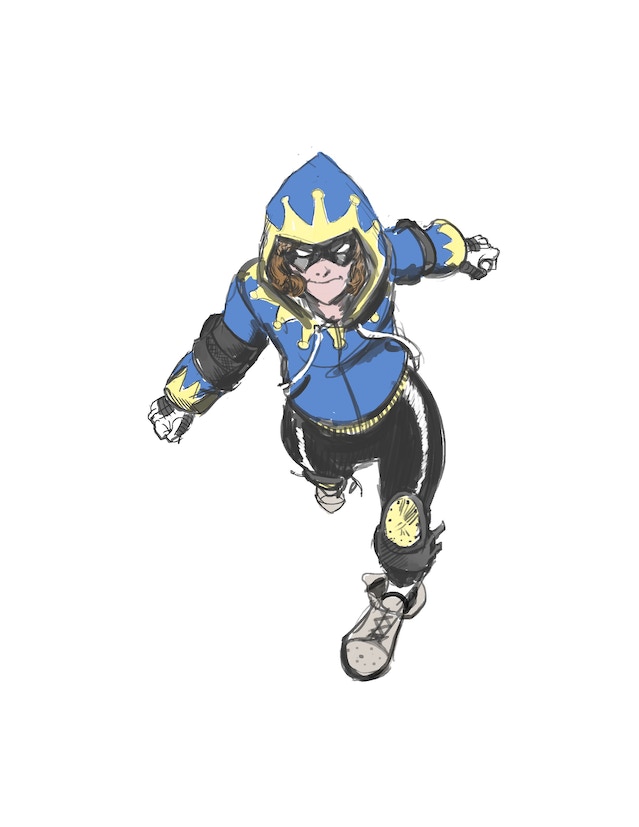 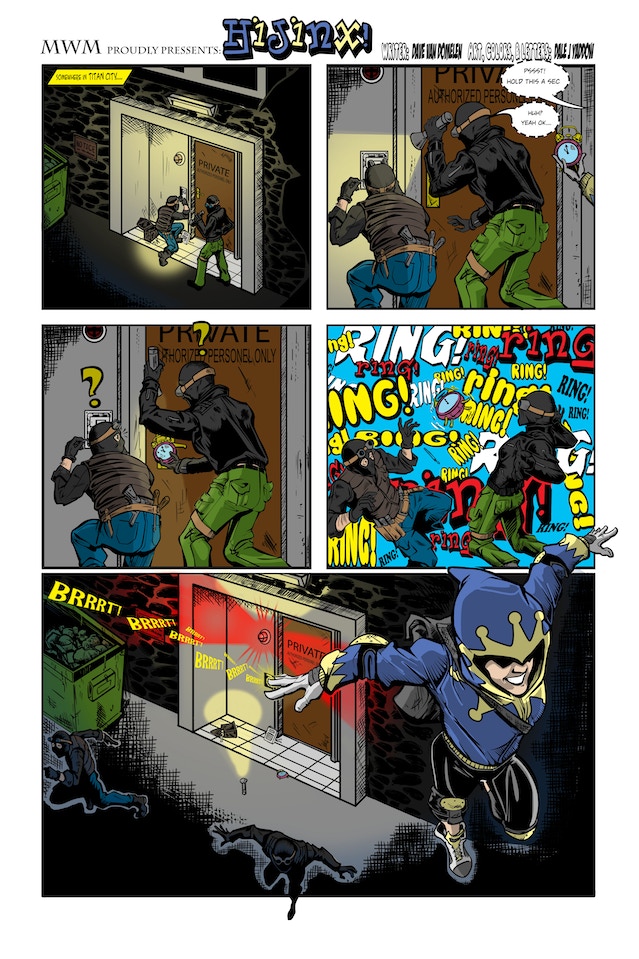 Hijinx answers the question of, what happens if you give someone plenty of power… and the ability to be fairly darn irresponsible? There’s a huge city to go play in, and she’s easily bored. Let’s see what happens!

One month ago, we showed you this picture: 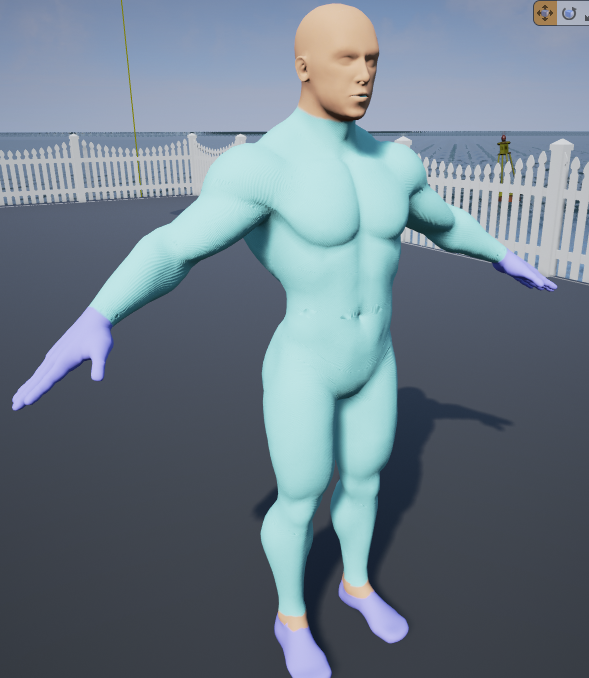 Well, we’re making progress. A lot of progress. Missing Man, take us away! 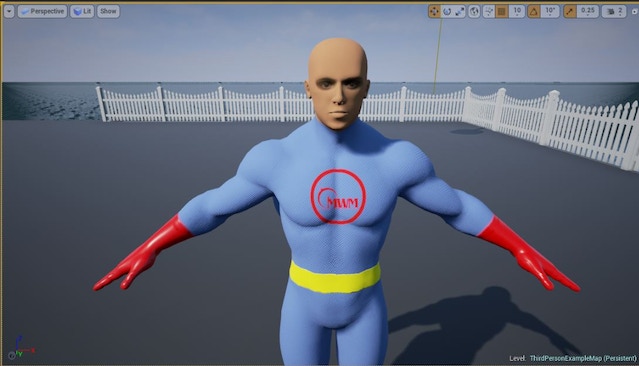 You’ll note his gloves go a lot further up on the wrists than the first picture. And our shiny - and sharp - chest logo. 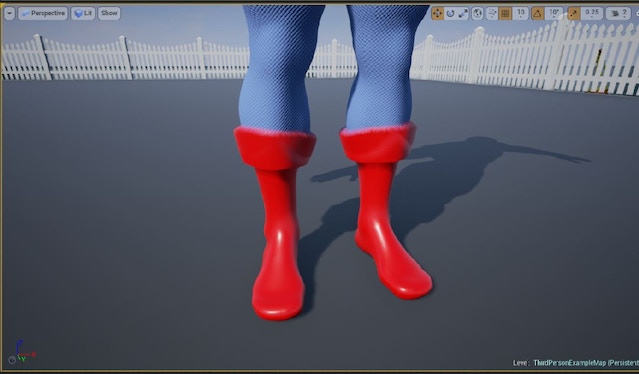 And his snazzy boots - they’re not perfect yet, there’s some detailing we have to do, but you can't have superheroes without swashbuckler boots.

But it’s getting a bit cold outside. Someone left the Barnes door open. It’s Winter, you know. 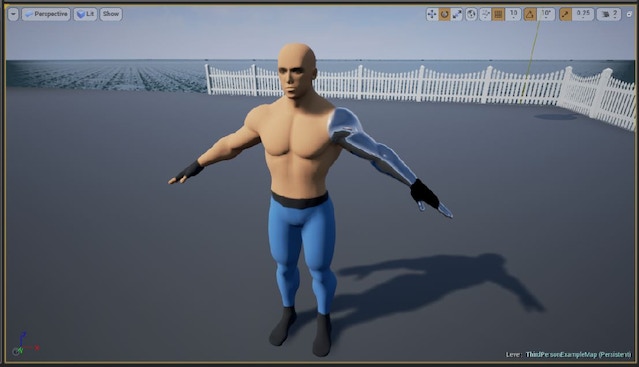 Notice the gloves are on top of his cyborg arm, and the boots are a different length than either of the two above.

We’ve just about got it perfect, folks. I know you've all noticed how most games have jackets that have to be the same length, shirts all the same shape, boots that always cut off at the same location.

You’ve also wondered why we haven’t integrated the costumed characters into the main game.

It’s because we’ve been trying to create the most flexible, most powerful costume creation system any game has yet done. One that’s easy to use, but with infinite potential - and with potential for future growth.

We’re not done yet, but we’re well on the way.

Things are starting to come together.

Next year, I want to spend the Fourth with all of you.

This update brought to you by Team Prototype, Nicholas over at https://twitter.com/_enter_reality_ who’s stepped out on his own (and just got married! Congrats, Nicholas! Go over and wish him well!), Missing Worlds Media Publishing, our PR team and our Business Manager who decided to get into 3D printing with Bleys Ingram…