Happy Halloween, everyone. We took a few extra days with this update, but you know what that means. It’s going to be long, and it’s going to be good. That’s what a late update meant in the past, and that’s what it’ll mean in the future.

I want to make this clear, before I get into the hype - these are still prototype systems. The controls do not reflect a final product nor do they have the graphical improvements of candy colored buttons, the skin is revised from last update but not finished yet… well, I could go on.

Boo! Sorry, we had to do that, it is Halloween, after all. Like the flame aura?

This is a long video, with four parts to it, so I’m going to link it a few times at different time codes.

The costume works, it hooks into the internal database, where the name of the clothing item is associated with a unique ID (some old games missed this, and when a patch dropped and you went to change your look, whole parts of our outfit would be missing) and then associated with a clothing item, with appropriate color patterns, textures, and other items related to that specific item.

(Starts at 35 seconds in, if the timecode shift doesn't work)

You saw that right. Asymmetrical choices. Wear one glove on your left and a different one on your right. There will be more options than you see there - for one, the pants and shirt will change differently, but we simplified the wiring slightly for testing.

You’re seeing the ability to have a metal pair of pants, or stone, or iron, or gold. We’re giving you the ability to take a normal character in a suit, take him for granite, and play a living statue, if you so choose. That canvas bag mask for a scarecrow type? Turn it to leather for a chainsaw cannibal monster. This is a pretty big thing, we think.

The patterns selection is a little subtle right now, but it’s all about texture and cut. Do you want panel lines like a Jim Lee DC costume? Chunky armor like a movie hero? Classic 1960s spandex? Or something a little tougher?

And the ability to dynamically tailor your costume is pretty neat, too. Nice gloves - but do you want them in fingerless, to show off you’re an active type, or covered to hide your fingerprints? Short sleeves on your spandex? Culottes for the fashionable sort? At the spandex level, it can all be done.

And remember, if you want something bulkier, we can do that too.

(It's the Thriller dance, it counts for Halloween.)

Look around. Lock your target. Have a nice day. (Blinking is upcoming. It didn’t make the video.) Yes, you will be able to set your eyes asymmetrically, having a normal one and a targeting cursor. It’ll all be there - the glowing blue eyes of a heroic alien robot, the glowing red eyes of an evil alien robot. Cameras instead of eyes. The solid black eyes of soulless evil. The solid white eye panels of a masked hero. Cornflower blue innocence and the jaded green of a cat. Heck, even the square pupils of a goat are on the list.

It’s been a lot of work getting this far, and we’ve still got a long way to go before we’re done, but we’re pretty proud of how far we’ve come. And that we managed to show off costumes just in time for Halloween. 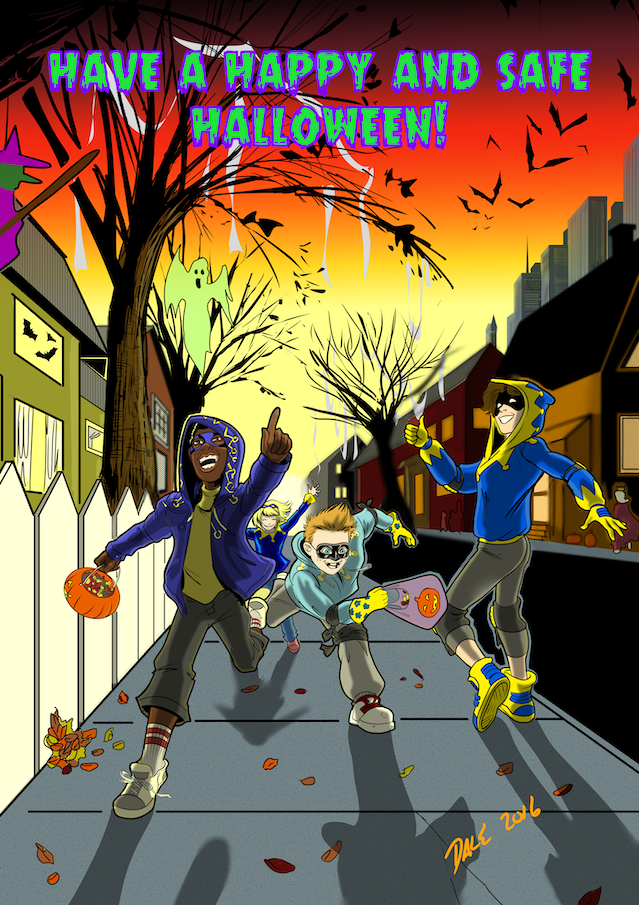 (Be a kids hero! Give out full size candy bars.)

Thanks to: Team Prototype, @_Enter_Reality_ ( http://www.enter-reality.it/ ) and the entire crew of Missing Worlds Media and City of Titans.

Support City of Titans by supporting our Patreon - and get a fun webcomic! Twice monthly now!

Discuss this update at: