As we here at Missing Worlds Media continue our diligent work constructing the game, we are continuing our series of interviews with the development team to get some more personalized perspectives of the project and progress.This week we are going to dive deep into neighborhood development for Titan City with environmental artist Nathan Purkiss, AKA, Red Warlock.

Before we get into the interview, here’s a peek at some of his recent work on Victory Beach building an aquarium at the boardwalk:

CoT: What’s your job title with MWM? What departments do you work in?

Red: I’m the lead environmental artist for city architecture and natural landscaping in the game. I also help out with the PR team.

CoT: What are some of the features you have worked on for the game so far?

Red: I started out as the person making all of the landmarks and moguls in the game.

CoT: What are you currently working on?

Red: I’ve been at CoT since 2018. Over the last couple years I’ve gone from building 3D models for landmarks and moguls to building whole neighborhoods from the ground up. We have other developers who created the maps for the city, created the landscape surface for the city, and created some of the unique items like the Phoenix Fountain at City Hall, but most all of the buildings, roads, foliage and structures that sit on the surface of the neighborhoods are features that I worked on for the project. 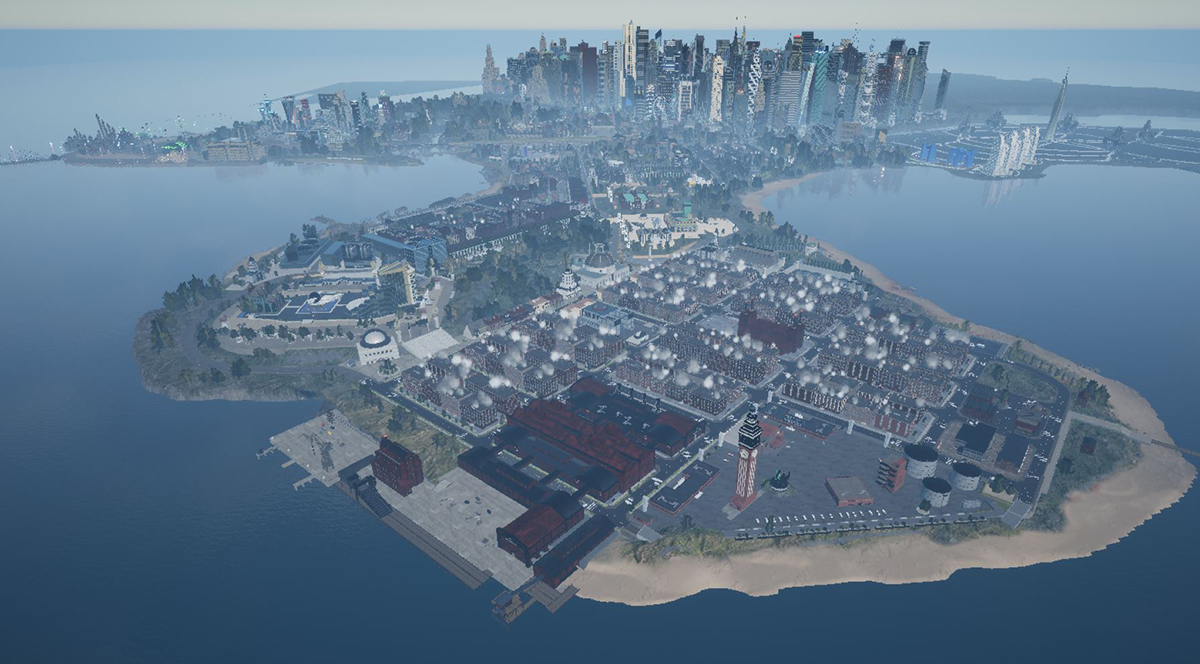 CoT: Your current task is building neighborhoods for Titan City - How is that going?

Red: I think pictures are the best way to explain this. Below is a picture of the launch area of Titan City with all that is currently built and placed in the game:

Red: The launch districts for Titan City include Alexandria, Old Bradford, Downtown, Victory Beach, North Eastern Research District, Aurora and Rhinehart Park. These districts are designated in white in the maps below:

Red: Alexandria is fully constructed and in final testing. What this means is that we are fixing anything that might be causing performance issues for players, like making sure it performs on Mac as well as Windows, and other technical fixes. But Alexandria is built, our devs are running and flying around in it every day and it’s looking very solid that players will have an opportunity to experience it soon.

Red: Downtown and Old Bradford are nearly finished being built. All of the buildings and roads are in place, but we are doing finishing work, like making sure rooftops look right and landscaping around the buildings are spruced up, fixing some broken roads and other small fixes wherever it’s needed. After those fixes are complete, Old Bradford and Downtown will need final testing like Alexandria is undergoing currently.

Red: Victory Beach and NRD are our neighborhoods that are growing the fastest right now. Many structures are built and ready for the neighborhoods here, but roads and landscaping work is especially needed to complete the environments. A lot of work will be done on landmarks and moguls in these neighborhoods in the coming months.

Aurora and Rhinehart Park (in development):

Red: This area of the map looks big, but it’s important to note two things. First, Rhinehart Park, one of the two districts splitting the white area on the left, is an open park area with only a handful of landmark and mogul structures to be built. Aurora is the one remaining launch District which has very little built yet and still needs lots of architectural work from the ground up. But now that the city has so much building stock to work with, it will be much quicker to build Aurora than the districts that have already been built.

CoT: What made you join the team? Did you play City of Heroes?

Red: I was in love with City of Heroes from the year it opened until I was holding my torch up at City Hall the night it closed. (My main character was Red Warlock, illusion/force field controller). So when the CoT Kickstarter happened years ago, I became a mogul contributor. And like a lot of mogul contributors, I was a little concerned that this really cool idea being offered for moguls might be hard for this all-volunteer team to pull off. So, after a few years I had this crazy idea. I went to the Gnomon school for 3D art and took some classes in Maya, and built my own mogul concept for the game, Black Star Tower. I shared the concept with CoT devs and they invited me to start volunteering to work on other people’s moguls. I’ve built 55 of them and am still cranking them out. (There are under 100 total in the game, so around 45 left!). 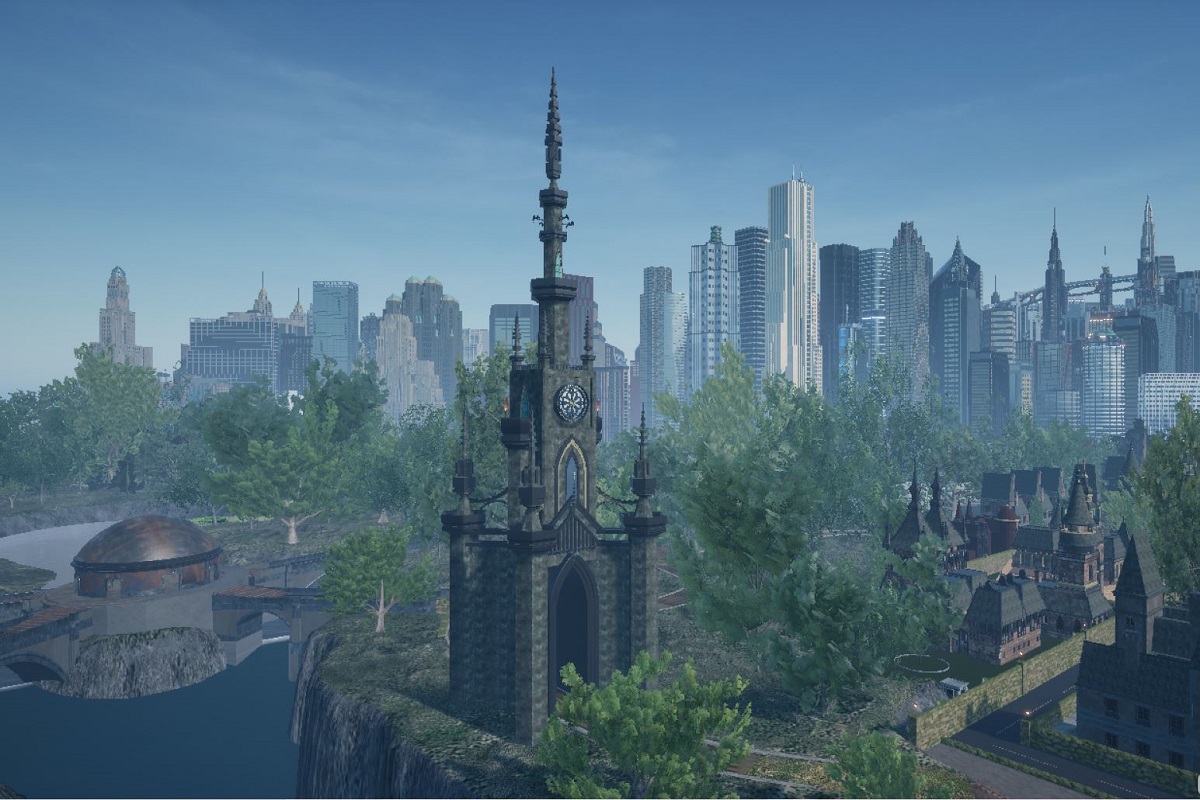 CoT: Like everyone else on the project, you’re a volunteer. What has the volunteer experience been like for you? How’s that been affecting your life, your family? Have you found value from the experience?

Red: The world has been pretty insane over the last few years, but this project is something that always continues to inspire me. So, I’m in for the long haul. I love it!

CoT: Is there anything specific in the work you have been doing that other CoT staff or players might not know about you that you want to share?

Red: Our lore team requested sky bridges between buildings in Downtown and I’ve been doing some work on those lately but haven’t shared pictures yet, so here’s something new to share: 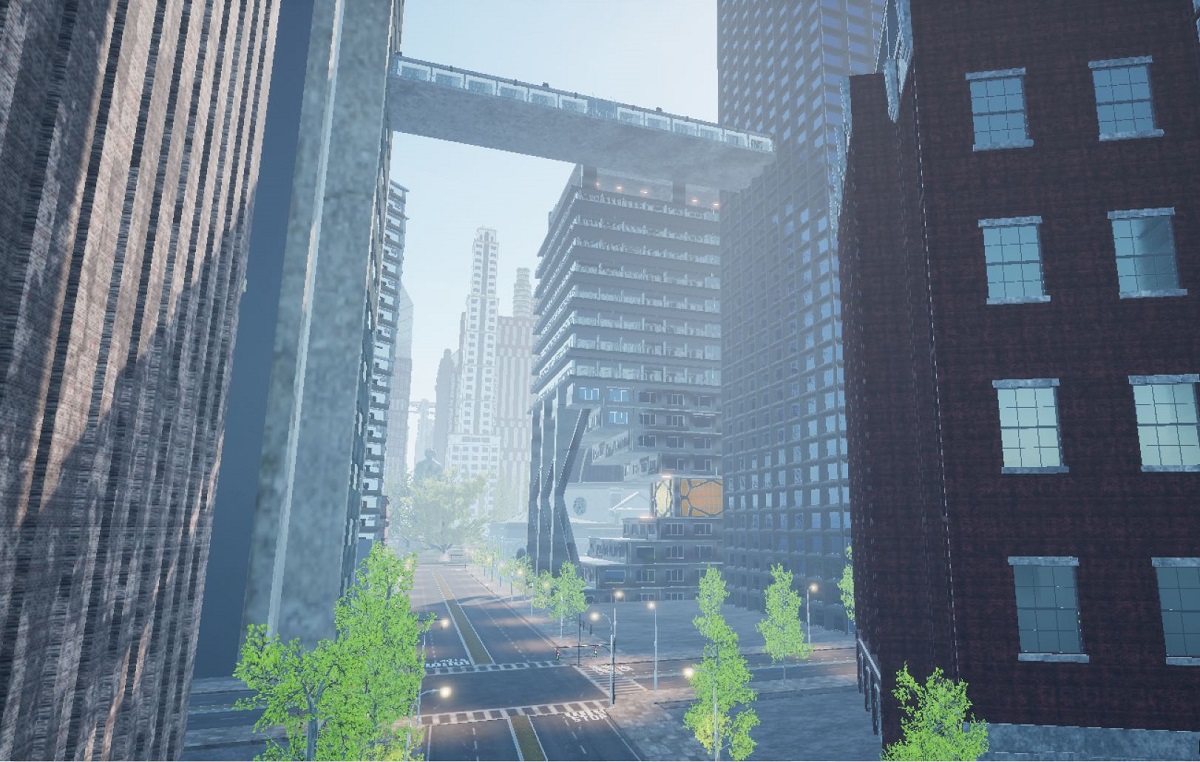 A sky bridge near Fitzgerald Square. 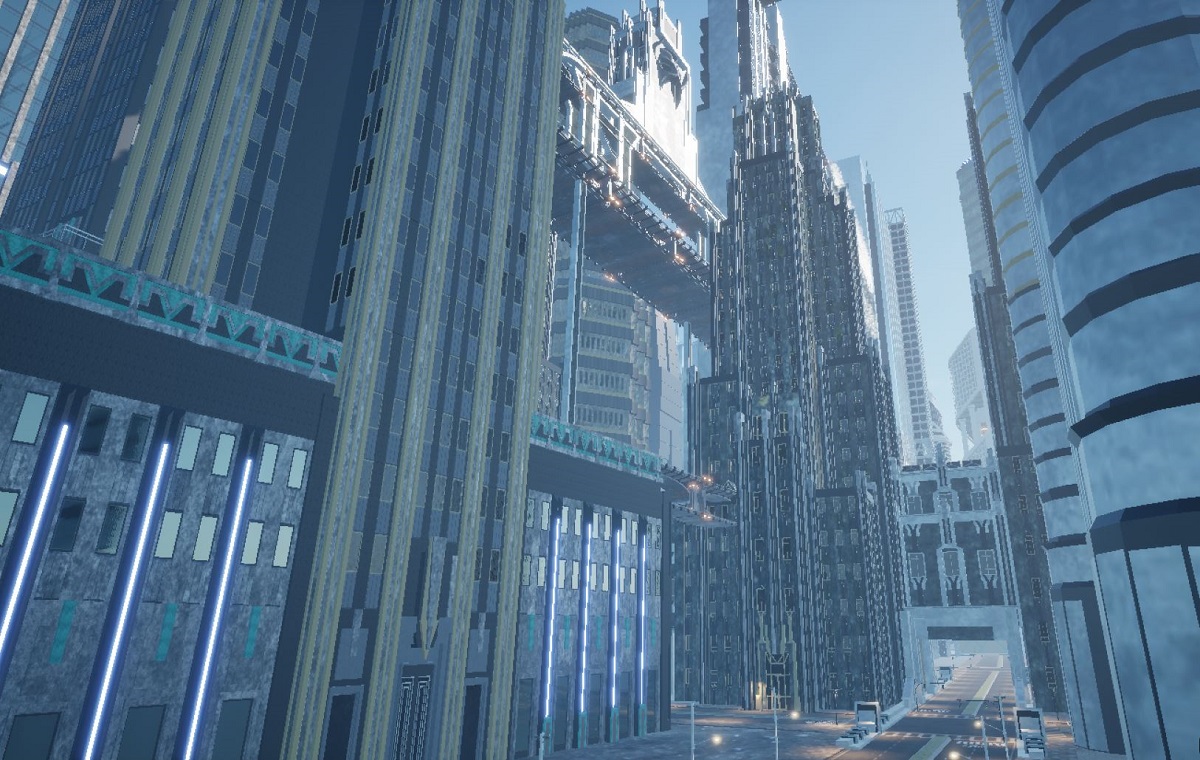 A series of sky bridges in the dense center of Downtown. 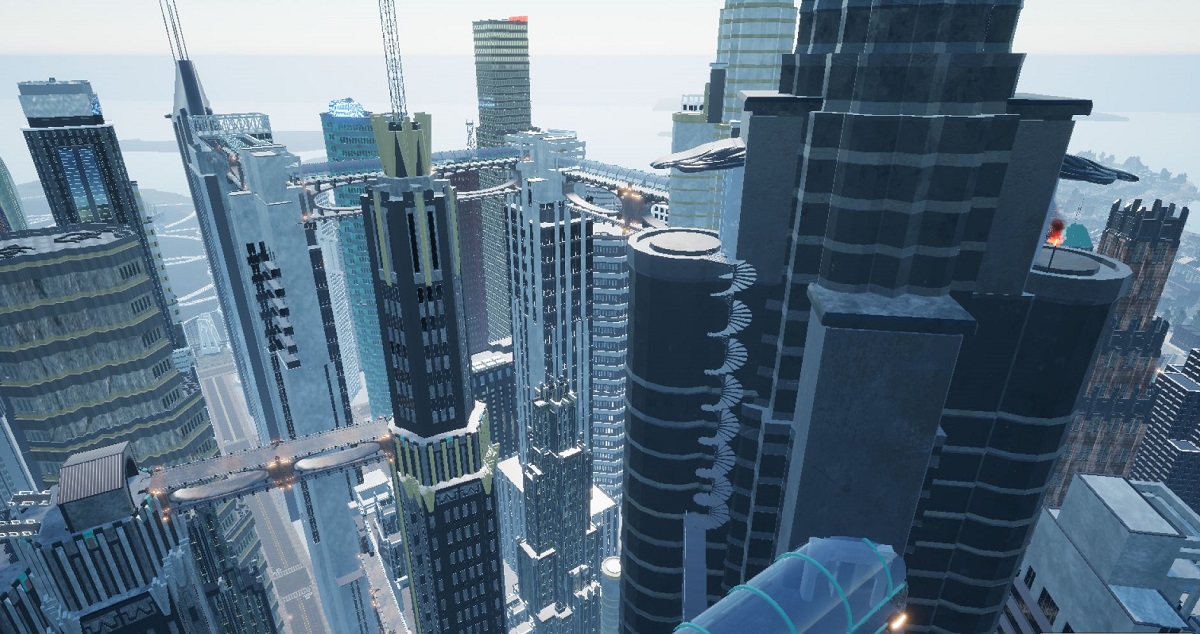 At the center of Downtown, several sky bridges connect high at the top creating a sort of road in the sky to explore, along with side walkways and staircases to secret spots… 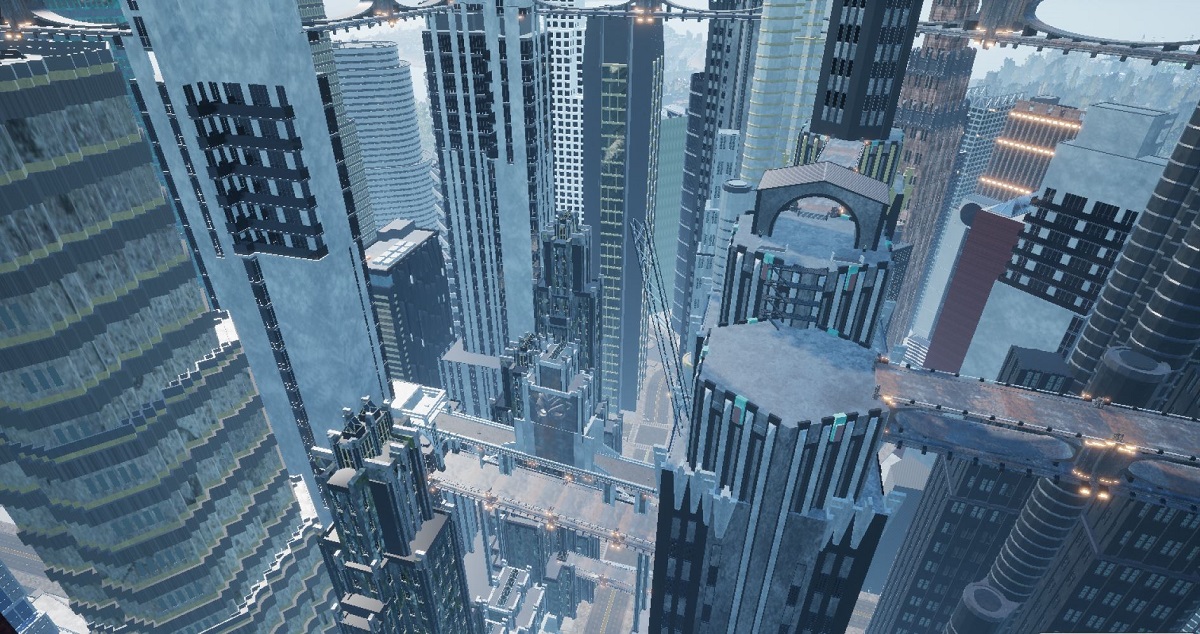 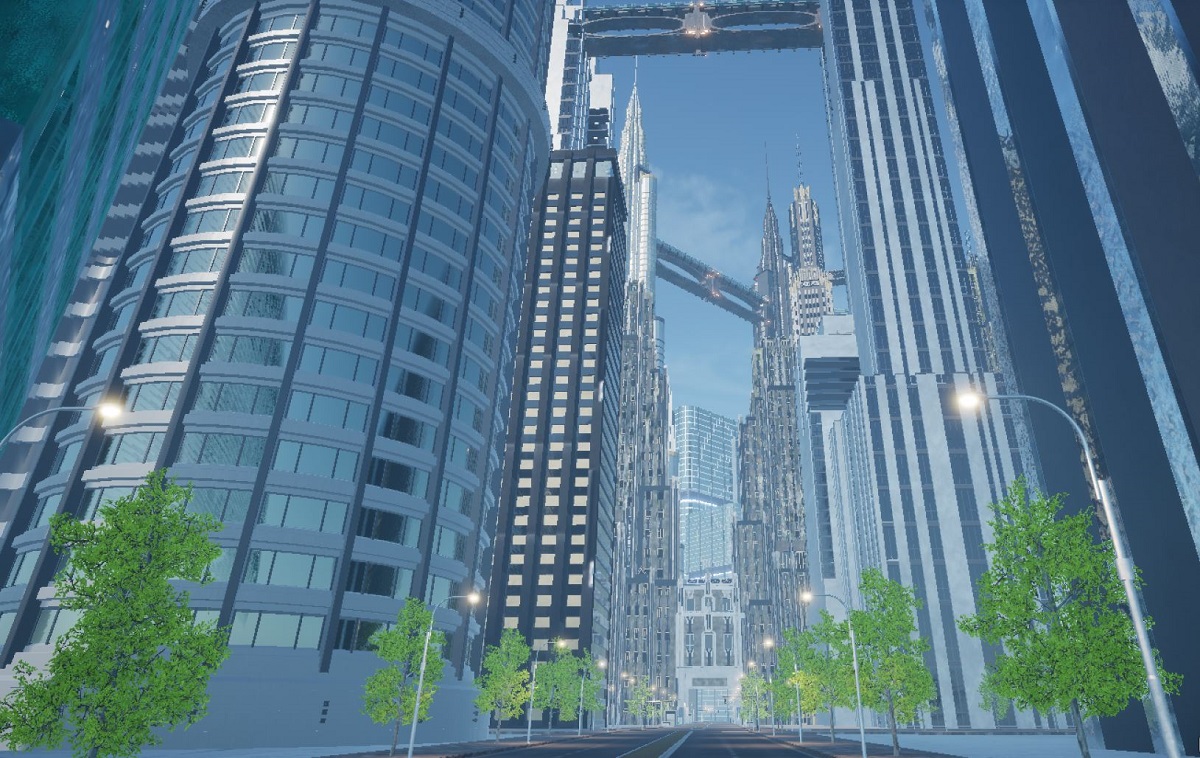 The bridges can be seen dramatically up high, but there are also low bridges that run close to the roads in many areas like the one at the end of the road pictured above…

We hope you enjoyed this update - see you soon for the next one!