Human female, mid twenties, dark auburn hair, grey eyes, 1.7m, 58kg. Casting: Rachel Weisz circa 1995
Hypatia Argyros (Pat to her friends since her freshman year at Chicago) was born in Sidari, on the north coast of Corfu, in 1990. After her parents were killed in an automobile collision in the city of Corfu, she was placed in the care of a high-ranking law enforcement officer and his wife. They raised her, and helped her to get a scholarship to the University of Chicago. After getting a degree in library sciences, she went to work at the Central Library in Titan City in 2012, and became a naturalized citizen in 2013. But this is not the whole story.

After the "accident" that killed her parents, Hypatia spent two days in the hospital, and was checked out after an attempt was made to kill her, interrupted by the Corfite police officer. His wife saw in Hypatia a potential for magic, and trained her. The scholarship came from a society of mages, as did the suggestion of where to seek work after graduation. A roommate at Chicago (an AFROTC cadet) talked her into taking lessons at a local kempo dojo, where she learned to use a staff as well as her hands and feet.

After coming to Titan City, Pat made a point of exploring the region around her apartment and around the Central Library. She came across an antiques shop which had in it a curious brass coat rack, the legs and arms of which did not match the shaft. After buying it and taking it home, she removed the fittings and found that the shaft was wood (oak, ash, and hawthorne, apparently spliced and grown together) bound in a net of an odd brass alloy. The staff could be used to amplify her power, making her spells far more effective…

In order to protect her identity, she went beyond the classic costume-and-mask. She used her magic to alter the appearance of the staff, to muddy the link to the antiques shop. While in costume, she took the name Goldenrod, and spoke only her best Midwest American. Out of costume, her Greek accent has made a gradual return.

In City of Titans, I’m looking at Goldenrod starting as a Sentinel, possibly retconning to Warden or Vindicator if/when those specs become available. She’ll use the staff as a focus, channeling her powers through it. She will be trying to stay in the Lawful/Peaceful/Honorable corner. Any missions for the Arcane Sentinels will be seriously considered, after all, they gave her a scholarship ^_^.

A question needs to be answered, though: Where is the Central Library? Somewhere near here, I think: 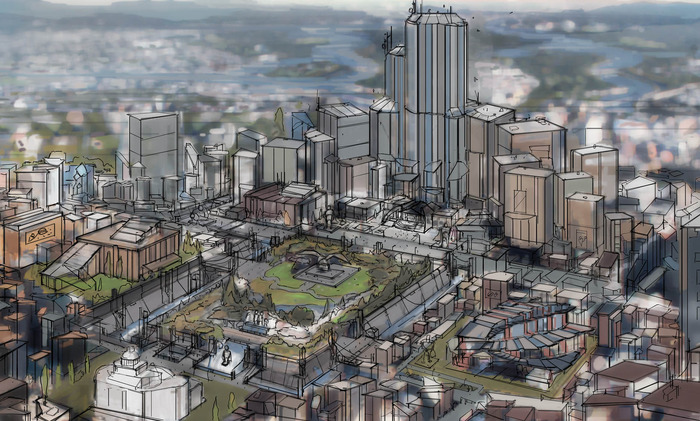 References for artwork, should anyone wish to make any ^_^:

Here's an idea for Goldenrod in uniform, rendered in the CO tailor:

The staff (sorry, no staves in CO) is about as tall as Goldenrod (170 cm), and about 3 cm thick overall. The wood should be of several shades of brown (oak, ash, & hawthorn ^_^) running up the length of the staff. The ferrules (2 end caps and 8 rings) should be of a brassy or golden color and about 6 cm wide, and if you get close enough to see them they have many arcane symbols inscribed into them. Some of these symbols may glow when Goldenrod casts spells, others are there only for decoration and grip ^_^. Between the ferrules is a network of fine wires of the same metal, but they may not be visible beyond the occasional glint of reflected light.
When changing the appearance of the ferrules, Hypatia drew from many sources. These four symbols are found at least once on each ferrule: On the face of one endcap (with different textures in place of colors) is:

and on the opposite end is:

For the rest of the markings: Hypatia chose other alchemical symbols (many can be found in the Wikipedia article); Greek, Sanskrit, Cuneiform and runic letters; and symbols from various philosophies and religions from those of the pre-Christian Celts to Taoism in the Far East, with a bit of Discordianism thrown in. She avoided those symbols and combinations of symbols commonly associated with a certain political party in Germany circa 1932-1945, as in Hypatia’s worldview these have been corrupted.

And if you want to go really close up, this image is not what the metal looks like at 500X magnification, but if you cut the amount of aluminium shown here in half it would be close.

Testing on how to scale down the hugeness of DeeDee's rendition of Goldenrod...

That seemed to work well!