Also, some clarification on those last two GIFs in the update….

This is a very understandable question as players have only seen small segments of video of wall crawling and this is the first tidbit we have shown of wall running.

*EDITED: I asked some folks for clarification... There are a few ways that wall running will be a part of a few travel powers. Super Speed can propel a player fast enough to run up a wall almost appearing to defy gravity. Parkour travel power is more gravity-based, but can run in short bits up along walls.

There is still some work to be done on wall running and wall crawling animations, but you can see a bit of how wall crawling, wall running, and even Parkour will look in these GIFs. Feel free to ask more questions if you have them...

Keep in mind these were sneak peaks. I am working on functionality right now. The actual implementation and interaction of the powers are not at a point I can discuss atm.

First, melee combat animations.
Pay attention to the FEET in this animated gif. Ignore everything above the ankles.

Are you seeing what I'm seeing? The feet are sliding around on the ground as if there was no ground friction. At no point do the feet get PLANTED and STAY THERE in order to muscle chain through the rest of the body creating the hit(s) that you're seeing.
What we're looking at here is essentially an artifact of how computers model animation of avatars, because everything is "center of avatar doesn't move" while all the limbs flail around that immobile point. That's why when the $Target gets hit, they "react" but they don't shift their location. Their body animates (feet and legs slide) but their body doesn't MOVE away from the hit they've taken.

Now, to be fair to amievil ... that's probably a refinement that's meant to be added later ... but I wanted to point out the simple fact that if feet have no friction with the ground, melee attacks are going to look comical rather than powerful.

Second, wall running.
Pay attention to the angle position relative to the wall of the lower and upper body.

From what I can see, there appears to be a fundamental body posture problem going on here when running on walls.
The lower body is staying perpendicular to the surface being run on, but then the upper body bends forwards at the waist, creating a decidedly odd shape that looks kind of like ... __/ ... if you'll forgive the ASCII art attempt.

For a 2 contact points movement style up a vertical wall, both the lower body and the upper body need to be aligned together at a specific angle akin to a sort of Ninja Run (or a Running Stickman, if you prefer).

The basic idea here is that the faster you're running, the more you need to lean forward.

The whole idea is that by leaning forwards you're literally FALLING FORWARDS and simply using your legs under you to "catch" yourself from toppling over onto your face in order to run. So body posture (head to foot) "dictates" how fast you can run ... which works fine on the ground, where "down is DOWN" while running. But as soon as you start wall running with a 2 contact points movement style, things start getting a little wonky ... because "down is SIDEWAYS" when you're running on a wall (forward, left, back or right, depending on your direction).

So in order to make the "running on a wall" using 2 contact points movement style look good you need to start with the horizontal flat ground running pose/posture/animation and then add an additional "tilt bias" to the final posing so as to angle the lower and upper body away from gravity somewhat more.

If you can pull all of that together amievil with how wall running works in a 2 contact point context, you'll be doing good work!

He makes sure he can get the actual mechanic working before bribing over the code to our combat test island project.

Getting things to look right is less of a concern when prototyping. It’s more about the fundamental functionality than “does it look pretty?”. Fixing the animations or using better animations comes later.

That transition looks pretty smooth. Here's what I see:

All told, I really like the transitions shown. There's something wonky going on between frames 21 and 25 with both the angled body and the leg movements. But that happens in such a blink of an eye, it's probably not a big deal.

I think the wall running is okay. The L-shape of the body is a bit off, but not so much that it is off-putting. I understand this is a compromise between several factors. 1) Capitalize on the existing running animations of both the upper and lower body. 2) Angle the upper body in an effort to provide the immersive feeling that gravity is still in effect. One wonders how running sideways will be handled, however, as this L shape won't work for that. 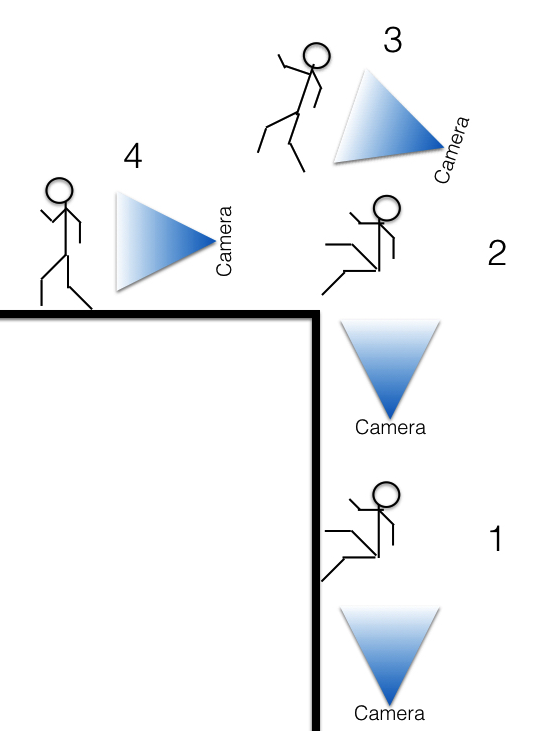 Very much appreciated. I hope this feedback has some value.

—
I like to take your ideas and supersize them. This isn't criticism, it is flattery. I come with nothing but good will and a spirit of team-building. If you take what I write any other way, that is probably just because I wasn't very clear.
Top
Sat, 09/11/2021 - 13:07
#9
amievil
Offline
Last seen: 1 month 2 days ago

As of right now all you have seen is WIP and will change.The actual transition from running up to reaching the top has not even been added, but will work mostly as Huckleberry depicted. The natural progression of the work I do is get it working first and foremost. Then I add in things like transitional animations and conditions. The very last thing I do is make it look right. Hope this helps in terms of understanding what you are seeing.

The very last thing I do is make it look right. Hope this helps in terms of understanding what you are seeing.

Which is FAIR ... so long as you're aware (and every indication is that you are) that the "Player Experience" elements are quite incomplete at this point (Work In Progress).
So long as we understand you're not "done" with this stuff yet and development is continuing and ongoing, that's a more fulsome explanation of where things are going ... and how much further you have to go to reach a state of near completeness.

I believe that’s what’s currently being used as a target marker, but I seem to recall it’s not necessarily the final version.

I think what Redlynne's feedback was about, is that in any 'pedal' (foot) movement, at least part of the effort is to counter gravity. Actually, to Use gravity to produce friction and move along a surface.
Spiders, use magnets to stick their feet to walls. *grin* No, not really, they actually use velcro. It's the Geckos that use magnets... well, atomic attraction... Alright, we have no need to specify how it works, but Movement is all about working with/against gravity.
Skiing is 'tying some wood to your feet and flinging yourself down a mountain'.

These comments from AmiEvil make me very happy:

- 'All travel powers are just that, powers. They should make you feel powerful.'
- 'Combat for me is about feel. If it doesn’t feel right it will not be fun. I am making sure everything will feel right, and I plan to make it enjoyable for all.'
- 'Things not shown include the feel for players that do not want twitch gameplay. I am going to great lengths to make it enjoyable for all.'

So, I think what I was trying to say is that what is 'wrong' with movement powers is when they don't appear to interface with Gravity 'properly'.