Spring has finally started to make its presence known and our Coding and Design teams have been working hard to bring about a season of change. Thanks to their hard work we have a lot to share with you, so let’s start by bringing you something big.

The Mac Release is Here

Starting today, players will be able to download a new dedicated launcher that will install the MacOS version of the Avatar Builder from our webstore. https://store.missingworldsmedia.com/

This will have the same $50 or more donation requirement, but if you have already downloaded our PC launcher, you will not be paying twice. Backers will be able to choose freely between the PC and Mac launchers, and the corresponding clients to install.

The Mac OS launcher represents a stable Mac OS build of the game that we’ve been testing in house. There are still a few issues that are currently outside of our control, but we’ll be correcting those as soon as we are able.

-Installing on the Mac currently requires a one time special authorization because the game is not yet properly signed with an Apple developer account. This will be fixed before final game release. You'll find a breakdown of the steps you'll need to take here: https://cityoftitans.com/forum/mac-os-authorization-instructions

-The initial program startup on Macs will be slow, while the Mac's dynamic linker sets up the program for the first time. It may take up to several minutes before you see the splash screen, depending on the machine's disk speed. Subsequent start ups should be very fast.

-Because the Mac Launcher does not have the autorun checkbox of the Windows version, the 'Update and Start' button will need to be pressed a second time after a download to start the game.

-Macs with Nvidia GPUs are not supported; they may work to some degree, but Epic Games does not fully support them for their own Unreal based games. Macs with more recent Intel integrated GPUs may work, but you may need to experiment with reduced graphics settings to find reasonable performance. Apple Silicon Macs using the M1 chip are not currently supported, but Unreal support for these machines is in progress, and we expect to add them when Unreal does.

This is a full MacOS game client. Mac users will receive the same game updates as Windows users, and we’ll continue to make additions and improvements as development moves forward.

Also, the latest patch to the Avatar Builder will allow players to view and make power selections from our first five archetypes as part of the Character Creation process. For now, this is just to give you the chance to see some of what your characters will be able to do. We are still in the process of building and testing support for effects, appearance, emanation points, Props, and all the other game mechanics behind Powers. Once we have those ready, we’ll roll them out with future patches. 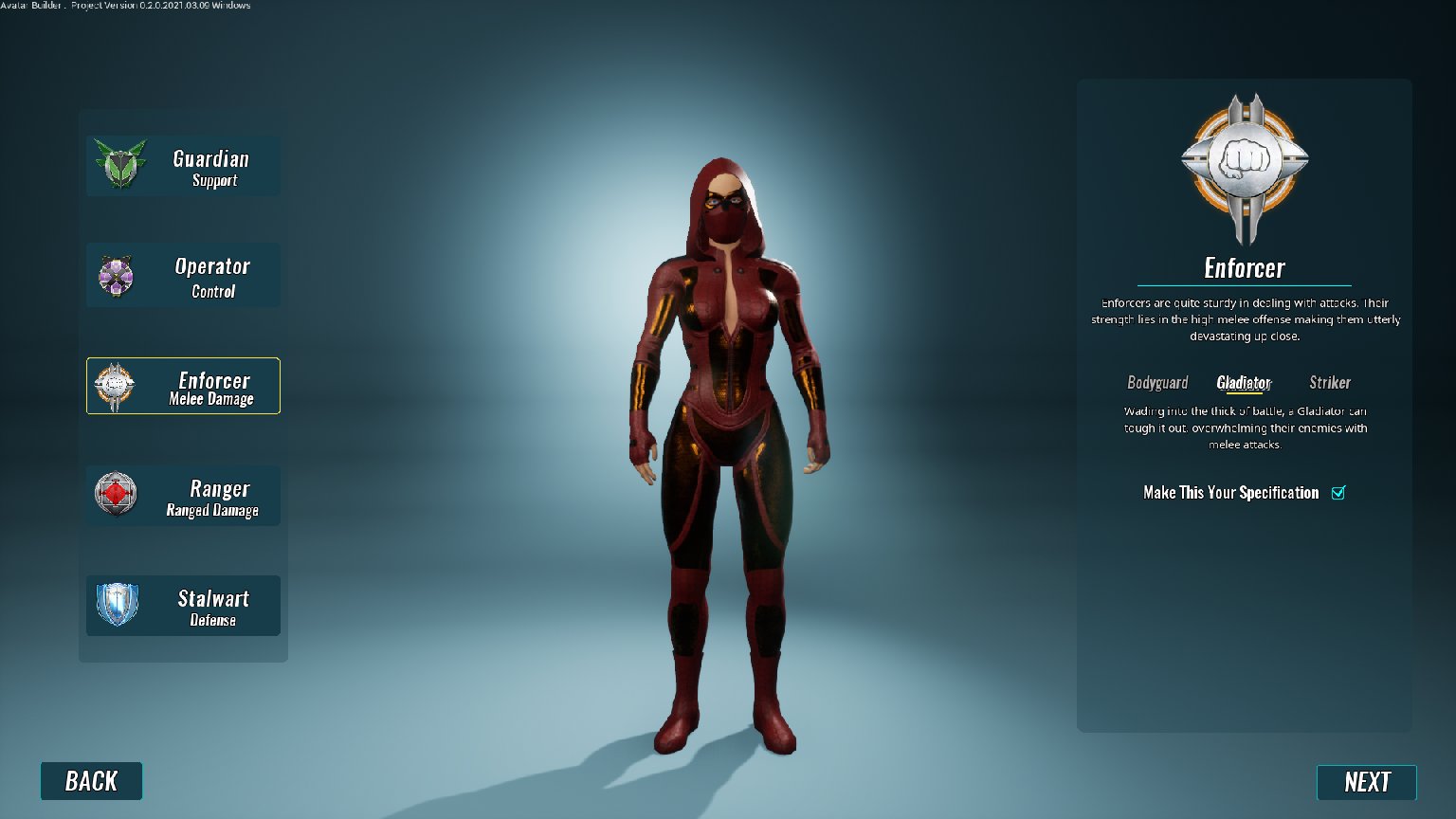 Once you’ve created and saved a new character, or loaded one you’ve previously saved, you’ll be able to select the ‘choose powers’ button. That will take you to the Archetype screen where you’ll be able to scroll through five different archetypes.

Each of the Archetypes will have one specification and a choice of five primary and secondary powersets, for a total of 25 full powersets to choose from. Players will be able to browse, choose and save powerset choices, and select their two level 1 powers. You will need to save your choices to move forward, but you’ll be able to change them freely for now. 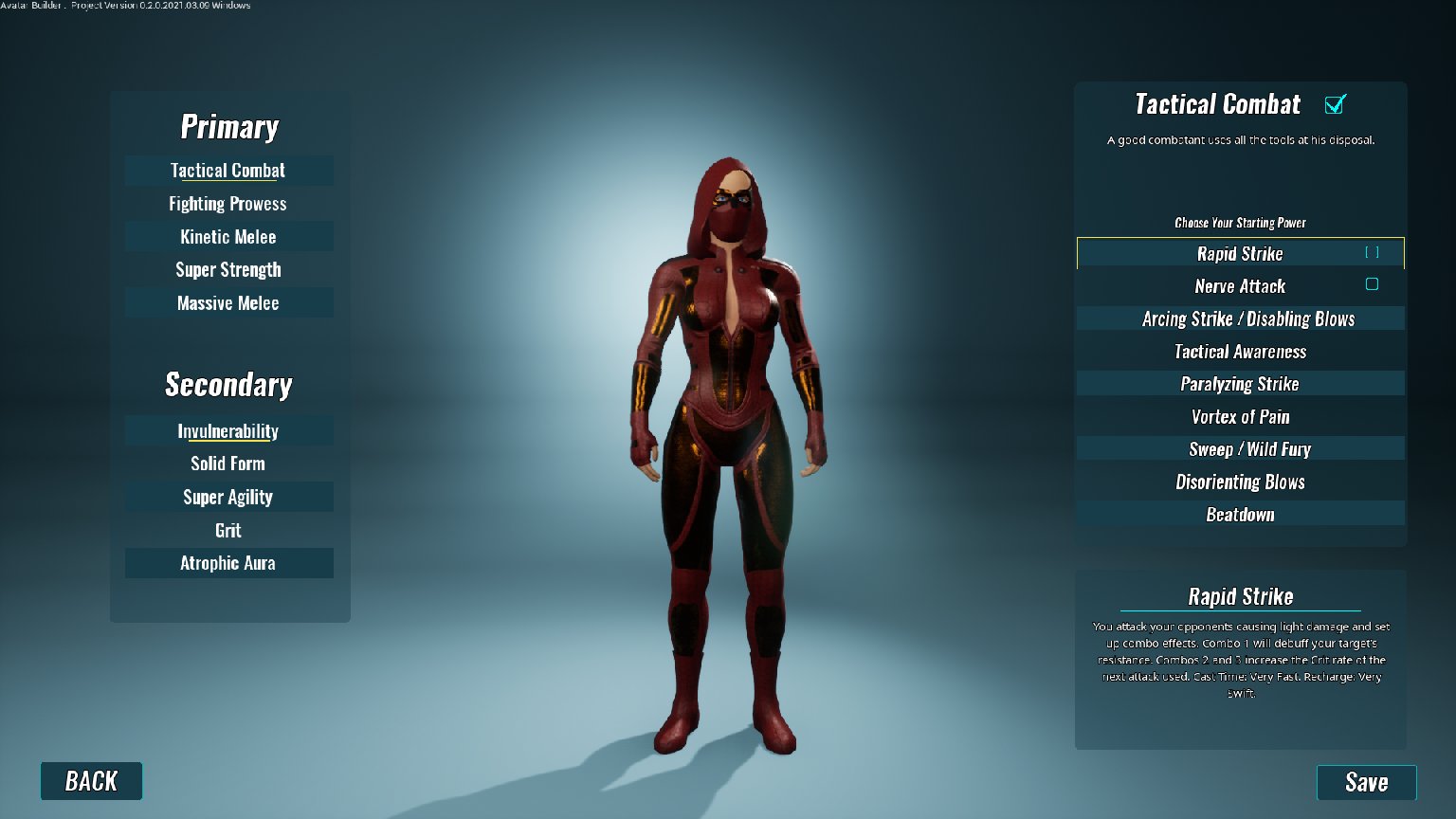 Currently, any power selections you make will be stored and edited through local files on your computer. Once we’re able to load powers into a server database, you will only be able to make changes while connected. 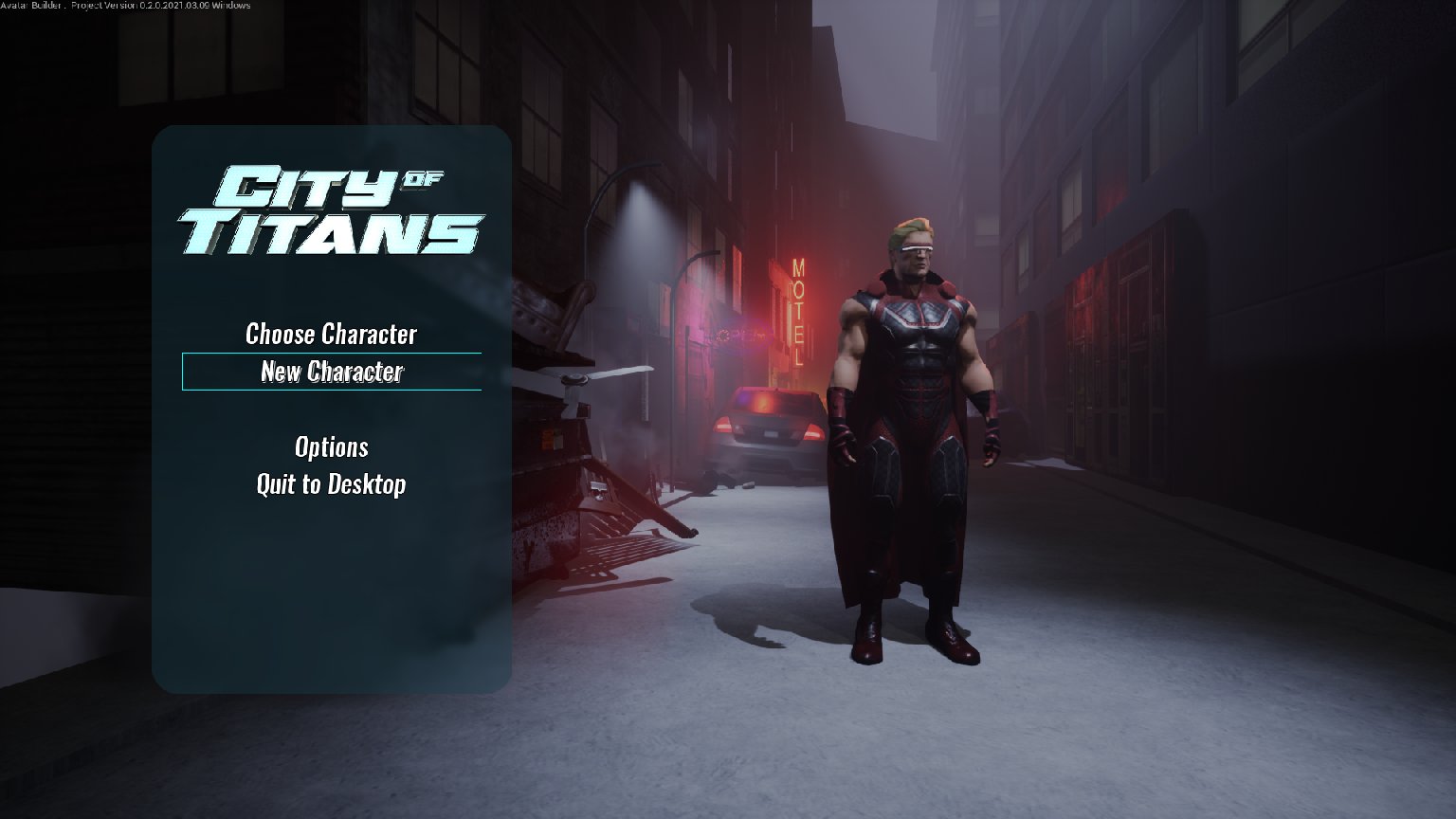 Another change that is coming with this patch is a new menu system. We debuted our first menu with the last patch, but various issues that came up in testing meant that we weren’t as happy with it as we would have liked. This update will bring a new design, and new functionality that will make it easier to integrate new game elements.

With the new menu, use the "New Character" button to create or edit characters in the Avatar Builder. Option settings from the prior menu package will not carry over to the new one, so you will need to reset those.

The new menu system has a specific set of keyboard shortcuts that are independent of any keybinds you’ve set up. We’re including a list of those here to make navigating the menus as easy as possible.

-The arrow keys can be used to navigate the menus, with the Up/Down arrows moving between selections, and the Left/Right arrows adjusting settings of sliders and multiple choice options.

-The ESC and Delete keys are a shortcut for the Back button.

-Return (enter) and the Spacebar will both "click" the currently highlighted button. 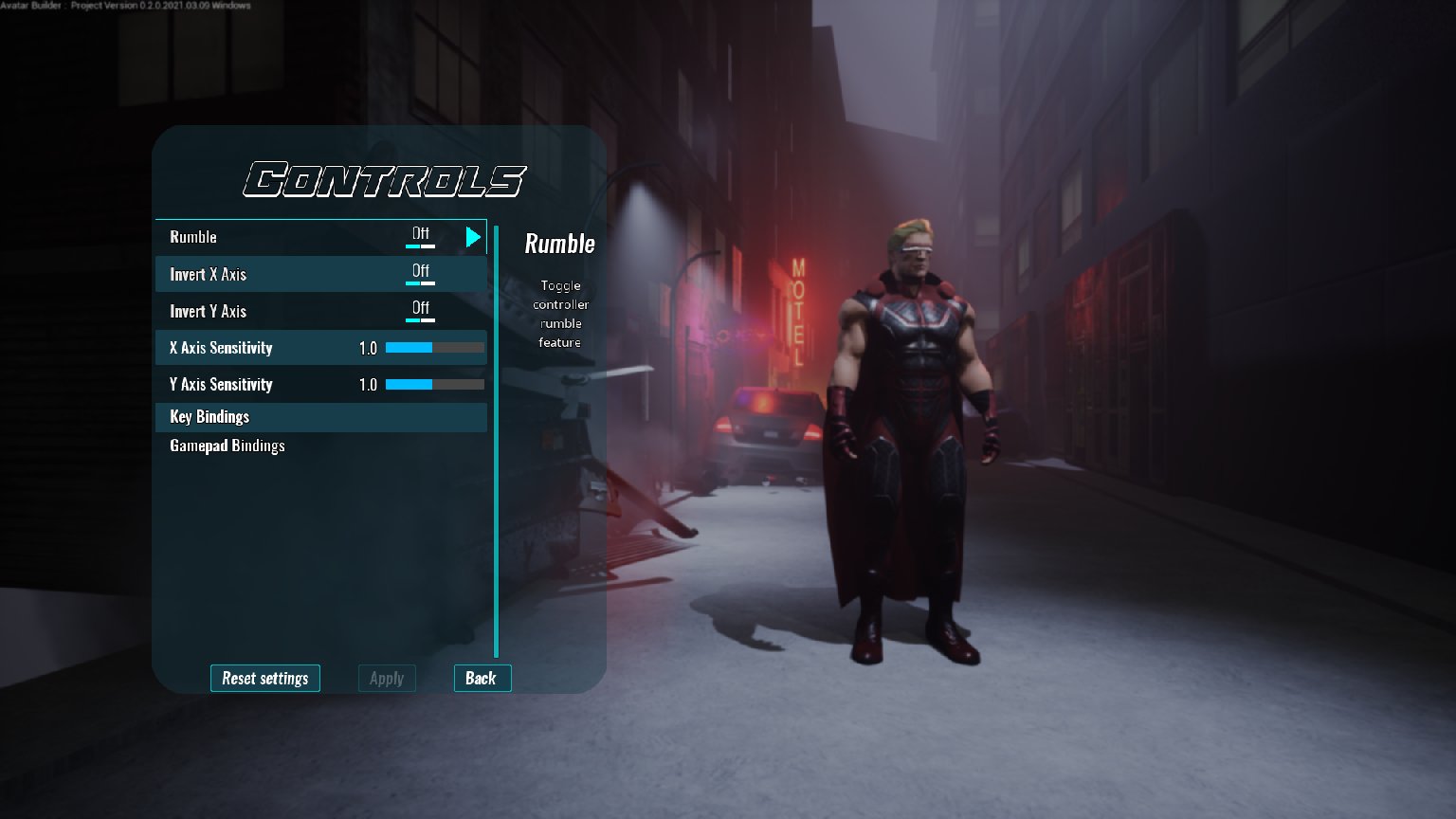 We’ve also implemented the controls for X and Y axis inversion and X and Y sensitivity. This only applies to changing the direction of the camera, but, if the character is being steered with the camera (by holding down the mouse button while moving forward), this will also affect character movement.

There are some known issues with the new menu system, but we’ll be correcting them as we move forward. A quick list includes:

-"Select Character" on the start and main menus is currently disabled, since it is related to server login, which is not in this release.

-Some of the game options are not working yet. In particular, none of the options on the Gameplay settings screen are active.

-Actions in the keybinding screen cannot be unbound from a key, once bound (the key can be changed, but not bound to no key).

-Gamepad navigation is supported but not currently tested for the menu system; it is not currently supported in the main parts of the Avatar Builder. Gamepad movement controls should work on the island, however.

-The M key will also open the in-game menu; this will probably be removed at some point.

-If the graphics settings are set lower than High, the game may develop a washed-out appearance. If the game starts in this state, try using the Benchmark button on the Graphics settings menu. This causes Unreal to run a quick test on your graphics performance and change the settings to what it thinks is appropriate. You can always turn settings up afterward, but performance may suffer.

-You may need two mouse clicks before you can interact with a new screen. This is a known issue that will be corrected in a future patch.

New Look for the Avatar Builder

Along with the changes to the menu, we’ve also started making changes to the overall look of the UI. The new look has been created for the full release version of the game and is smoother and streamlines information windows for less confusion. For now, the character build screen is still using the older design, but as we continue forward, it will be updated to the new look.

We’ve added coding to the Avatar Builder that allows us to designate certain costume items as usable only after it has been unlocked either through the store or gameplay. One of the costume items that was included in prior releases, the Tongue Lasher pants, is a signature boss item, and should not have been included; it is now locked in the current release. Locked items do not show up on the character creator menus; however, character designs already using a locked item will continue to work, but if a new costume part is selected in that slot, you will not be able to get back to the locked item.

Lighting Changes for the Island

Thanks to player feedback, we’ve been able to track down and correct various lighting issues on the island. The intensity of the sunlight has been reduced, fill lighting that had gone missing has been put back in place, and mysteriously missing shadows have been identified.

And finally, we’ve upgraded the Avatar Builder and all of our working projects to version 4.26 of the Unreal Engine. This is the final major version of Unreal 4. This gives us a number of additional features which are useful in character and map design, and keeps us in sync with the current releases of various supporting resources. This upgrade went very quickly and smoothly, and should be the last engine change for the foreseeable future.

That is a lot for one patch but there is a lot more coming. Our development team is making great progress in Powers, map improvements, and some more things that we’ll be talking about in future updates. We hope you enjoy the new features, and we can’t wait to see what new ideas you come up with.

In two weeks we'll be bringing you news about the next big steps for City of Titans. We'll see you there!

OR on our Discord! : https://discord.gg/w6Tpkp2