See our latest update! Next Steps for Building City of Titans!

Script for In the Spotlight! Season 1 Episode 1

Shadow Elusive: Hello, hello [pause for cheering] all you future members of the City of Titans, and welcome to: IN THE SPOTLIGHT! [pause for cheering] Yes, this is the show where we bring the various makers of City of Titans into the spotlight – like it or not [pause for laughter]. And I, Shadow Elusive, PR and Community manager, will be your host for the foreseeable future...or until they figure out my secret identity [pause for laughter]. But enough of that, let's go on to tonight's guest! Please welcome, one of the latest and greatest addition to the art department, Darin 'Tiger' Calhoun! Come on out!

Tiger: Uh, thanks, it's great to be here.

Shadow Elusive: It's great to have you. So, your capacity with us at MWM is what, exactly?

Tiger: I'm doing concept art, lore, and PR, but I am mainly the artist/writer for the official City of Titans comic book.

Tiger: Yep. I will try to make it a monthly comic. It will be quite a task but I'm working the process out.

Shadow Elusive: And you're going to do the whole thing yourself? What about the story you'll be telling, who decides that?

Tiger: Well the comic is mainly my purview, but I am working with Robin on that part. We'll have a big meeting in June about the overall concept and details. I would prefer to have the comic reflect the player's experience of the game, have it follow the story arcs of the game issues. I'm going to do my best to involve the players with various contests, but the details on how do to that are still in the works.

Shadow Elusive: So you're saying the comics will reflect the experience of a hypothetical player's character in the game?

Tiger: Yes. I would like it to go from the moment of empowerment, to fledgling hero, to finding a mentor, joining a group, fighting a major villain with a team, to becoming a fully fledged hero. That's the arc I'd like to follow for the first 12 comics or so. I'd also like to have some comics from other view points, including a heroine, a vigilante, and even a villain. They'd be vignettes at first, and if any of the characters become popular we can spin them off in a one shot or mini series with another artist.

Shadow Elusive: Wow, you're really planning to take this all the way huh?

Tiger: Yes, including having a physical comic book in comic book stores. Or an e-comic from most providers.

Shadow Elusive: So how did you come to be someone who could do all this? What's your story?

Tiger: Well, I've always loved comic art. I've been drawing as far back as I can remember. I remember watching the original Batman series with my dad late at night, and in school I'd draw Batman and the rest of the characters from the show. I actually went into the Navy so I could get a college grant to go to Joe Kubert's School of Art.

Tiger: I suppose. I was on the USS Iowa from 1986 to 1990. I started out as a boatswain's mate and later became a gunners mate for turret 3, the aft turret. That meant transferring out of my old division. About two months after that I heard there was another comic artist on board. So I went to meet him. Me and the other artist compared portfolios, and we talked until about 3AM. We had high hopes and dreamed of working for Marvel together.

Tiger: On April 19th 1989 there was a detonation in my old turret during a firing run. It killed 47 crewmen, including the other artist. I keep a list of their names on my wall. To remind me of the opportunity I have that my friend doesn't.

Shadow Elusive: I'm so sorry...but at least you had the money for art school.

Tiger: No, I didn't even have enough for a year.

Tiger: I had to take community college back home. That's when I published with Greater Mercury comics. It was crappy work, but hey, I was published.

Shadow Elusive: Wait, published? You don't happen to have any pictures from that do you? 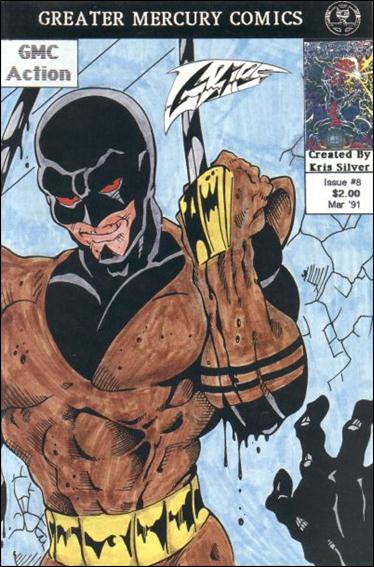 Shadow Elusive: Maybe it's just my untrained eyes, but that doesn't look so bad.

Tiger: It's your eyes all right. See, the owner of my comic book shop told me about a local Marvel artist, inker Mike Witherby. I called up Mike and asked If I could bring over my portfolio and he said yes. When I brought it over he looked at me and said, "Whip it out and put it on the table." So I put my best work on the table and he looked at everything. Then he said, "Do you want me to be nice or do you want me to be honest?”

Shadow Elusive: :winces: I may not know much about art, but I know what an introduction like that means.

Tiger: Yup. I told him to be honest, and he said my art was crap.

Shadow Elusive: :groans: I knew it...

Tiger: Yes, but it was actually a good thing. He told me why it was bad, and made me an offer. I became an assistant inker under him. I got no credit, but I learned the craft. And that's how my journey as a professional got started.

Tiger: Yep. With Mike we did everything from Hulk, X-Men, Ghost Rider, Punisher, and finally Morbius. Mike left Marvel and me when he joined Jim Shooter for the Defiant comic company, which unfortunately didn't last long. I and my best friend self-published his comic The Wild in '95. The Wild was drawn by my friend Josh Diffey. I did the writing, inking, lettering, coloring, and publishing.

Shadow Elusive: :interrupting: Hang on, all of that work and no pictures?

Tiger: On the contrary 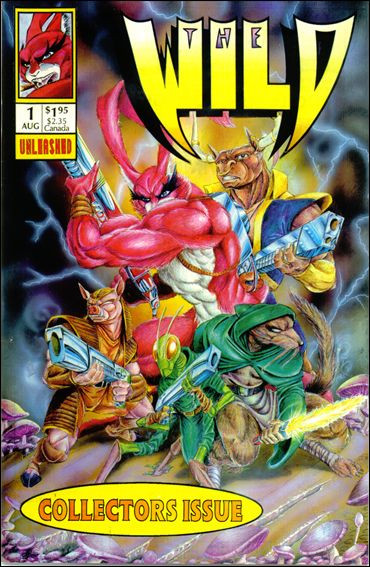 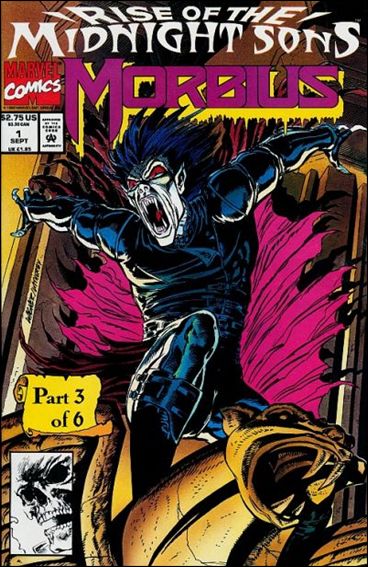 Shadow Elusive: I love doing that...okay, so then what happened?

Tiger: After 96' Mavel and DC were no longer accepting mailed in submissions. I did the various comic cons but I never got a break. And then in 2002 I was hit by a semi truck and I couldn't draw any more.

Tiger: I was hit by a semi. I had severe whiplash and concussion, and the bridges between various functions of my brain were damaged. I had to rebuild those bridges before I could work again.

Tiger: That's when I found City of Heroes. I used video games to stay active as part of my rehabilitation. And City of Heroes was a big part of that. I also started writing a book for the same reason. It took me seven years to finish. By then I'd also regained my ability to draw.

Shadow Elusive: Wow...that's quite a story you know. Most people could consider overcoming all that pretty inspirational.

Tiger: It's just life. We all have our challenges. There are those out there that have much bigger challenges than me, and they are my inspiration. ;)

Shadow Elusive: I guess we all look up from wherever we are. So what happened between then and now?

Tiger: Well all my contacts in the industry were gone by then. Career wise, I've been a house husband and aspiring author. But when I heard about the City of Titans project I had to try and be a part of it. I started doing art work on the forums and filled out the volunteer form and four months later they brought me aboard.

Shadow Elusive: Wait, don't tell me you weren't doing any drawing. You love drawing that much, you must have been.

Tiger: Haha, got me. Well there were lots of little personal stuff of course, but when Champions was in beta I did a pretty detailed drawing of some costume contest winners as a prize. 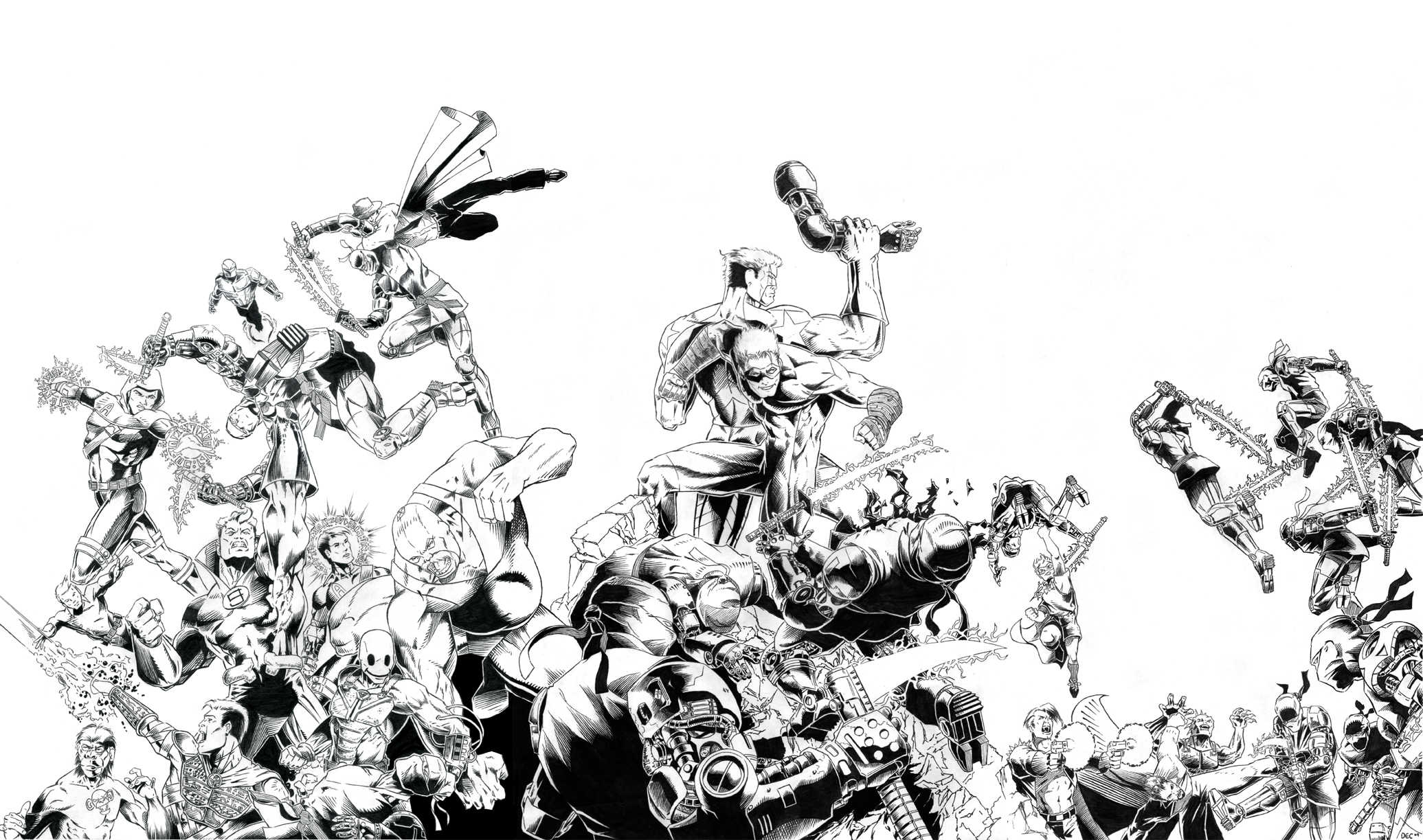 Shadow Elusive: Thanks, I really wanted to do that one more time. Okay, I think that about wraps it up for today—

Tiger: :interrupting: But wait, what about that fan comic I did on the forums? Hurricane Atlas?

Shadow Elusive: Nope, out of time. Besides, that's not a dev, we can't put that [announcer voice] IN THE SPOTLIGHT! [canned cheering]. I'm sure some other update will cover it.

Shadow Elusivee: Great! See you all next time folks on [announcer voice] IN THE SPOTLIGHT! [canned cheers]

Note: Request from Shadow. “Can we break up all those graphics into individual bits so I can yell 'Graphics Cue' more often? Pleeease?”