It’s been a long wait; but believe us when we say, it’s been even longer for us. Today, we bring you two long awaited releases - our Avatar Builder: Titan Create, and the Second Chance campaign. We wish this was the full Issue 0 release we’ve spoken of before, but we’ll get there - nothing has stopped us yet!

Whether you want to contribute to the Second Chance or just claim your Avatar Builder from your KS donation, you’ll start by making a new account at the the Missing Worlds Media webstore. You can find it HERE. after 8 PM Central time, 10/24/2019. 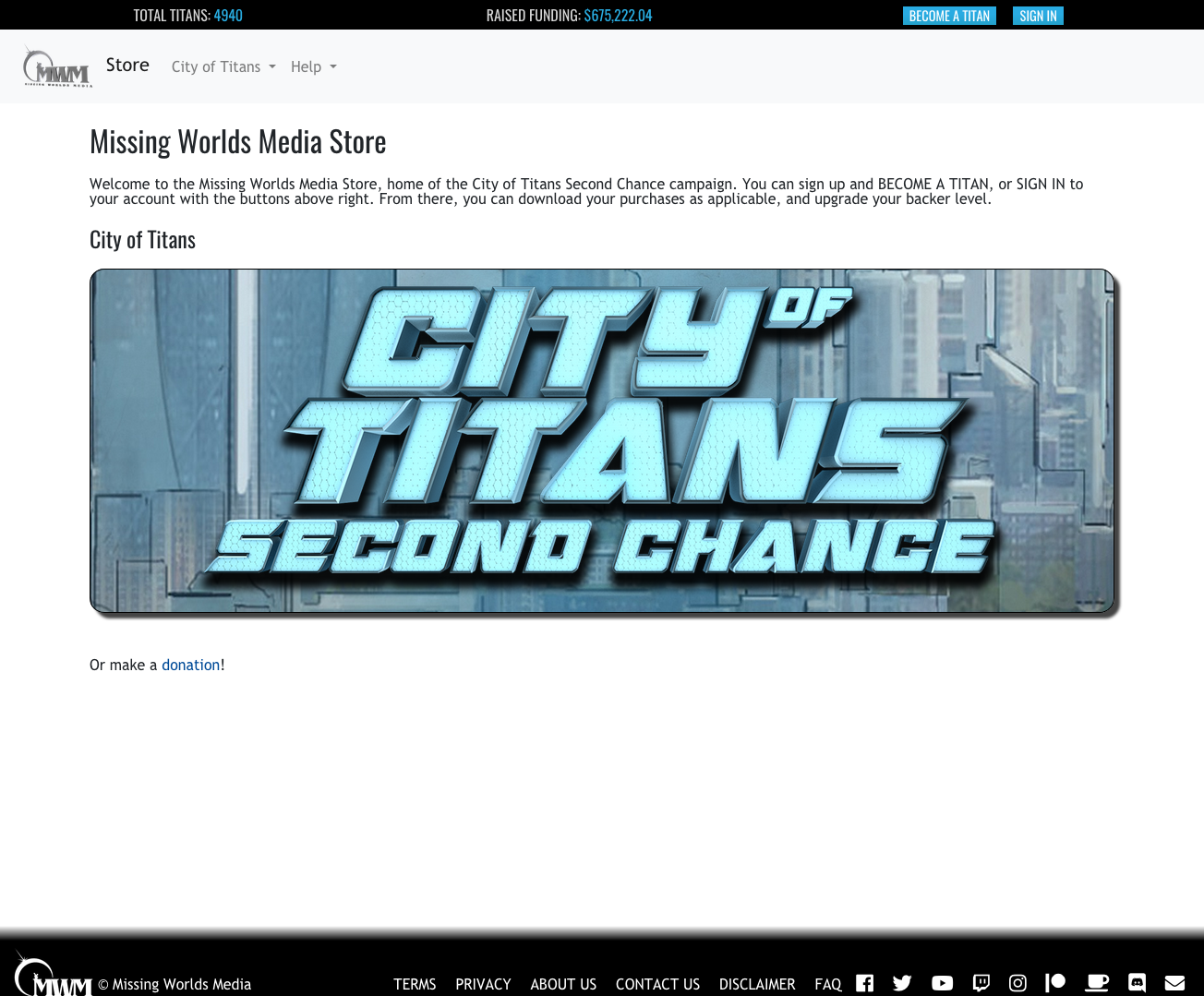 The Missing Worlds Media webstore currently features the Second Chance campaign, but will eventually host pre-sales and more. Second Chance is not part of Kickstarter, or any other crowdfunding site. All the money we raise here will go directly to Missing Worlds Media , and will be used for the development of City of Titans. We have chosen Stripe as our payment processor so we will be able to accept major credit cards. Apple Pay, Microsoft Pay, and Pay Pal are not supported yet, but we are going to add them when we can.

Now, on to the really important stuff you want to know!

As stated, regardless of whether you are a current backer or looking to become one, you will need to create a new account.

The webstore is not tied to any other account information you already have with us. Instead, it is using a database of our Kickstarter backers. After registering with the same email address you used with Kickstarter and verifying that address, you'll be asked to claim your Kickstarter record. If that's you, claim your record, and you're good to go! (If not, please contact us and explain the problem)

If your backer level qualifies you to receive a copy of the game, the backer rewards page (linked from the Second Chance page and your user page) will provide a download link to the Launcher, which can install not only the current early-stage Avatar Builder, but every update from now on without having to return to the store."

We’ll say it again, because we’ve waited a long time to say it: everyone who makes their account, correctly unlocking their KS rewards, will immediately gain access to Titan Create. So will anyone who donates enough to qualify to the Second Chance. This launcher will bring you every game update from now on. We’ll do our best to make them worthwhile.

(Note: the previous update had assumed the same distribution method as was used to reach our test base. This was in error and we apologize: emails are not being used to distribute the launcher. See above)

If you were not able to participate in our first fundraiser, creating your new account will give you the chance to get your own copy of the Avatar Builder and other special offers for City of Titans..

Once you’ve created your account and confirmed your e-mail address,, you’ll be able to make your purchases. Backers will see reward levels they have marked as ‘purchased’, and can claim their rewards (if available) from their Rewards page.

Wish you picked a higher reward level? You don't have to stop if you've backed us already! You can upgrade to a higher tier if you want, and if it's still available. To upgrade, you just have to pay the difference. (And if your old tier was a limited one, it's freed up for someone else!)" 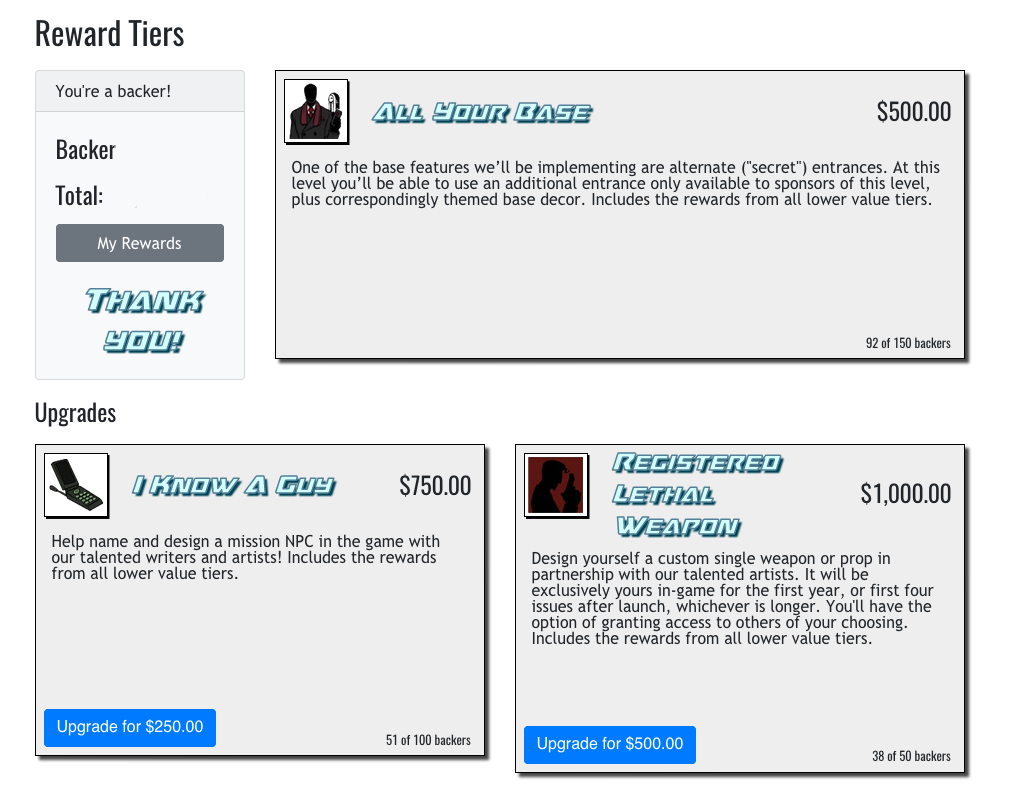 At checkout you’ll receive a confirmation of your purchases, and instructions for claiming your reward. For those people whose purchases include a copy of the Avatar Builder, you’ll be receiving a link to download the Launcher. To use that link you will need to be signed in to the store. Links cannot be shared, and will not work without a valid account.

Some rewards may require more coordination with our developers. In such cases, we'll be in contact with you to provide more information.

Some rewards listed on the store will only be offered in limited quantities and you’ll see the number available on each reward. Once those are sold out, those items will not be available for purchase, but may return at a later time. 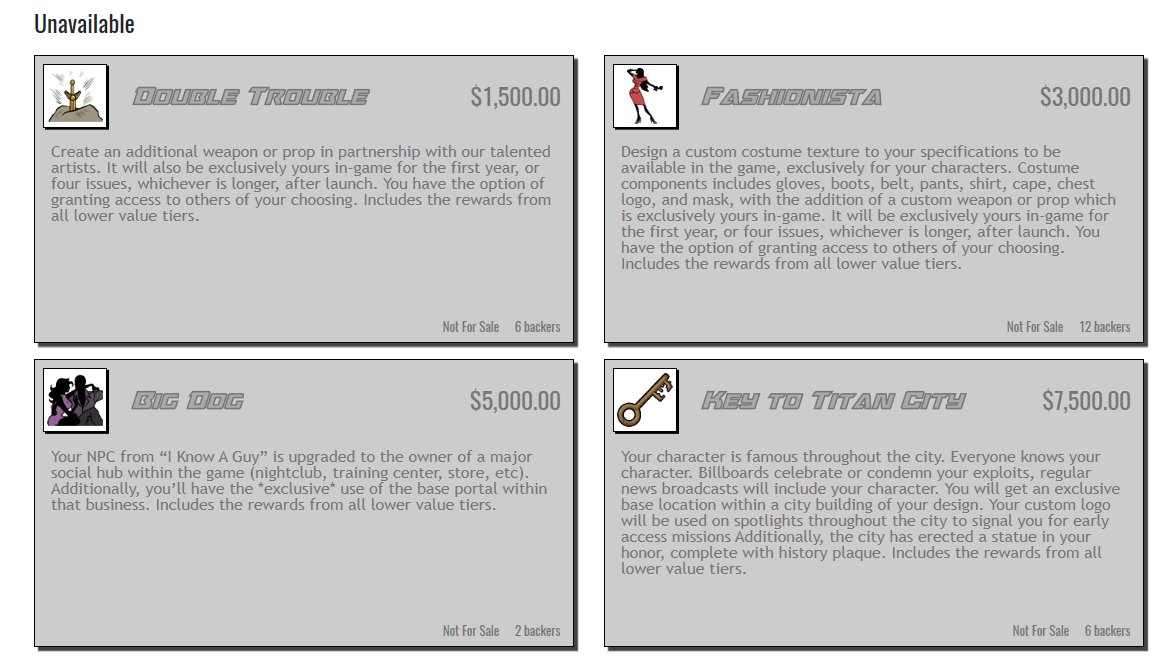 Note: images were taken from an earlier test version of the store. Items and availability may change.

The webstore is not just limited to Second Chance, either. It’s going to be a permanent feature of Missing Worlds Media’s online presence and will be open for purchases throughout development.

To help celebrate the release of the Avatar Builder, and to give you an opportunity to show what you can do, we'll be holding a Halloween themed costume contest. You'll be able to submit your best costumes between now and November 7th on this forum thread.

If you’ve been with us from the beginning, or if you’ve just found us, we thank all of you for your support. Without you, there’s no way we could have come this far. Now, with your help, we’re building a new world, a new frontier, a new experience for us all. It’s going to be a heck of a journey! Are you ready to take another step?

Feel free to discuss this update here: https://cityoftitans.com/forum/discuss-now-released-second-chance-and-avatar-builder
OR on our new public Discord! : https://discord.gg/7kVfsju