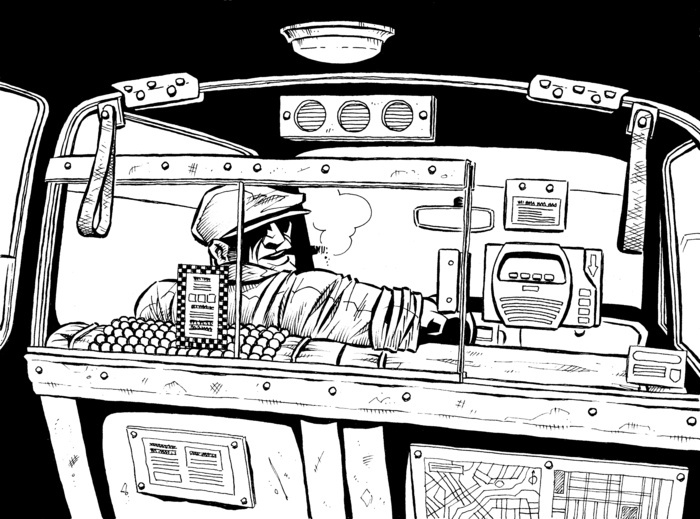 Hey, come on in! Hurry an' close the door, though, it's freakin' cold out there!

An' hey, if ya need to, I gotta rolla shop towels you can wipe yer feet off with there. Slush's everywhere by now, but I'm pretty sure that'll be done by this evnin'. Why? 'Cuz this is Titan City, an' when people get six feet a' snowfall 'round here, they take it as a challenge! 'Specially the mad scientists. See that guy over there yellin' 'bout "they never thought I'd fight back but I'll show them"? He's talkin' 'bout snowflakes.

Yeah, it's crazy, but 'ey it's my kinda crazy. It's a crazy that gets stuff done, y'know?

Hey, I almost forgot ta ask, where to? Oh, well, you're in luck! I always know who's open, even on days like this. Coulpla' interestin' things goin' on, in fact.

Normally, Frankie's in the park isn't open on cold days - what with all their seatin' bein' outdoors an' all. They got a weird deal goin' today, tho; they got one of those spooky mercs from that 'ifrit' bunch standin' there. Apparently he radiates enough heat it's like spring there, so folks can go there to enjoy some warmth and outside food.

Another place you could go to pretend like it's not the last, violently frigid death throes a' winter is the Bradford Shoppin' Arcade. They got all sortsa stores an' restaurants "out in the open" under a big cover with a "digital sky", whatever that means. But hey, they keep the temperature nice, so it's a fun place to spend some time.

There's also-- whoa! I'd wonder who just cleared the snow off E-street alluvasudden, but the 'Celerity is Awesome' posters kinda spell that one out. Yeah, lotsa showboaters out here takin' care a' stuff for free publicity. An' hey, why not? I keep my cab runnin' 'cause it's good advertisin'. You know, "I'll getcha where ya need ta go, come heck or frozen water."

Another winner for stayin’ warm is the main Edentech campus, the, uh, ETCBC, I think they call it. They got this kinda indoor rain forest thing goin’ on, an’ of course they gotta keep that warm year ‘round. They give guided tours, but really it’s best ta just wander.

Now, if you’re actually kinda okay with winter weather, we got some other places! The outdoor theater in Bradford has a thing goin’ on, even in this weather, Shakespeare in the Park, an’ they got hot food an’ old timey drinks, an’ they got bonfires to keep the cold off.

Meanwhile, Lake Verdandi’s frozen over enough to allow ice skating. Lotsa people doin’ that, which brings back memories, I tell ya what. ‘S how I met my wife!

Speakin’ a romance, there’s also the Briar Woods. Don’t let the name fool ya, it’s gorgeous this time a’ year. They’ve even got sleigh rides through parts, now that there’s snow, an’ you can see the roses that grow there. They’re a little subdued this time a’ year, but still look good. But, uh, don’t touch ‘em, okay? Seriously, don’t.

An’... an’ hold on. Gonna have to sit here a bit, there’s a-- yeah, you see it, right? I dunno how they got a robot that big onto the city streets, or why they built it with that many legs, but ‘ey it’s de-icing the road, so I guess I can’t complain. Oh, it’s looking this way, better wave. Yeeeah we’re all friends here in Titan City. So, you decided where you wanna go?

Really? Well, sure thing pal. Good day for that, too, an’ I’ll getcha where ya gotta go.