This past month we started working on the first of the digital assets backer rewards. The Mogul add-on seemed the most prudent place to start as building assets need to lay down as the map is built and before the mission structure, when at all possible.

The first step was a Survey Monkey backed survey sent out to the email address relayed from Kickstarter. It was pretty short and to the point.

We aren't setting a lot of limits on this, but there are some practicalities.

It needs to be thematically appropriate ( we probably can't pull off a Ziggurat ), it needs to be decent ( Bob's House of Adult Video Programming is probably not gonna work ), and it needs to not be someone else's IP.

It is a city and we're trying to keep it reasonably realistic. This will put some limits on the number of some types of structures. You might request something that's already allocated to lore, that might be a conflict.

In those situations, we'll try to work with you to either to merge or alter your thoughts into workable shape. For example, if multiple people request a library at the university we may ( if the library is large enough ) discuss dedicated wings to each requestor.

The survey asked two questions about the type and preferred name of the structure. On chance of conflicts or a choice that just wasn’t going to work, we asked for two additional of each as fallbacks.

We waited about two weeks for responses to roll in. Once we had a sizable chunk of the backers responses, we had a planning meeting with the key personnel from the departments that need to weigh in. Robin sat in, representing our Composition department. His role was to make certain that there was an appropriate places, or set of places, we can place the building and offer advice as to how to work with the Backer to make these things fit better where needed. Petalstorm ( that’s me! ) and DeathSheepfromHell sat in for art. I was there to keep things on visual feel and ‘Sheep makes sure the building is possible in a practical sense within UE4. WarCabbit and Doctor Tyche were also present, to focus on general game scope/feel issues and to make certain something didn’t get kiboshed that had been pre-agreed to during the kickstarter.

We had 68 responses in that first meeting. Almost every first choice passed the various checks, only a few had points to negotiate with the backers. And I have to say, there were some great ideas in there that will definitely add to the look, feel, and history of the game. It was fun seeing the reactions of the other Leads when the next item popped up. You could almost hear the gears turning on how to make use of the idea. Many times the second and third suggestions were tempting.

Once that pass was complete we handed the list off to our concept artist extraordinaire, Joerden Leigh to reach out to the backers in small groups and start working with the backers via email to sketch out and refine the concept based on the feedback from the meeting and translate it to concept art. Here are some pieces from the first group. Please keep in mind that each of these are at different stages with the Backer and aren’t necessarily final. 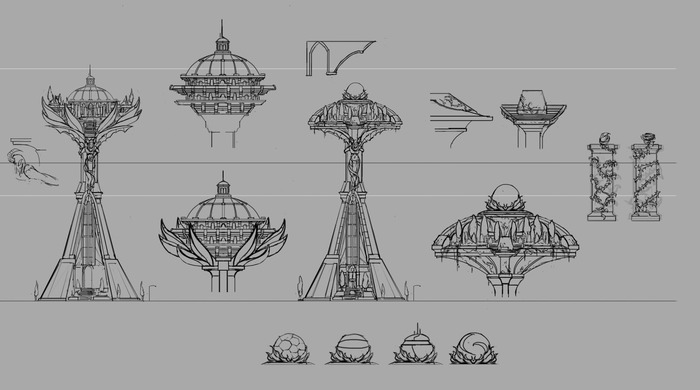 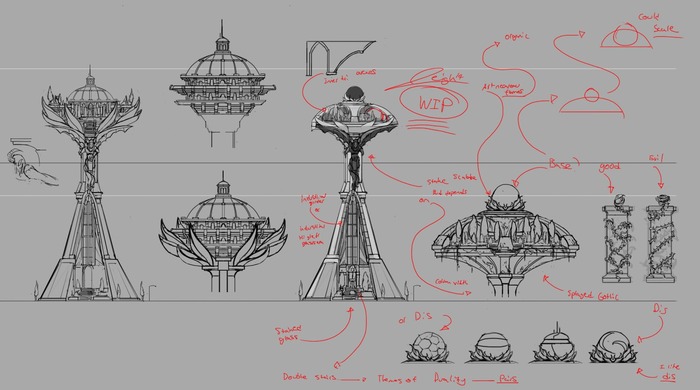 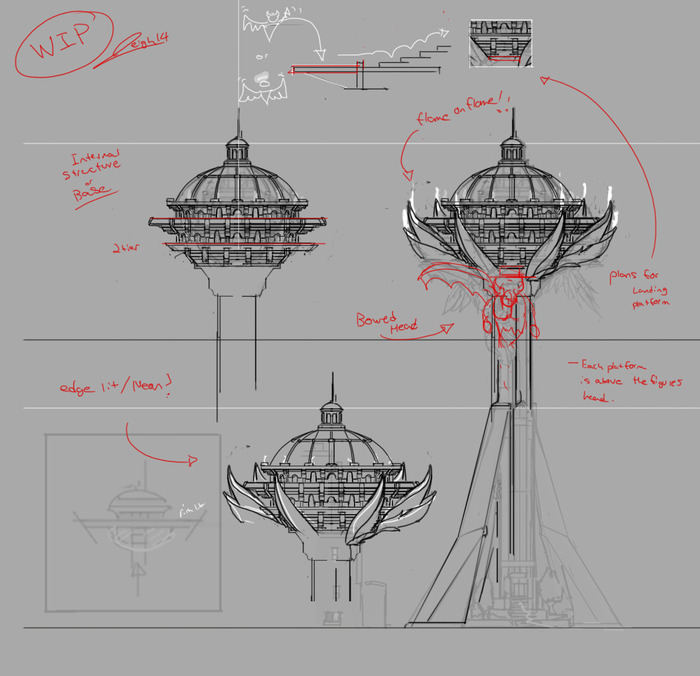 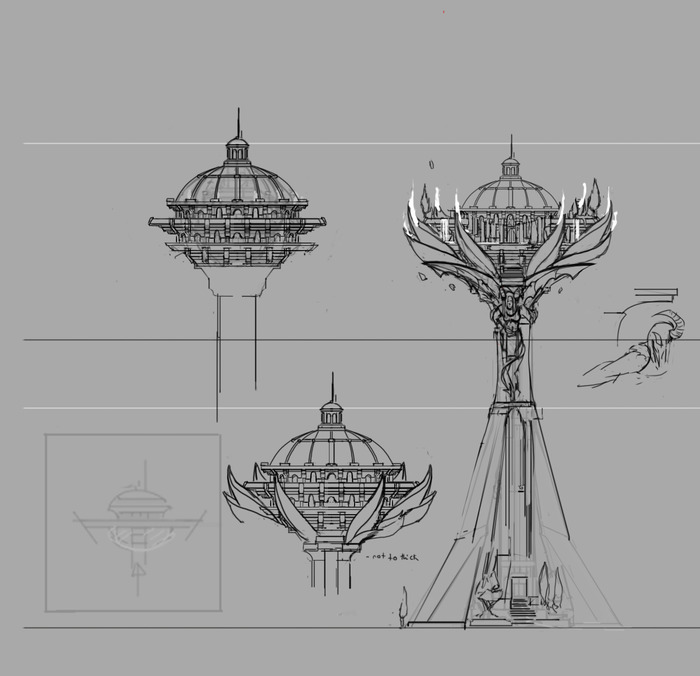 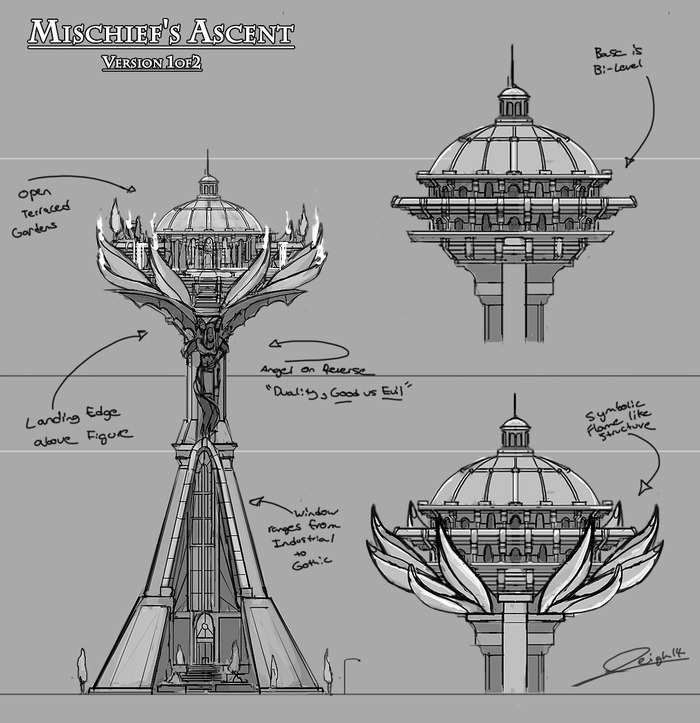 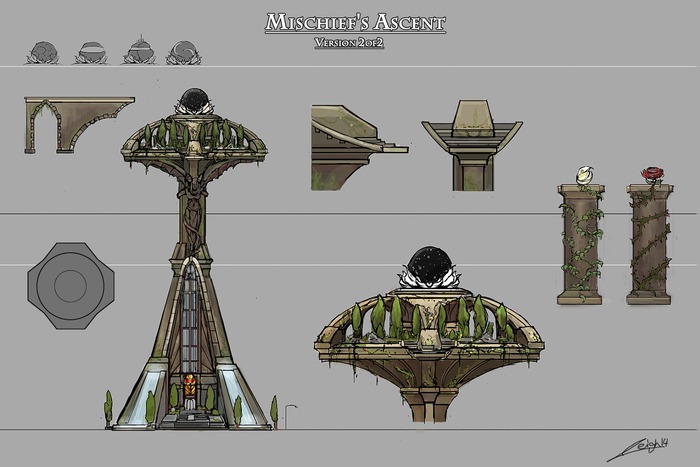 Next up, we have Vixens Inc. :A tall skyscraper with a large statue of a superheroine on top of it in a dramatic pose. 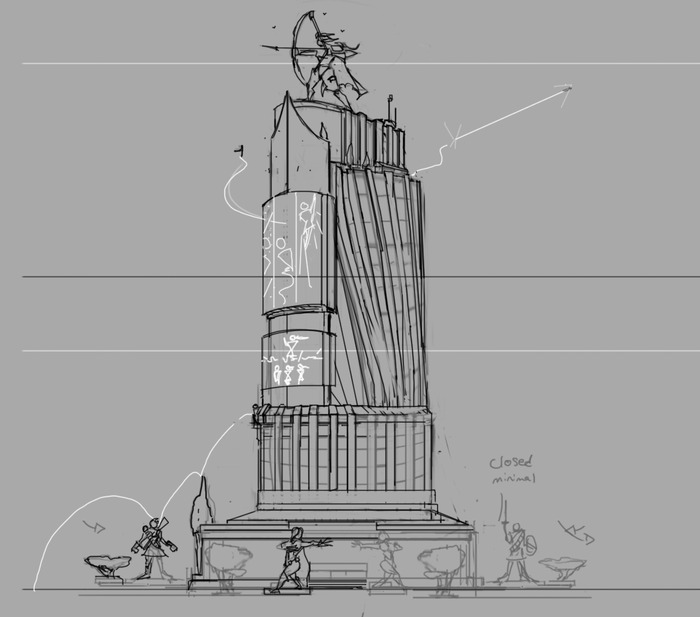 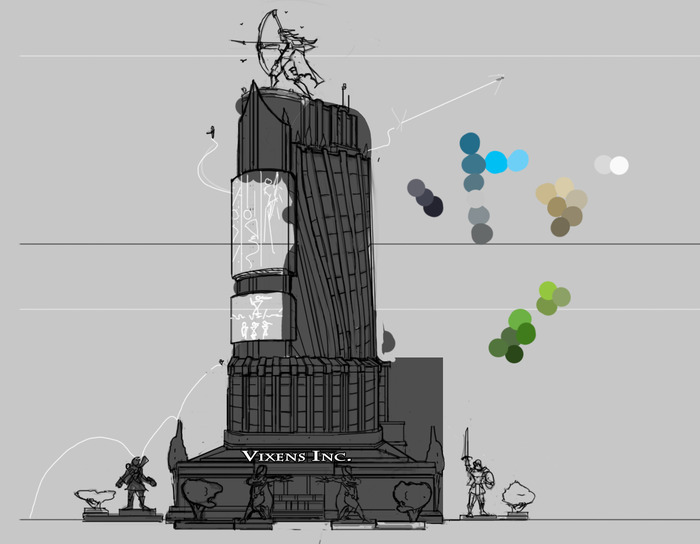 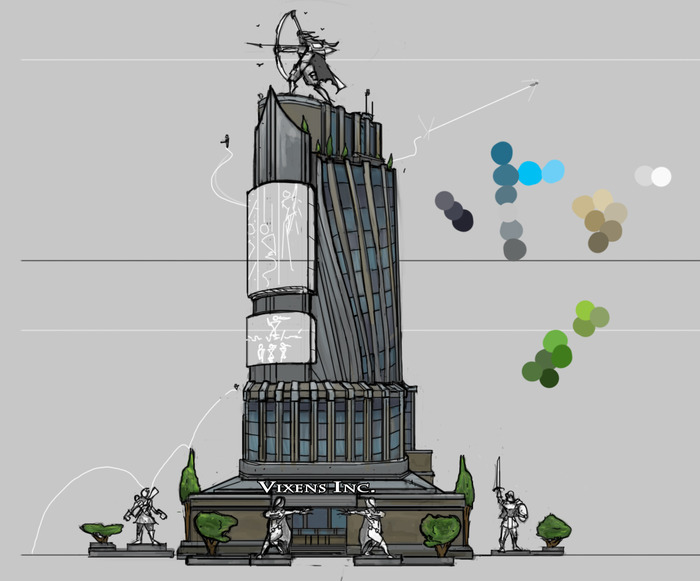 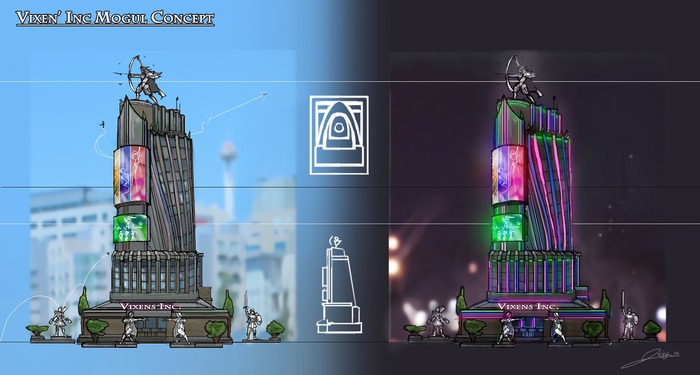 We even have a LITTLE bit of the 3D roughs started. 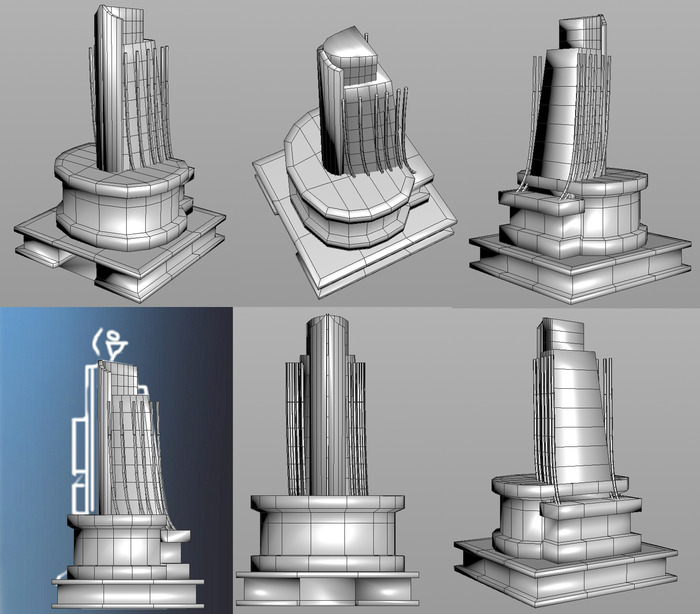 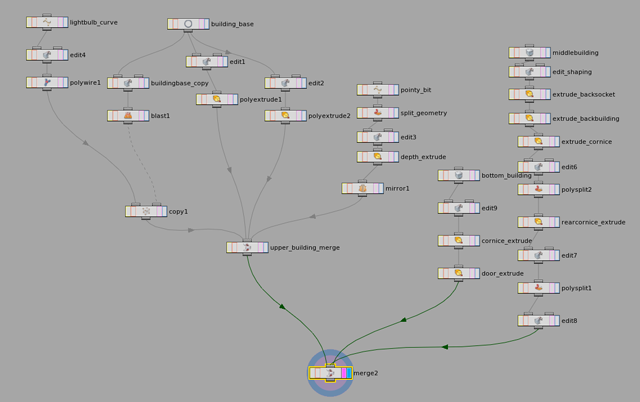 And next, Waterford-Johnson Enterprises: Office Tower 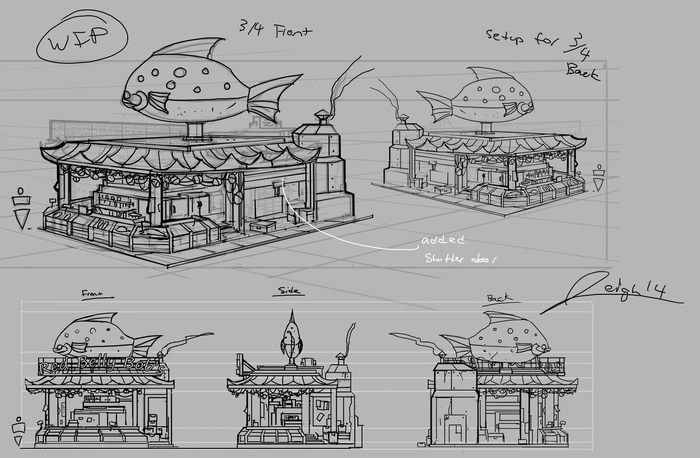 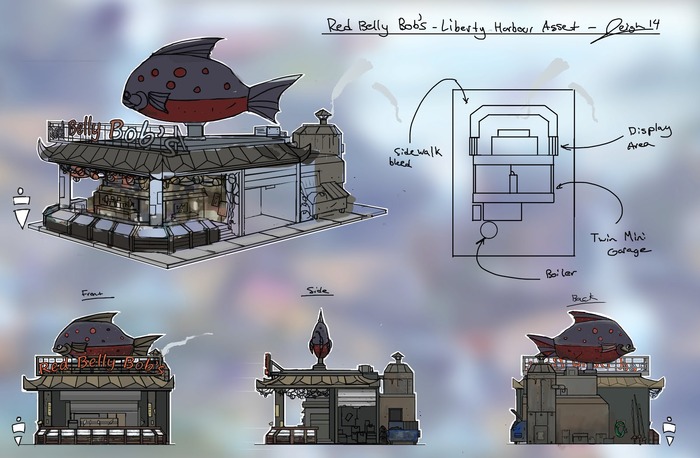 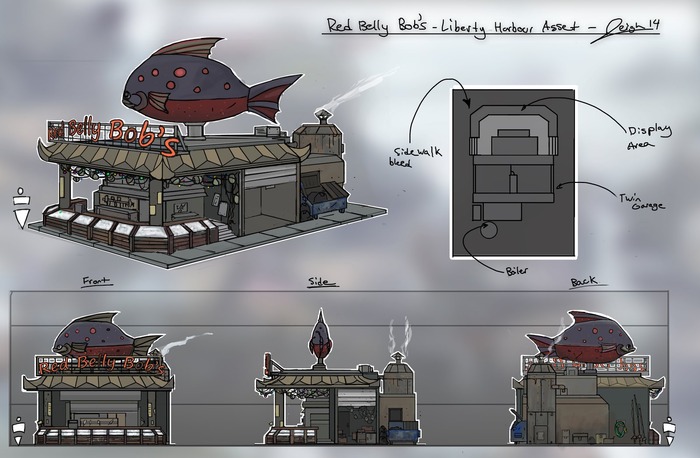 A note on this and other Backer rewards

At this point, we’ve sent out two surveys. Badges and Moguls. If you should have received one of these via your selections in the Perks Cart and have not filled it out, please check your spam filters for a Survey Monkey request. If you can’t find it, drop a line to

and make certain you mention your kickstarter email address - that’s how you’re tracked/associated.

If you’ve purchased any other rewards that will need a survey, they’re coming, we're getting to you. We’re going to be talking with the Fashionista, Lethal Weapon, and Double Trouble backers next. Watch the weekly updates for an announcement!

Oh! T-Shirts! The shirts should be winging their way to most of you. We had a small handful of address issues that need manual intervention and we felt it prudent to wait for this batch to wing its way out before pushing the next group out. This includes the Anthem, Shirt of the Month shirts. Again, watch the weekly updates for when these should be going out.

Finally, we have two pieces of in progress work. The first is the upcoming Shirt of the Month from Joerden Leigh and the other is some work that’s been keeping me very busy. 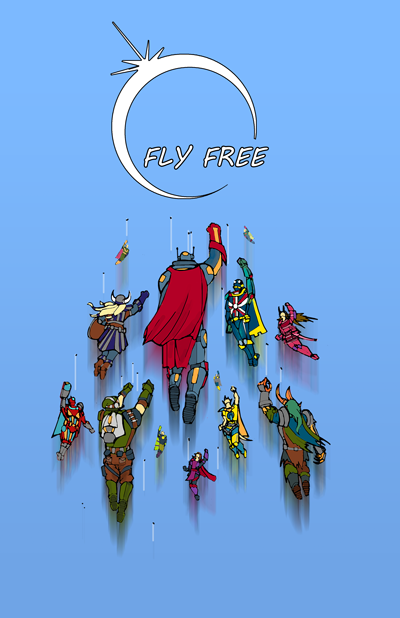 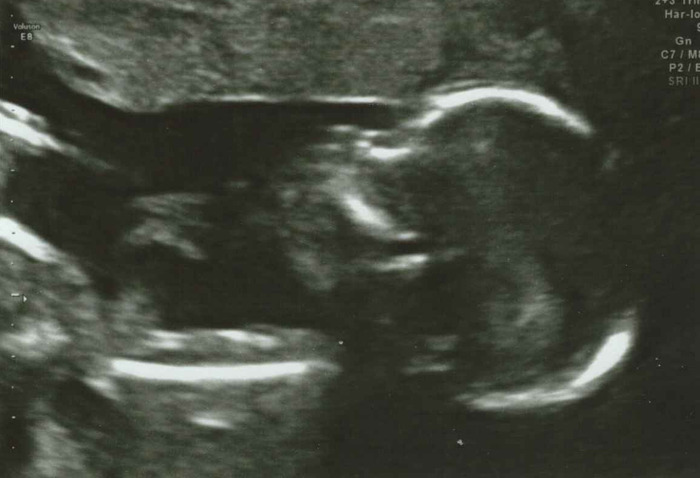